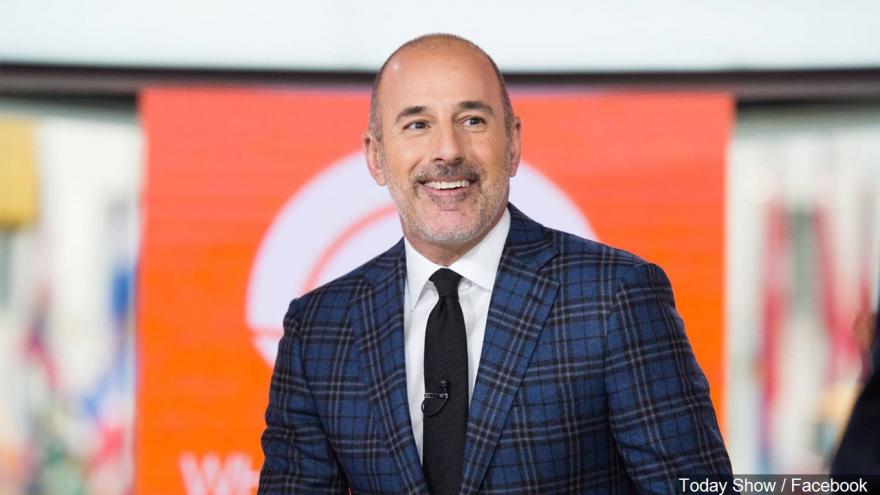 (CNN) -- When NBC News fired Matt Lauer two years ago, the network said an employee accused him of "inappropriate sexual behavior in the workplace." Now that employee, Brooke Nevils, is speaking publicly for the first time, and alleging that Lauer raped her in 2014.

The disturbing account is detailed in "Catch & Kill," a book by Ronan Farrow that comes out next Tuesday. CNN obtained a copy of the book ahead of its publication date.

Nevils told Farrow that she bled for days afterward. She said the incident "derailed my life." She eventually left NBC and received a seven-figure settlement payment.

"The story Brooke tells is filled with false details intended only to create the impression this was an abusive encounter," he said.

In a lengthy statement, Lauer admitted to extramarital affairs, including with former co-workers, but said "I have never assaulted anyone or forced anyone to have sex. Period."

Lauer also refuted other claims that have been made about his conduct at NBC, including the reports that his office had a button that let him lock the door from the inside. "There was no such locking mechanism. It didn't exist," he said.

Lauer and Nevils have very different accounts of what happened. But they agree that their first sexual interaction was in February 2014 when they were both in Sochi, Russia, covering the 2014 Winter Olympics.

Nevils told Farrow about a night of drinking with Lauer and others at a hotel bar. Nevils said she had six shots of vodka. According to Farrow, Nevils says Lauer invited her up to his room but, Nevils said she "had no reason to suspect Lauer would be anything but friendly based on prior experience."

Once inside the room, she says Lauer forced himself onto her and raped her.

Afterward, she said, "it hurt so bad. I remember thinking, Is this normal?"

"There was absolutely nothing aggressive about that encounter," he continued. "Brooke did not do or say anything to object. She certainly did not cry. She was a fully enthusiastic and willing partner. At no time did she behave in a way that made it appear she was incapable of consent. She seemed to know exactly what she wanted to do. The only concern she expressed was that someone might see her leaving my room. She embraced me at the door as she left."

Both Lauer and Nevils say that they later had consensual sexual encounters back at home in New York City.

"It was completely transactional. It was not a relationship," she told Farrow.

According to Lauer, "Our meetings were arranged mutually. At no time, during or after her multiple visits to my apartment, did she express in words or actions any discomfort with being there, or with our affair."

The encounters sometimes took place in Lauer's office at NBC.

Farrow wrote that when he interviewed Nevils, "she readily admitted that her communications with Lauer might have appeared friendly and obliging. But she also said she lived in terror of Lauer jeopardizing her career and that the encounters caused anguish and shame that eventually prompted her to break up with her boyfriend."

Lauer rejects the claim about his perceived power over her career, saying that "she did not work for me, the Today Show, or NBC News."

At the time, Lauer wrote, "she worked for Meredith Vieira (who had not worked for the Today Show in several years) in a completely different part of the network, and I had no role in reviewing Brooke's work."

Lauer wrote that he "ended the affair poorly," but said, "being upset or having second thoughts does not give anyone the right to make false accusations years later about an affair in which they fully and willingly participated."

Nevils' account is sure to prompt new questions about whether she felt protected by NBC.

Nevils told Farrow that she told "like a million people" about her experiences with Lauer. But she did not file a formal complaint.

The book describes Nevils as profoundly affected by the alleged rape, causing her to abuse alcohol and withdrawal from work.

"I just get so angry how this one thing derailed my life," she told Farrow.

NBC News spokespeople have insisted that management was not aware of any accusation against the "Today" show star until November 2017.

That's when Nevils confided in Vieira, according to the book, and Vieira urged her to get a lawyer and speak with NBC human resources.

Nevils did, and her attorney said that NBC took swift action at that point.

"My client and I met with representatives from NBC's Human Resources and Legal Department at 6pm on Monday," Nevils' attorney Ari Wilkenfeld said at the time. "Over the course of several hours, my client detailed egregious acts of sexual harassment and misconduct by Mr. Lauer. In fewer than 35 hours, NBC investigated and removed Mr. Lauer. Our impression at this point is that NBC acted quickly and responsibly, as all companies should when confronted with credible allegations about sexual misconduct in the workplace."

After the news of his firing broke, multiple news outlets published stories with other allegations of harassment by Lauer.

But no allegation of rape had emerged until now.

According to "Catch & Kill," Nevils did not use the word rape in her meeting with NBC HR. But her lawyer said it was "nonconsensual."

In the book, Nevils' account is presented as part of a broader picture of Lauer's alleged sexual misconduct.

The "Today" show covered the new allegations from Nevils on Wednesday morning.

"This is shocking. And appalling. And I honestly don't even know what to say about it," Savannah Guthrie said on the air.

NBC News issued a statement that read, "Matt Lauer's conduct was appalling, horrific and reprehensible, as we said at the time. That's why he was fired within 24 hours of us first learning of the complaint. Our hearts break again for our colleague."

Nevils has not responded to a request for further comment from CNN.