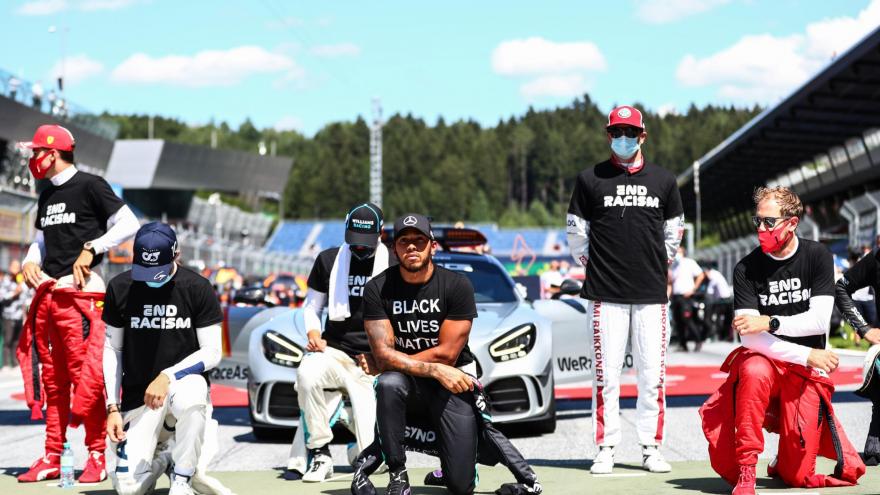 (CNN) -- The Formula One grid was divided ahead of the sport's return as several drivers, including Charles Leclerc and Max Verstappen, chose not to kneel in support of the Black Lives Matter movement.

All 20 drivers congregated on the start line before the Austrian Grand Prix, the first race of the season following the three-month delay due to the coronavirus pandemic.

Lewis Hamilton, who has been using his sizable platform to speak out against racial and social injustice, knelt on the front line wearing a Black Lives Matter T-shirt, while the rest of the drivers had "End Racism" written on theirs.

Before the race, Ferrari driver Leclerc posted a series of tweets explaining why he had chosen not to kneel alongside his peers.

"All 20 drivers stand united with their teams against racism and prejudice, at the same time embracing the principles of diversity, equality and inclusion, supporting Formula 1's and FIA's commitment," he wrote.

"I believe that what matters are facts and behaviors in our daily life rather than formal gestures that could be seen as controversial in some countries. I will not take the knee but this does not mean at all that I am less committed than others in the fight against racism."

Verstappen echoed Leclerc's comments, writing: "I am very committed to equality and the fight against racism. But I believe everyone has the right to express themselves at a time and in a way that suits them. I will not take the knee today but respect and support the personal choices every driver makes."

In total six drivers chose not to kneel. The other four were Daniil Kvyat, Carlos Sainz, Antonio Giovinazzi and Kimi Raikkonen.

The different stances were particularly stark coming less than two weeks after Formula One launched its "We Race as One" initiative, which is aimed at tackling racism and inequality.

Just days after the initiative was launched, former F1 boss Bernie Ecclestone was widely condemned for his comments on racism.

"In lots of cases, Black people are more racist than what White people are," the 89-year-old told CNN, leading F1 to release a statement and disassociate themselves from him comments.

Despite the extended break before the start of the season, normal service resumed on the track as Valtteri Bottas gave Mercedes top spot on the podium.

It was looking like Mercedes would finish with its two drivers in first and second, but Hamilton was given a five-second penalty just four laps from the end for his role in a collision with Red Bull's Alex Albon.

That allowed Leclerc to take second and gave young McLaren driver Lando Norris third place for his first ever podium in Formula One.

Hamilton hadn't won in Austria since 2016, with teammate Bottas taking one win and Red Bull's Max Verstappen taken the other two in the intervening years.

The six-time world champion had an uphill battle from the off, after being demoted from second to fifth on the grid less than an hour before the start of the race.

Hamilton had initially been cleared by the stewards for failing to slow down for yellow flags during qualifying, but was handed the grid penalty at the last minute after a complaint from Red Bull.

It was reported that the new evidence Red Bull provided to have the ban instated was a video posted on Formula One's Twitter account.

Red Bull boss Christian Horner said the footage had only been released by the race promoter on Sunday morning, which is why it wasn't available for the inquiry on Saturday.

Bottas put in a commanding drive to ignore the drama behind him and led the race from start to finish, despite a flurry of pressure moments following a number of safety cars' deployments.

Verstappen looked like the only driver capable of challenging the top two early on, but electric issues with the car forced the Dutch driver's early retirement on lap 11.

Four-time champion Sebastian Vettel's race was all but over after 31 laps following a collision with Carlos Sainz, the man who is replacing him at Ferrari next year.

The altered Formula One season, which has seen a number of grands prix canceled, continues with another race in Austria next weekend, before heading to Hungary.