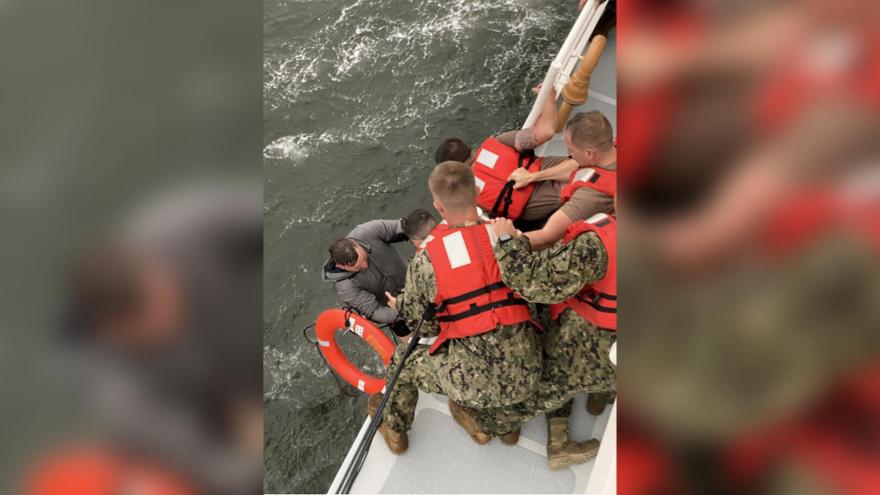 Six individuals have been rescued after a commercial vessel capsized in Louisiana.

(CNN) -- The US Coast Guard said Friday that four bodies have been recovered so far from the water near a commercial vessel that capsized earlier this week several miles south of Port Fourchon, Louisiana.

Divers recovered two more unresponsive people Friday. On Thursday, an MH-60 Jayhawk helicopter crew spotted a person in the water at 7:10 p.m. while searching the area, the Coast Guard said. The Coast Guard cutter Benjamin Dailey recovered the man and transported him to Coast Guard Station Grand Isle where he was pronounced dead. The body of one man was recovered on Wednesday.

Divers were hampered in their search Friday morning due to dangerous weather conditions and had to halt operations. But, they resumed their search again in the afternoon.

"Out of respect for privacy of the family members involved, the Coast Guard is not releasing the names of those rescued, recovered or missing," the US Coast Guard said in a statement.

Rescue crews are still searching for nine people, the Coast Guard said. Six people have been rescued so far and the capsized vessel has been declared a major marine casualty by the Coast Guard.

The Coast Guard's 8th District Headquarters said in a tweet that divers knocked on the hull of the capsized vessel Thursday but did not hear a response. Search operations had continued through the night with air and surface assets.

"Our rescue crews have been diligently continuing the search and rescue efforts for the missing people from the capsized vessel," said Capt. Will Watson, commander of Coast Guard Sector New Orleans.

He added that each case is dynamic and it is "always our hope to safely bring those people back and reunite them with their friends and families."

A 45-foot response boat, helicopter, plane, and cutter are currently involved in searching what Watson calls "a very fixed location" because the vessel is not drifting. Port Fourchon Parish has deployed a search boat as well, according to Watson, noting that the water temperature is above 70 degrees.

According to the US Search and Rescue Task Force, the human body can survive prolonged periods of time in the water as long as the temperature is around or above 70 degrees Fahrenheit.

Officials said the vessel is a 129-foot commercial liftboat known as the Seacor Power and operated by Seacor Marine. The details of where the ship was going and its mission are still under investigation. Liftboats are used to service oil platforms and other offshore assets like wind farms.

According to the Code of Federal Regulations, a major marine casualty is a casualty "involving a vessel, other than a public vessel" that results in the loss of six or more lives, more than $500,000 in property damage, hazardous material threat to life, property, or the environment, or the loss of a mechanically propelled vessel at or more than 100 tons.