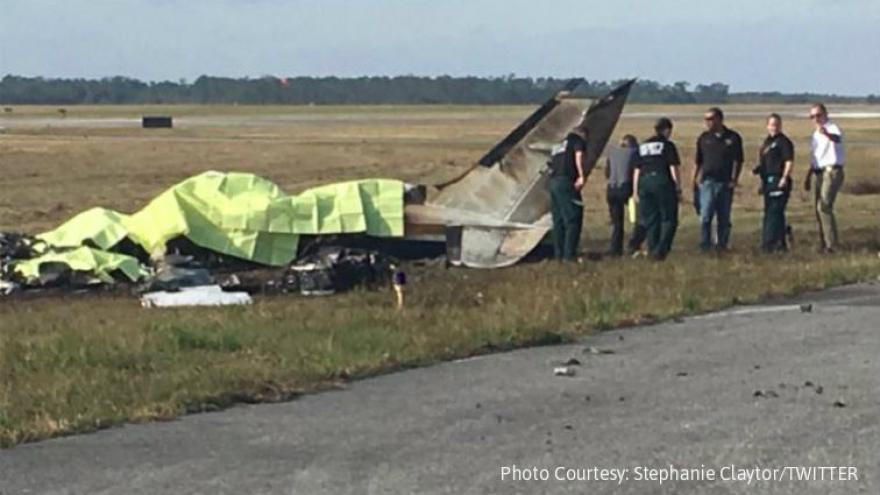 (CNN) -- Five people, including four members of one family, were killed when their twin-engine plane crashed during takeoff Sunday morning at a small airport about 40 miles east of Tampa.

The plane, a Cessna 340, was taking off from Bartow Municipal Airport just after 7 a.m. in a dense fog when it crashed and caught fire, said Polk County Sheriff Grady Judd.

There were no survivors and "no chance of survival," he said.

"It is a tragedy any day of the week," Judd said. "It is a worse tragedy on Christmas Eve."

The pilot was identified as 70-year-old John Shannon, an attorney from Lakeland, Florida. Two daughters, a son-in-law and a family friend were also killed, Judd said.

Family friend Krista Clayton, 32, was a teacher in Lakeland and a mother of two, Judd said.

Judd described John Shannon as an active member of the community, serving as president of the local Kiwanis Club and president of The Republican Club of Lakeland.

The group was flying to Key West where they planned to spend the day, Judd said.

An airport employee who was photographing the thick fog captured sound of the crash on video.

After reviewing the video, Judd said no one should have been taking off in that weather.

"You can hear the engine as it revved up and as the plane took off, and there's not one sign of the aircraft that was obviously soaked in a very dense, very heavy fog."

The NTSB and FAA will investigate the cause of the crash, he said. Polk County Fire Rescue was also on the scene.