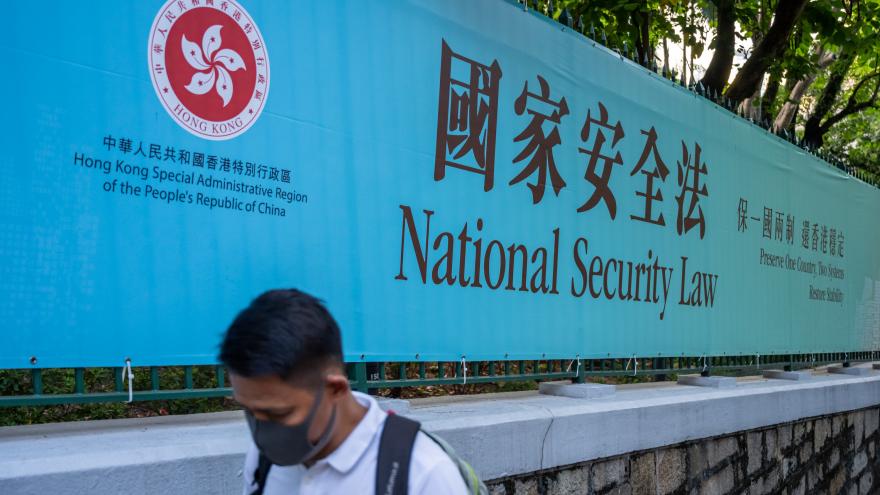 The arrests are among the first since the law was imposed on the city by China on July 1, which also criminalized subversion, terrorism, and collusion with foreign forces.

Police said those arrested were three males and one female, aged between 16 and 21.

Though the police declined to name the group or those arrested, the political group Studentlocalism said on Facebook that its members were among those apprehended, naming one as former leader Tony Chung.

Studentlocalism was one of several political groups in Hong Kong which announced it was ending operations in the city due to the new security law, though it did not delete its social media pages and said activists overseas would continue their work.

In a press conference late Wednesday, police spokesman Lee Kwai-wah said the organization had "posted about the establishment of a new party that advocates Hong Kong independence on social media."

"We have to enforce the laws even if the crimes are committed on the internet. Don't think you can escape from the responsibility in cyberspace and commit crimes," Lee added.

Police said the four were being investigated under Articles 20 and 21 of the security law, which deal with secession. Under the law, secessionist offenses of a "grave nature" can result in sentences of at least 10 years and up to life imprisonment, while lesser offenses carry penalties of between three and 10 years.

The Hong Kong government has defended the law as necessary to protect national security, and promised that it would only affect a tiny number of people. Up until Wednesday, police had made around 10 arrests under the new law, and charged one person.

Wednesday's arrests were greeted by widespread shock online, and will renew fears of a chilling effect under the new law. They come after Hong Kong University (HKU) this week sacked law professor Benny Tai, a longtime activist and leader of the 2014 Umbrella Movement protests, in a move he said marked the "end of academic freedom" in the city.

Soon after the arrests, a CNN reporter had a source cancel an interview, unrelated to the security law, "in view of the latest development in Hong Kong."

"So students are arrested because of a SOCIAL MEDIA POST," Nathan Law, a prominent Hong Kong activist who fled the city earlier this month, wrote on Twitter. "How vulnerable a country is to be afraid of a post by a group of teenagers?"

In a statement, Sophie Richardson, China director for Human Rights Watch, said the arrests were a "gross misuse of this draconian law (which make) clear that the aim is to silence dissent, not protect national security."

She added that they "raise chilling concerns of a broader crackdown on political parties" as September's legislative elections approach.

However, the chance of those elections going ahead as planned has been thrown into doubt this week, amid reports the government may exercise emergency powers to delay them to 2021, due to a recent rise in coronavirus cases in Hong Kong.

The nomination period for the election ends on Friday, with polls due to open on September 6.

The city has recorded over 100 new coronavirus infections every day in the past week, up from zero cases in late June. Wednesday marked the first day of the strictest social distancing measures Hong Kong has seen so far: masks mandated in indoor and outdoor public spaces, no more than two people per group when gathering in public, and no in-restaurant dining.

Ronny Tong, a member of Hong Kong's Executive Council or de facto cabinet, told CNN he does not know how long any delay might be, but that any decision to delay the elections would be due to public safety concerns.

"I hope people will understand that any delay is due to community safety and not political considerations. Hong Kong people still have a right to vote freely," Tong said.

The city's Registration and Electoral Office said it was "closely monitoring" the coronavirus outbreak in the city and its potential impacts the election and would "listen to advice from the Government and health experts."

Pro-democracy figures have denounced any suggestion of postponing the election. Activist Joshua Wong said the pandemic was an excuse, adding that the government was "afraid they will receive landslide loss in the upcoming election."

Opposition parties were aiming to ride a wave of discontent with the government to an historic victory in the semi-democratic legislature, where just under half the seats are controlled by so called functional constituencies, which represent business and society groups and are typically pro government.

A recent primary election designed to narrow down the number of candidates attracted over 600,000 votes, far more than the 170,000 or so organizers were hoping for attracting the ire of Beijing, which suggested the vote was illegally interfering with the upcoming poll.

Last year, pro-democracy candidates won a landslide victory in local council elections. A similar result in the legislative council could put them in a position to force a constitutional crisis by blocking the budget and pressuring Lam to resign. Both the Chinese and Hong Kong governments have suggested such a plan could be illegal under the new national security law.