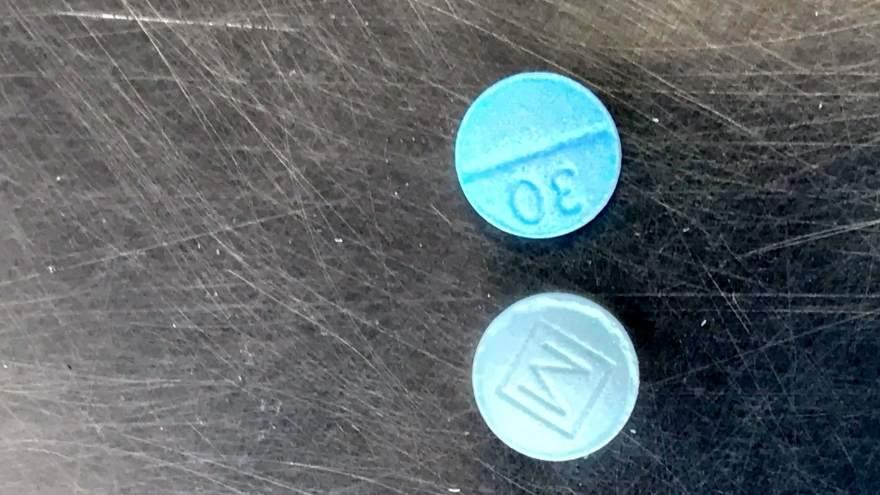 This is a picture of the blue counterfeit drug that has been related to several deaths since Wednesday. Source: San Diego Co Sheriff\'s Dept
By Madeline Holcombe, CNN

(CNN) -- In a 24-hour period, at least four people have died of overdoses likely from synthetic oxycodone pills, and now San Diego police are looking for the drug's supplier.

"Our detectives treat each of these overdose deaths as a crime scene, and we are following up on the source of supply for these illicit pharmaceuticals," San Diego County Sheriff's Undersheriff Mike Barnett told reporters Thursday.

A small blue pill called an M-30 has been circulating in San Diego County, Barnett said. It is a common, counterfeit oxycodone -- but it is known to contain fentanyl and/or carfentanil.

"Fentanyl is frequently involved in overdose deaths because a speck the size of a grain of salt or just one touch can kill you," according to a press release from the San Diego County Sheriff's Office.

Meaning, Barnett said, just one M-30 pill could easily have a high enough dose to be lethal.

It isn't clear to authorities yet whether those that obtained the pill knew that it contained fentanyl.

Barnett reminded the public at the press conference that any drug purchased without a prescription should be considered dangerous. Those who have purchased illegal pills can turn them in to their local law enforcement or drop boxes the San Diego County Sheriff's have at every station, Barnett said.

Police are still investigating exactly how many calls for medical services have been made since Wednesday due to these pills, but several other non-fatal overdoses have been reported.

In what experts call the current opioid epidemic, illicitly produced fentanyl, which is up to 100 times more powerful that morphine, has been a driving factor in overdose deaths. According to a 2019 CDC report, fentanyl deaths have skyrocketed in recent years going up 1,000% from 2011 to 2016.