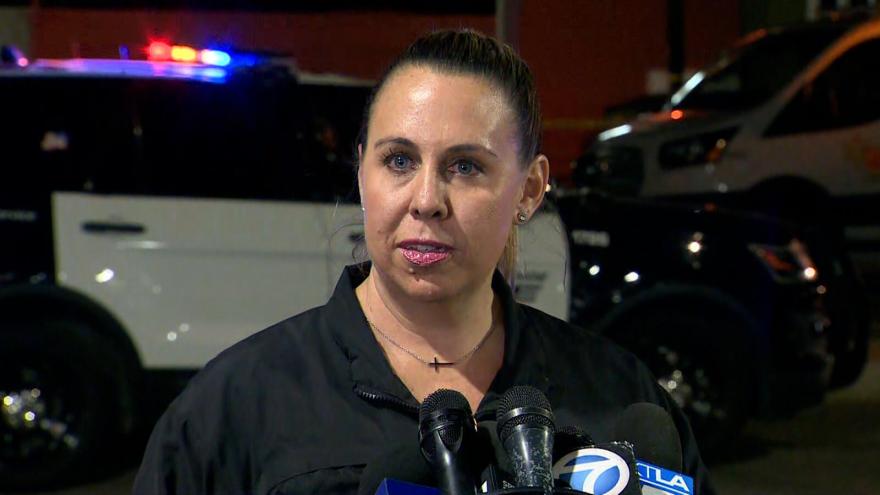 Lt. Jennifer Amat says four people, including a child, were killed in a mass shooting at an office complex in Orange, California, on March 31.

(CNN) -- The suspect who police say killed four people, including a 9-year-old boy, at an Orange, California, business complex Wednesday had professional and personal relationships with the victims, police said.

"The preliminary motive is believed to be related to a business and personal relationship which existed between the suspect and all of the victims," Orange Police Department spokesperson Lt. Jennifer Amat said in a news conference Thursday.

"This was not a random act of violence," she said.

Amat did not identify the victims, saying the notifications of next of kin had not been completed. Among the dead were two women, a man and the 9-year-old boy, she said.

The boy, who was found in the complex courtyard, is believed to be the son of one of the victims who worked at the business, Amat said. Amat said later Thursday investigators were working to confirm the relationship between the boy and any of the people at the scene.

A fifth victim, a woman, was found with the boy. She was taken to a local hospital, where she is in critical but stable condition, Amat said.

Police identified the suspect as 44-year-old Aminadab Gaxiola Gonzalez. He is also at a local hospital in critical but stable condition, Amat said.

CNN is working to determine whether Gonzalez is represented by an attorney who would comment on his behalf.

Amat said Thursday Gonzalez arrived at the complex in a rental car and parked it in a lot nearby. Gonzalez is believed to have been living in a motel room in Anaheim, Amat said.

Gates to the complex were locked from the inside, police say

The officers were at first unable to enter the building's courtyard because its gates on both the north and south sides "had been locked from the inside," Amat said, "using a bicycle-type cable lock."

Two officers engaged the suspect, she said, and an "officer-involved shooting" occurred.

Police were then able to enter the courtyard and found the suspect, who was injured, and took him into custody. Police had earlier said it was unclear whether his injury was self-inflicted.

In the courtyard, police also found the boy and the adult woman who survived.

"It appears that a little boy died in his mother's arms as she was trying to save him during this horrific massacre," Orange County District Attorney Todd Spitzer said at Thursday's news conference, though he later added the exact nature of their relationship was still under investigation.

The suites where some victims were found belonged to a business identified as Unified Homes, Amat said, a real estate business specializing in mobile homes.

Investigators recovered a semi-automatic handgun and a backpack containing pepper spray, handcuffs and ammunition, which authorities believe belong to the suspect.

Orange is about 30 miles south of Los Angeles. The complex where the shooting occurred houses multiple businesses including Farmer's Insurance, Calco Financial and Miller Counseling.

Authorities remained on scene Thursday to complete the investigation.

Spitzer said investigators from his office were at the scene of the shooting for two reasons: to investigate the mass shooting, as well as the officer-involved shooting aspect of the case, to ensure both objectivity and transparency.

Spitzer emphasized that the suspect is eligible for the death penalty under California law because there were multiple victims.

Prosecutors are also looking into whether the fact that the gates were locked constitutes "lying in wait," Spitzer said, a special circumstance that would also make the suspect eligible for the death penalty.

Spitzer said that over the course of his tenure he had reviewed nearly 20 murder cases for whether to pursue the death penalty, but he has never filed one death case.

"Asking a jury to pass down a verdict of death is the most serious consequence we ask, and it's the only consequence where a jury makes the decision as opposed to a judge," he said.

California has a moratorium in effect for its death penalty, under an executive order signed by Gov. Gavin Newsom in March 2019.

Paul Tovar told CNN affiliate KCBS/KCAL near the scene that he hadn't heard from his brother or his niece, both of whom work in the building.

"I'm just trying to find out his well-being," Tovar said. "He's not answering his phone, neither is my niece. I'm pretty scared and worried. I wish I knew more."

Tovar told CNN later Thursday morning he still had no news of his brother or his niece.

The FBI's Los Angeles division confirmed to CNN it had responded to the shooting as a matter of routine, but the Orange Police Department is the lead investigative agency.

This is at least the 20th mass shooting since the Atlanta-area spa attacks two weeks ago that left eight people dead. CNN defines a mass shooting as a shooting incident that results in four or more casualties, dead or wounded, excluding the shooter.

"I can tell you that we haven't had an incident like this in the city of Orange since 1997," Amat said. "It's just such a tragedy for the victims, their families, our community and our police department."

"Horrifying and heartbreaking. Our hearts are with the families impacted by this terrible tragedy tonight," Newsom said in a tweet.

Rep. Katie Porter, a California Democrat who represents Orange County, said she and her staff are monitoring the situation.

"I'm deeply saddened by reports of a mass shooting in Orange County, and I'm continuing to keep victims and their loved ones in my thoughts as we continue to learn more," Porter tweeted.