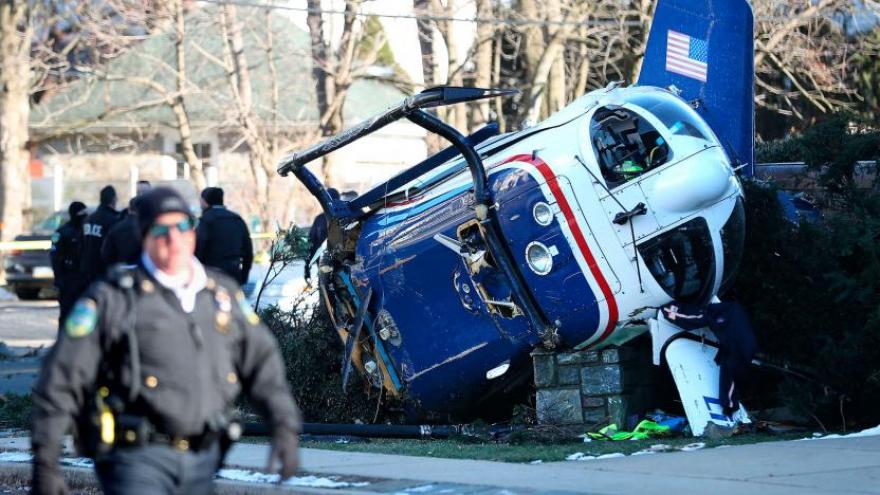 A medical helicopter rests next to the Drexel Hill United Methodist Church after it crashed in Penssylvania on January 11.

"At this time, there are no reported (injuries) to the public, responders, and only minor injuries to one of the helicopter crew members," police in Upper Darby Township tweeted.

The helicopter was transporting an infant from Maryland to the Children's Hospital of Philadelphia. Tim Boyce, Delaware County director of emergency services, said the infant was safely taken to the hospital via ground transportation after the crash.

According to officials, the helicopter crashed in front of a church in Drexel Hill just before 1 p.m. ET. Flight tracking website FlightAware shows the helicopter lifting off from Chambersburg, Pennsylvania -- 108 miles to the west -- about 45 minutes earlier.

A crew member helped get everyone to the top of the aircraft, Boyce said.

The Federal Aviation Administration said the craft was a Eurocopter EC135 and the National Transportation Safety Board would lead the investigation.

NTSB spokesperson Jennifer Gabris said: "The NTSB is investigating. I will share additional information when I have it."

The helicopter is registered to Air Methods and was from the LifeNet program. Air Methods provides medevac helicopter services using "the world's largest civilian fleet" of 400 helicopters in 48 states, according to a company website.

"Our team will cooperate fully with (FAA and NTSB) efforts to assess the cause of this unfortunate accident," Air Methods spokesperson Doug Flanders said.

Around the time of the crash, the weather in the area was partly cloudy. Winds were gusting around 20 mph, up to 25 mph just before noon.

Medevac helicopters have repeatedly come under fire from NTSB investigators who say more needs to be done to improve the safety of emergency medical flight operations. A 2018 crash of an Air Methods medevac helicopter in Wisconsin killed three on board, with the NTSB citing the pilot's loss of control.