Four people were rescued off a boat 'teetering' at the edge of a Texas dam, police say 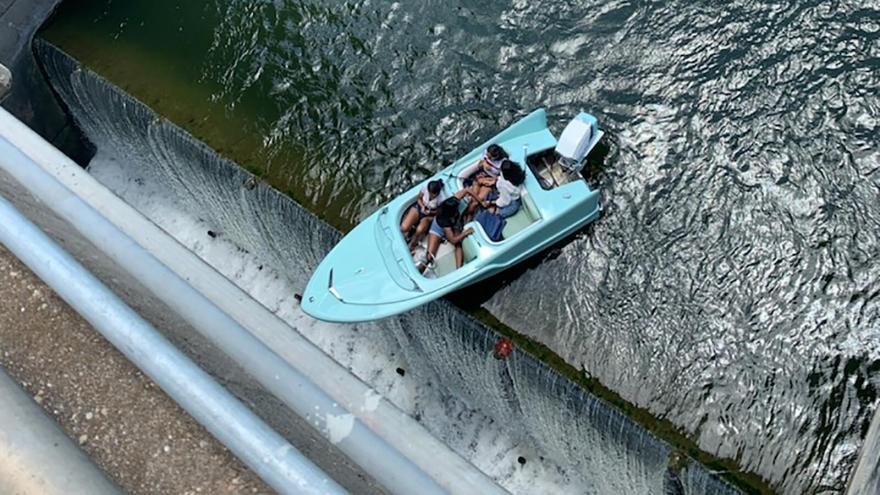 Four people were successfully rescued, after their boat got stuck, dangling over the Longhorn Dam in Austin, TX. Pictured here, rescue workers with Austin-Travis County EMS, STAR Flight and the Austin Police Department pull the boat to safety.

(CNN) -- When police in Austin, Texas, responded to calls about a boat at the edge of Longhorn Dam earlier this week, they found it teetering over the edge --- with four people aboard.

The group was rescued Thursday with the help of the Austin Police Department's lake patrol unit and other first responders. But the situation could have been a lot worse if the officers hadn't shown up so quickly, authorities said.

"This would have been very tragic had they gone over the dam," Austin Police Department Assistant Chief Scott Perry said in a Friday news conference. "It's a very high dam and there would have been probably severe injuries if not loss of life due to that."

The group, which was visiting from out of town, was touring Lady Bird Lake on an electric boat Thursday afternoon and got close to the dam's spillway, Perry said.

They were distracted and didn't notice the boat had passed two marked buoys notifying them to turn around, officer Bradley Smith, with the police department's lake patrol unit, said during the news conference. Smith was one of three Austin lake patrol officers who were part of the rescue.

"By the time they realized they were almost at the dam, they tried to turn around to avoid it but the suction was too powerful and pulled them against the dam," Smith said.

The boat got lodged on top of the spillway, Perry said, and did not have enough power to move away. The group called the boat service company, which was able to tie off the boat and prevent it from moving any farther, Smith said.

Lake patrol officers were already at the lake, Perry added, and were able to get to the two boats and pull them to safety.

The boat was so close to the edge of the dam it was basically "teetering" off it, Smith said.

"It was very nerve wracking, because approaching the boat, you have to make sure you don't wake it so it doesn't fall over the edge, but you still have to get there quick enough before it actually does fall off the edge," Smith said. "So it's a balancing act on our part."

The four people rescued were calm and not injured, authorities said. None of them requested emergency aid, according to a Twitter post from the Austin-Travis County EMS.