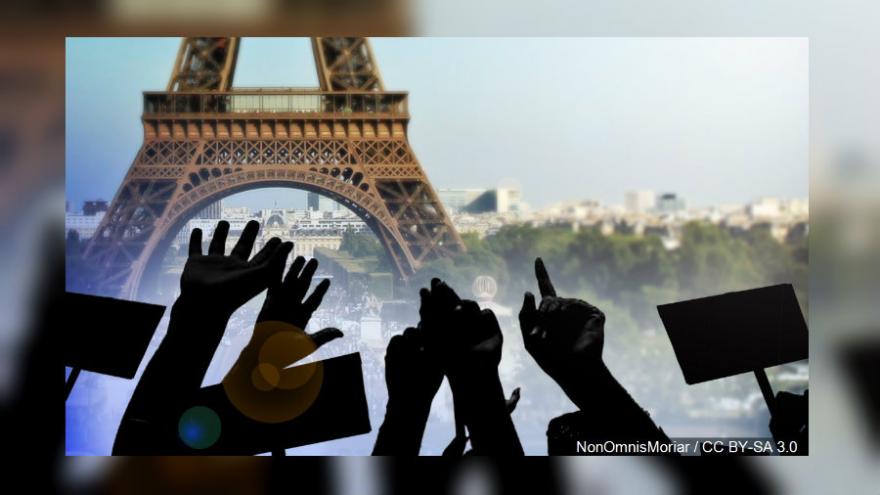 PARIS (AP) — The Latest on anti-government protests in France and neighboring countries (all times local):

France's interior minister says the protest violence in Paris is "under control" despite scattered tensions but is calling it "totally unacceptable."

Castaner estimated there were 10,000 yellow vest protesters in Paris on Saturday, among some 125,000 protesters around the country.

Protesters smashed store windows and set fires around Paris and clashed with police, who fired tear gas throughout the day in the French capital.

Dozens of French riot police backed by an armored vehicle are charging protesters on the Champs-Elysees in Paris, firing tear gas beneath the sparkling lights of one of the world's most elegant avenues.

Demonstrators in yellow vests carried a huge banner calling for President Emmanuel Macron to resign and for France to hold an emergency election.

Protesters appeared to throw flares as police responded with tear gas. The confrontation came after a day of tension across Paris on Saturday and unprecedented police efforts to prevent new violence.

The yellow vest movement started as a protest over a fuel tax rise but has expanded into an amorphous protest movement that French authorities are struggling to contain.

The police chief of Imperia, a northwestern Italian coastal town on the highway toward France, says yellow-vested French protesters have blocked the border with Italy near the town of Ventimiglia.

The Italian news agency ANSA quoted Police Chief Cesare Capocasa as saying the protest was causing a 6-kilometer (nearly 4-mile) backup of traffic in both directions on Saturday afternoon.

He was quoted as saying that "we're on the scene to try to manage the situation in a balanced way."

A march for the environment is unfolding peacefully in Paris and other cities in France, parallel to the violent "yellow vest" protests that have put much of the city in lockdown.

The "March for Climate" was a more diverse crowd, with far more women and older people and a handful of children. The "yellow vest" protests are overwhelmingly male, with just a few women for the hundreds of men pouring through the streets.

A handful of people in yellow vests had joined the quiet march by mid-afternoon. One sign read "No climate justice without fiscal and social justice."

Clashes have broken out between "yellow vest" protesters and police in the port neighborhood of Marseille, in the south of France.

An Associated Press journalist saw the fighting break out at midday at the port, one of the city's main tourist sites.

It was not immediately clear whether anyone was injured.

The "yellow vest" protests started as a revolt against a gas tax increase but have since grown to envelop an array of grievances against living standards and President Emmanuel Macron.

Belgian police are firing tear gas and water cannons at stone-throwing yellow-vested protesters near the country's government offices and parliament.

Protesters smashed street signs and traffic lights near a police barricade blocking access to the office of Prime Minister Charles Michel, as they chanted slogans calling on him to resign.

They threw paving stones, fireworks, flares and other objects at police.

About 100 have been detained, many for possessing dangerous objects like fireworks or wearing clothing that could be used as protection in clashes with police.

In the Netherlands, about 100 protesters gathered in a peaceful demonstration outside the Dutch parliament in The Hague. At least two protesters were detained by police in central Amsterdam.

Paris police are firing water cannons on yellow-vested protesters throwing flares and setting fires in one of the French capital's main shopping districts.

Scattered clashes are continuing around the city as the protesters seek to reach the presidential palace and demand President Emmanuel Macron's resignation. While the situation is tense, police appear to have it more under control than a week ago, when rioting and looting overwhelmed Paris security forces.

The latest flashpoint is not far from the flagship buildings of France's most famed department stores, Galeries Lafayette and Printemps, and near the Palais Garnier opera house. Protesters uprooted trees on one of the neighborhood's "grands boulevards" and set them on fire, while others hurled flares and other projectiles at rows of riot police.

Like several neighborhoods of Paris, the area is largely locked down, with many stores shuttered for fear of violence.

Overall police estimate there are about 8,000 yellow vest protesters in Paris on Saturday, down from last week.

Meanwhile the government deployed 8,000 police in the city, as part of exceptional security measures aimed at preventing a repeat of last week's rioting, which injured 130 people and struck a new blow to France's global image.

Belgian police are scuffling with yellow-vested protesters calling for the resignation of Prime Minister Charles Michel as hundreds of marchers try to enter the European quarter of Brussels.

Police used pepper spray on a small group of men who threw street signs, bottles and other objects as they tried to break through a barricade near the European Parliament.

Walking behind a banner marked "social winter is coming," the protesters have been chanting "(French President Emmanuel) Macron, Michel resign."

The rallies, which started at different locations around the city and converged on the European quarter, have disrupted road and rail traffic.

Dozens of people were searched at stations.

Police have warned people to stay away from the area.

Police are seizing protective equipment from journalists and barring some provincial "yellow vest" protesters from boarding trains to Paris, as part of exceptionally stringent security measures to prevent a repeat of last week's rioting.

A group of four protesters who came to Paris from Normandy on Saturday told The Associated Press that they saw people wearing yellow vests turned away at train stations all along their route. They said fellow protesters trying to reach Paris from Toulouse in southern France reported the same problems.

A national police spokesman said officers stationed at train stations around the country are under orders to verify all passengers and turn away any carrying equipment that could be used to "cause damage to people or property."

Paris police have fired tear gas on a group of yellow-vested protesters trying to march on the French presidential palace and are pushing them back with shields.

Crowds of protesters first tried to march down the Champs-Elysees avenue toward the Elysee palace but were prevented by rows of police. So a group of a few hundred took side streets and tried to get past a police barricade, and police fired back with tear gas.

Most of the protesters remain peaceful, and there are no signs so far of the rioting and looting that marked a similar protest last Saturday and prompted fears of greater violence this week.

Crowds were also gathering across town around the Bastille plaza.

Police are searching people throughout zones of central Paris and confiscating goggles and gas masks from journalists who use them to protect against tear gas while covering demonstrations.

A crowd of "yellow vest" protesters is marching down the Champs-Elysees avenue in central Paris surrounded by exceptional police security amid fears of new violence.

Hundreds of people gathered early Saturday around the Arc de Triomphe, which was damaged in rioting a week ago. They then started walking peacefully down the avenue, lined with high-end shops normally bustling before the Christmas holidays but boarded up this Saturday amid worries of more looting or other damage.

A Paris police spokesman said more than 170 people have already been detained Saturday on suspicion they were planning violence, though most were later released.

President Emmanuel Macron's government is deploying 89,000 security forces around the country for Saturday's protests against his reforms.

The French yellow vest protest movement is crossing borders, with demonstrations planned in neighboring Belgium and in the Netherlands.

Neither country has proposed a hike in fuel tax — the catalyst for the massive and destructive demonstrations in France in recent weeks.

Hundreds of police officers are being mobilized in Brussels Saturday, where yellow vest protesters last week clashed with police and torched two police vehicles. More than 70 people were detained.

Some rallies are taking place outside the main European Union institutions, which are closed Saturdays. Some could be held in the city center on what is a major Christmas shopping weekend.

Jan Dijkgraaf, editor of a Dutch "resistance newspaper" is calling for peaceful protests in the Dutch cities of Amsterdam and Rotterdam.

Paris monuments and shopping meccas are locked down and tens of thousands of police are taking position around the country, fearing worsening violence in a new round of anti-government protests.

President Emmanuel Macron's government has warned that Saturday's "yellow vest" protests in Paris will be hijacked by "radicalized and rebellious" crowds and become the most dangerous yet after three weeks of demonstrations.

Authorities are deploying barricade-busting armored vehicles and 8,000 police in the capital alone, part of 89,000 security forces fanned out around France.

The Eiffel Tower and Louvre are shut along with hundreds of stores and businesses, fearing damage after rioting last Saturday that saw 130 people injured and the worst urban unrest in Paris in decades.

The protesters are angry at Macron and high taxes, among other problems.