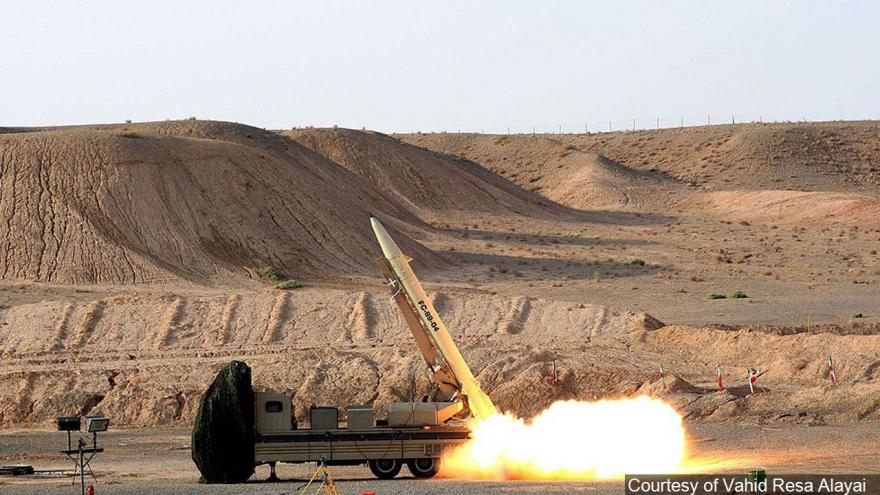 (CNN) -- Ambassadors from France, Germany and the UK have again alleged that Iran has developed nuclear-capable ballistic missiles, in a joint letter addressed to the United Nations Secretary-General officially released by the UN on Wednesday.

The ambassadors listed four examples of activity indicating nuclear-capable missiles, adding that "Iran's developments of nuclear-capable ballistic missiles and related technologies is inconsistent" with a UN resolution restraining the country from doing so.

The European countries -- all signatories to the 2015 Iran nuclear deal -- have previously written to the UN about Tehran's alleged nuclear activity, claiming "these activities are the latest in a long series of advances in Iranian ballistic missile technology."

Iran is believed to possess the largest and most diverse ballistic missile arsenal in the Middle East, according to US intelligence assessments, with a substantial inventory of close, short and medium range missiles that can strike targets throughout the region.

The newly released letter cites footage of a flight test for a new Shahab-3 ballistic missile, which is estimated to have a range of approximately 600 miles.

"The Shahab-3 booster used in the test is a Missile Technology Control Regime category-1 system and as such is technically capable of delivering a nuclear weapon," says the report.

The letter notes that the Shahab-3 has been equipped with a new maneuverable re-entry vehicle that is "likely to both improve the accuracy of missiles produced in future and enable existing missile stocks to be upgraded, increasing their accuracy."

The development of a viable maneuverable re-entry vehicle is a significant technological marker which in theory allows a ballistic missile to circumnavigate standard missile defense systems.

For years, efforts have been made by the US and its allies to curtail the possibility of Iran developing a nuclear armed ballistic missile. These efforts formed a key part of a 2015 deal intended to restrict Tehran's nuclear ability in return for lifting international sanctions.

US President Donald Trump withdrew the US from the agreement in May 2018. But it is still supported by five other nations -- Britain, China, France, Germany and Russia.

UN Security Council Resolution 2231, which endorsed the Iran nuclear deal, called on Iran to refrain from activities related to ballistic missiles designed to be capable of delivering nuclear weapons.

In July this year, Iran test-fired a medium-range ballistic Shahab-3 missile, according to a US official with direct knowledge of the event. According to experts, the missile test did not technically violate any UN resolutions -- which has been a source of frustration to critics of the Iran deal.

The US has previously reiterated that Iran must end missile testing as one of 12 conditions it has laid out for an end to the maximum pressure campaign the Trump administration implemented after it left the Iran nuclear deal.

Iranian Foreign Minister Javad Zarif criticized the latest letter from the European nations, describing it on Twitter as a "desperate falsehood to cover up their miserable incompetence in fulfilling [the] bare minimum of their own #JCPOA obligations," referring to the acronym for the 2015 nuclear deal.

CNN has reached out to Iranian government authorities for reaction.

Accusations in the letter come as US intelligence agencies and the Pentagon tracked the movement in recent weeks of a number of Iranian short-range ballistic missiles into Iraq, a US official with direct knowledge of the situation said.

CNN earlier reported there is fresh intelligence of a potential Iranian threat against US forces and interests in the Middle East, according to several US defense and administration officials.

While some of the missiles allegedly moved into Iraq may be categorized as ballistic, the official emphasized that they are very short range, without offering more details.

The concern is the missiles could now be moved into areas where they could be fired at US troops by Iranian-backed militias. Senior US military officials, however, have said recently that they don't believe the regime in Tehran is likely to go to war against the US.

In a related development, the official said that in the last month these militias have stepped up attacks against US positions with larger rockets than had been seen before.

Iraq has been rocked by protests in recent weeks, some targeting Iran, which has seen its influence in its neighboring country increase substantially in recent years amid US draw down. Tehran called on Iraqi authorities to respond "firmly and effectively" after protesters attacked the Iranian consulate in the southern city of Najaf last month.

On Sunday, Iraqi Prime Minister Adil Abdul Mahdi said he would resign, and called on Iraq's government to "act in the interests of Iraq; to preserve the blood of its people; and to avoid slipping into a cycle of violence, chaos and devastation."

Iran has also seen high levels of unrest, with the government launching a major crackdown -- including shutting off the entire internet for periods of time -- after protests broke out over gas prices morphed into nationwide anti-government unrest.