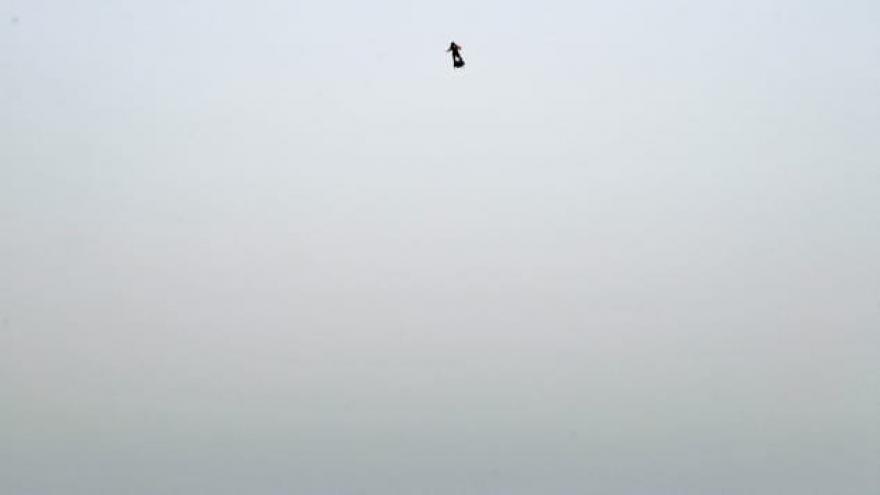 (CNN) -- Some people swim the English Channel between Britain and France, others prefer to sail. French inventor Franky Zapata has attempted to make the crossing on a jet-powered hoverboard -- but failed.

Zapata, a former jet ski racing champion, took to the skies Thursday on his Flyboard Air vehicle but missed a platform mounted on a boat as he tried to land midway for refueling, Reuters reported. The 40-year-oldwas uninjured in the fallinto the sea.

He was around 11 miles from the finish at St Margaret's Bay, England, according to French news channel BFMTV.

The daredevil, who took off at around 9 a.m. local time (3 a.m. ET) from from Sangatte in France, was attempting to mark the 110th anniversary of the first aerial crossing of the Channel. He hoped to make the 22-mile (35km) journey in 20 minutes.

Footage from his launch showed Zapata climbing up onto a platform in the French coastal town, stepping onto his flyboard and then flying off into the horizon.

The flyboard looks like a chunky skateboard and is powered by five small engines. It is fueled by kerosene, which Zapata carried 104 pounds of in his backpack, Agence France-Presse reported.

He was due to pick up a second pack of kerosene at the mid-Channel refueling stop.

The inventor captured the world's imagination when he took to the skies above Paris at Bastille Day parade on July 14 with the board that can reach an altitude of nearly 500 feet -- with the potential to go much higher -- and a speed of 87 miles per hour.

While the Bastille Day flight only used "3% of the machine's capacity," a successful crossing of the Channel will take "99.9%," Zapata told CNN ahead of his Channel crossing. He warned that wind strength could be his biggest obstacle on Thursday.

Zapata said he believed he had a "30% chance" of making it across, and admitted to feeling greater pressure now that there is a lot more interest in his exploits.

"When you fly with your body, even your hands affect the direction you want to go in. You feel the turbulence and the air through your fingers," Zapata told CNN.

"It's like becoming a bird. But it's also very hard. I have to fight against the wind with my legs so there's pain too. It's not as peaceful as it looks."