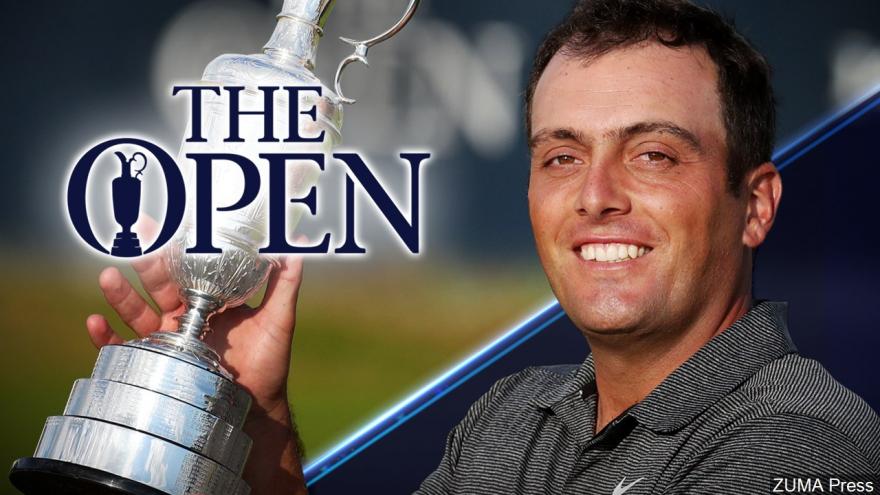 The 35-year-old held off an early surge from Woods and overhauled the back-pedaling defending champion Jordan Spieth to clinch the historic Claret Jug Sunday.

Molinari, the world No.15, kept his nerve playing in the circus that surrounds Woods to win by two shots on a sun-baked, breezy afternoon on Scotland's east coast, saying afterwards he was in "disbelief."

He fired a round of 69 to finish eight under ahead of four-time major winner Rory McIlroy, Americans Kevin Kisner and Xander Schauffele and England's former US Open champion Justin Rose.

Molinari was on the practice putting green -- "I couldn't watch, I don't know how my wife does it," he said -- when Schauffele, the only man who could beat him, came up short in the final group.

"It's amazing to sit here with the Claret Jug," Molinari told a later news conference.

"I look at all the names on the jug and they're the best golfers in history -- and to be on there, it's incredible. For someone like me coming from Italy, which is not really a major golf country, it's been an incredible journey."

Woods' seemingly impossible dream of a 15th major and first for 10 years looked a very distinct possibility when he took the lead with nine holes to go, but the former world No.1 struggled over the back nine to fall away.

The 42-year-old had cast a spell over Carnoustie this week on his first return to the Open for three years after multiple back surgeries -- with rousing support on every hole reminiscent of his heyday.

As he moved into contention Saturday, the Carnoustie crowds were thinking the unthinkable: that Woods could go from being in so much pain that he couldn't get out of bed a few years ago to closing the gap on Jack Nicklaus' record of 18 major titles.

But after edging into the lead he tripped up with a double bogey on the 11th and couldn't quite recover, ending five under with fellow American Kevin Chappell and England's Eddie Pepperell.

Woods admitted it will "sting for a little bit" but said he had learned perspective from close friend Serena Williams, the 23-time women's tennis grand slam champion.

"I'm sure she'll call me and talk to me about it because you've got to put things in perspective," Woods, who will climb back into the world's top 50, told reporters.

"She just had a baby and lost the Wimbledon finals. Given where I was, to where I am now, I'm blessed."

Woods was joined for some "pretty significant hugs" on the 18th green from his children Sam and Charlie, saying to them, "Hopefully you're proud of your pops for trying as hard as I did."

"It's just so special to have them aware because I've won a lot of golf tournaments in my career, but they don't remember any of them," he said.

"The only thing they've seen is my struggles and the pain I was going through."

Molinari said he was inspired in golf by watching countryman Costantino Rocca go so close to winning the Open at St. Andrews in 1995, only to lose out to American John Daly in a playoff.

And having played alongside Phil Mickelson when the American won the Open at Muirfield in 2013, he finally clinched his maiden major at the 36th attempt, a year on from missing the cut in the Open at Royal Birkdale.

The two-time European Ryder Cup player has been in fine form this season with a first PGA Tour win -- and by eight shots -- and victory in the European Tour's flagship BMW PGA event at Wentworth in May.

He knew he was playing well, but he was wary of a course -- often dubbed "Car-nasty" -- which had "beaten him up" a few times over the years.

The tough Sunday conditions made it a day for hanging on to what you had in contrast to the fireworks of Saturday.

England's Nick Faldo won the 1987 Open with 18 straight pars in the final round and Molinari was doing a good imitation.

He compiled 13 straight pars before edging ahead with a birdie on the 14th and then sealing victory with another birdie at the last.

His closing run of 37 holes in a row without a bogey was instrumental in bettering his previous best finish in a major of tied second at last year's US PGA Championship, won by Justin Thomas.

Molinari has been working for more than two years with performance coach Dave Alred, who was instrumental in Luke Donald's rise to world No.1 in 2011. Alred was also the mentor of English rugby player Jonny Wilkinson, who kicked the winning drop goal in the 2003 World Cup.

"He's a personality and a figure that I was missing and the whole team was missing," Molinari told CNN Sport earlier in the week.

"He pushed us all a little bit more. You can see the results, the difference that he's made."

Molinari is now assured of making Europe's Ryder Cup team for the clash against the US in Paris in September.

In his previous two Ryder Cup outings, he teamed up with his brother Edoardo in 2010, and scored a half point against Woods to secure outright victory in his singles match in the 2012 competition in Chicago, dubbed the "Miracle of Medinah" after Europe fought back to win from a seemingly impossible position.