Fraternity, four men to be sentenced in 2013 hazing death 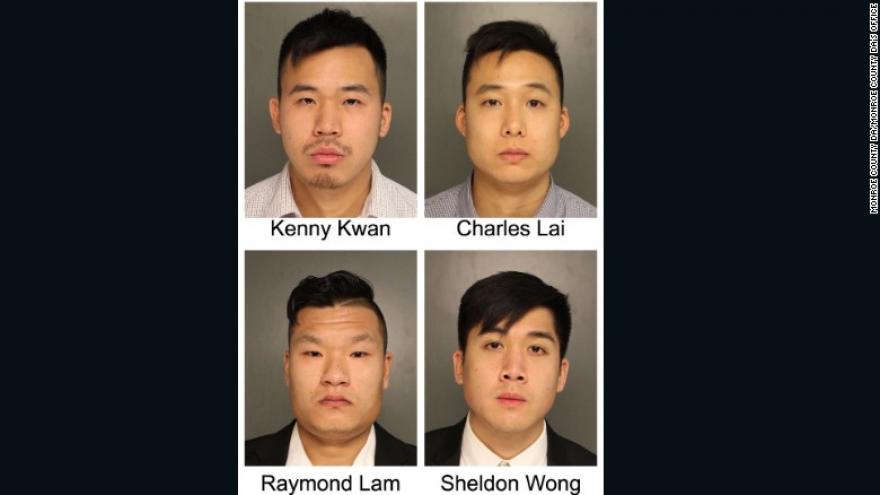 (CNN) -- A national fraternity and four men are expected to be sentenced Monday for charges related to the 2013 hazing death of Baruch College student and fraternity pledge Chun "Michael" Deng. Experts say the punishment could influence other cases that involve hazing deaths.

In May, four Pi Delta Psi members -- Kenny Kwan, Raymond Lam, Charles Lai and Sheldon Wong -- pleaded guilty to felony charges of voluntary manslaughter and hindering apprehension in Deng's death, which was the result of a hazing ritual.

At the time, Baruch College said that Deng died participating in an unsanctioned fraternity pledging event that the school had no knowledge of, adding it had a "zero tolerance policy regarding hazing."

Pi Delta Psi ended its affiliation with its Baruch College colony, saying it had "violated the values and rules of our organization." Individual members involved also had their fraternity memberships revoked.

According to its website, the Asian-American fraternity has a presence on at least 25 college campuses across the country, most of which are based in the Northeast.

Pi Delta Psi Inc. and its lawyer did not respond to CNN's requests for comment.

"There can be no question that the death of Michael Deng was tragic," said Todd Greenberg, an attorney for Lam.

"To a lesser extent it's also a tragedy for Mr. Lam and the other young men. They never intended for this to happen," he said, adding Lam had been "guilt ridden for his conduct since the day it happened."

An attorney for Wong told CNN, "Sheldon remains, and will always be, deeply saddened and devastated by Michael Deng's death."

Lawyers for the two other individuals could not be reached for comment Sunday.

Deng, an 18-year-old freshman at the New York City college, died in December 2013 during Pi Delta Psi's "crossing over" weekend for pledges, according to a criminal complaint. The fraternity chapter held the event at a rented house in Pennsylvania's Pocono Mountains.

It was there Deng ultimately suffered and died from a traumatic brain injury while participating in "the glass ceiling," a ritual that required pledges to run through a line of fraternity brothers who shoved, pushed and tackled the aspiring members to the ground.

At some point, Deng, who was blindfolded and wearing a weighted backpack, fell, struck his head and was immediately unconscious, according to police. Some fraternity members placed Deng by a fire while others searched the internet for his symptoms and tried to wake the pledge.

Meanwhile, the criminal complaint said, other fraternity members were told by a member and the national fraternity president to "protect the fraternity and hide all the memorabilia" from police -- including clothes, fraternity paddles, banners and signs. They were also instructed to conceal cellphones, marijuana and mushrooms, the complaint said.

Deng arrived at a nearby hospital for treatment 2 hours after he was injured -- a delay that a forensic pathologist concluded "significantly contributed to the death of Mr. Deng," the complaint said.

Deng's death was ruled a homicide, with forensic analysis revealing "at least three clear impacts to the head," rendered by forces "considered significant and severe."

"It would take hundreds of pounds of impulsive loads and/or hundreds of G forces in order to cause the damage to the interior of the brain," the criminal complaint said.

Four fraternity pledge deaths in 2017 overshadowed the case against Pi Delta Psi and its members. However, experts say university communities across the United States will be paying close attention to Monday's sentencing for indications of how other cases may be handled.

Piazza died as the result of a hazing ritual called "the gauntlet," which involved pledges drinking excessive amounts of alcohol. Afterward, Piazza fell several times, resulting in a traumatic brain injury and a laceration in his spleen that ultimately proved fatal.

Even after it was clear he needed medical attention, fraternity members didn't call for help for at least 12 hours. A criminal presentment in the case detailed an alleged coverup, in which pledges were told to clean up evidence of alcohol and keep quiet about what happened. One member allegedly deleted video evidence from inside the house as police came to collect it.

Still, there are crucial differences — particularly the role of alcohol. Whereas Piazza consumed at least 18 drinks in 82 minutes, according to video surveillance, Deng's toxicology report revealed no alcohol or other "substances of abuse."

Doug Fierberg, an attorney for Deng's family, said prosecutors in the Piazza case could learn from the outcome of the Deng case and Pi Delta Psi case sentencing.

"These are two of the higher profile circumstances involving the prosecution of hazing," said Fierberg. Prosecutors in the Piazza case, he said, "might as well learn" from the outcome of the Deng case.

Fierberg said he expects the Deng case "will help clarify" some things ahead of the Piazza case and could set "a number of precedents."

"Number one," Fierberg said, "national fraternities can and should be held criminal and civilly responsible for the injury and death caused by their members. The criminal prosecutions shows that can happen and should proceed that way and they can be convicted."

In regard to civil responsibility, Fierberg said the Deng case will show fraternities can carry the blame, and not just individual students who were involved.

"There are reasons why young men die year in and year out at fraternities," Fierberg said. "And the ability to reduce those incidents rests within the control of the national fraternities and universities, not solely in the lap of the men who are on the ground."

Not all legal experts believe the Pi Delta Psi case will impact the Piazza case.

Monroe County Assistant District Attorney Kimberly Metzger, the prosecutor in the Deng case, said on Friday the two cases are "very different" and that "it would be inappropriate to comment on what (prosecutors in the Piazza case) might learn from our case."

The outcome of the Pi Delta Psi case could also have an impact beyond Pennsylvania, said CNN legal analyst Joey Jackson, who predicted a "chilling effect" on universities and fraternities nationwide.

"I think there's a reckoning here," Jackson said, comparing the attention placed on recent hazing deaths to last year's #MeToo movement, which became a "tipping point" in how the public addresses sexual misconduct.

"For whatever reason, this has reached a crescendo, and we're focused on it now," Jackson said. "I think you will see forceful prosecutions in other jurisdictions and I think they can learn a lot from prosecutions in Pennsylvania." Universities, he said, will pay attention.

Hank Nuwer, a journalist and professor at Franklin College in Indiana who has been tracking and writing about hazing deaths since the 1970s, agreed with Jackson's assessment.

Nuwer said the verdict against Pi Delta Psi and looming sentence "strengthens the arsenal" for cases like Piazza's and others involving hazing.

Parents of victims and activists "don't think there's enough being done" in these cases, Nuwer said, and are pressuring courts to take a harder look at hazing deaths than they have in the past.

"Judges are taking it more seriously," said Nuwer, adding that lawyers who didn't know how to bring a case against fraternities in the past now have greater understanding of how to handle such cases.

"I'm seeing huge changes from 1978 when my first article appeared," he said. "These are important cases right now. That's going to be interesting to see how magistrates and juries look at fraternities now."

Hopefully, Jackson said, whatever sentence Pi Delta Psi receives, "it deters other fraternities" and ensures they enact policies to protect members and pledges.

"They'll learn from the lessons of Pennsylvania," Jackson said. "You're going to see aggressive prosecutions until this stops and that's the way it is."