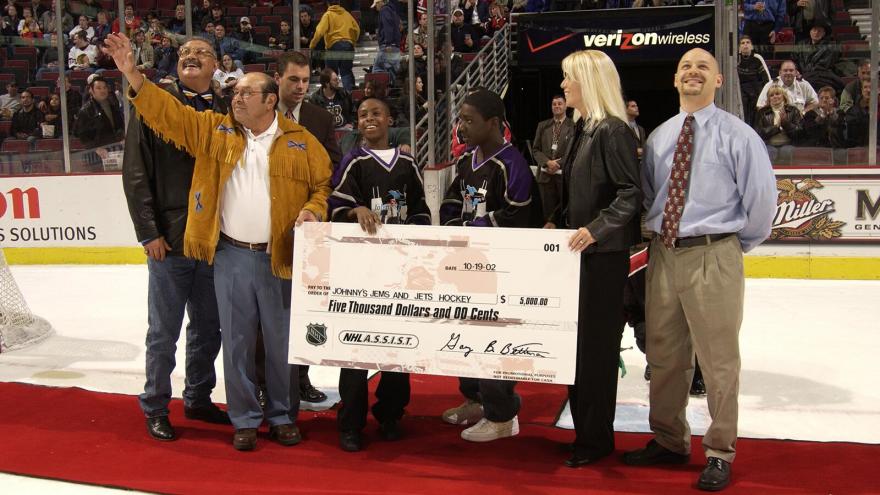 Fred Sasakamoose reacts as he is presented with a check for Johnny's Jems and Jets Hockey team during a ceremony celebrating at the United Center on October 19, 2002 in Chicago, Illinois.

(CNN) -- Fred Sasakamoose, the National Hockey League's first Indigenous player, died Tuesday at 86, according to his son Neil Sasakamoose, who delivered the news in an emotional video on Facebook. Fred Sasakamoose's death came five days after being hospitalized in Saskatchewan, Canada, with Covid-19.

Sasakamoose played 11 games for the Chicago Black Hawks during the 1953-54 season, according to NHL's website. He is widely believed to be the first Indigenous player in the league's history, though the NHL tells CNN this is impossible to determine.

An outpouring of respect has come from across the NHL following the news of Sasakamoose's death.

"That lasting impact of his legacy will forever be celebrated and continue to bring people together for generations to come," the Black Chicago Hawks organization said on its website. "To the entire Sasakamoose family that includes his wife, Loretta, four children and over 100 grandchildren and great-grandchildren, the Chicago Blackhawks organization extends our deepest condolences."

NHL Commissioner Gary Bettman said in a statement that Sasakamoose was the first Cree player to appear in an NHL game at age 19. Sasakamoose then dedicated his life to "serving the First Nations community -- using hockey and other sports to provide opportunities for Indigenous youth," Bettman said.

"The story of Sasakamoose's groundbreaking, 11-game NHL career with the Chicago Black Hawks in 1953-54 was the culmination of years of dedication to overcoming adversity in pursuit of a dream, and the pivot point at which he turned his focus to helping others pursue their dreams," Bettman said.

Bryan Trottier, who is also of Indigenous heritage and is a Hockey Hall of Fame center, called Sasakamoose "a pioneer, somebody looked at with First Nation blood who was an achiever, broke barriers," according to NHL's website.

"He didn't realize how inspiring he was, which makes him a humble man, which, to me, is much like Jean Beliveau and Gordie Howe and all of those guys who we hold in such high regard," Trottier said.

Reggie Leach, who played for the Boston Bruins, California Golden Seals, Philadelphia Flyers and Detroit Red Wings, said he didn't know about Sasakamoose until he was 16. He felt proud to be of First Nation heritage when he found out about Sasakamoose, the NHL website said.

"He was one of the players that we wanted to be like him and play in the National Hockey League," Leach said. "He accomplished his goal and that was a big feat at that time in the 50s, being First Nation and playing in the NHL. If you think back, it's unbelievable the things he had to go through and what he went through going to residential school and accomplishing what he did. It's just amazing."

Residential schools "were part of a government-sponsored, religious education system designed to assimilate the country's Indigenous children. The schools, which began in the 1880s and closed in 1996, were rife with abuse," according to the NHL.

The Blackhawks honored Sasakamoose in 2002 and the Edmonton Oilers did the same in 2014 as part of their Celebration of First Nations Hockey, the NHL said.

Sasakamoose was inducted into the Saskatchewan Sports Hall of Fame in 2007, according to the NHL.

Neil spoke to his father on the telephone mere hours before his passing and said he seemed in good spirits and was unafraid of what may lie ahead.

"I'm not scared, I'm ready to go, if I gotta go, I'm going to go," Neil recalled his father saying.

"You know what, dad? If you're tired, you go. You go and don't worry about us over here. You go. If you're getting tired and you're getting beat up and your body is fighting, you go ahead and you go," Neil told his father.

Neil said his mother Loretta -- his father's partner of 65 years -- was currently in lockdown, as were Neil's sisters. Prior to his death, Sasakamoose lived on the Ahathkakoop Cree Nation reserve in Saskatchewan.

Sasakamoose has an autobiography scheduled to release in the spring of 2021, titled "Call Me Indian: From the Trauma of Residential School to Becoming the NHL's First Treaty Indigenous Player."