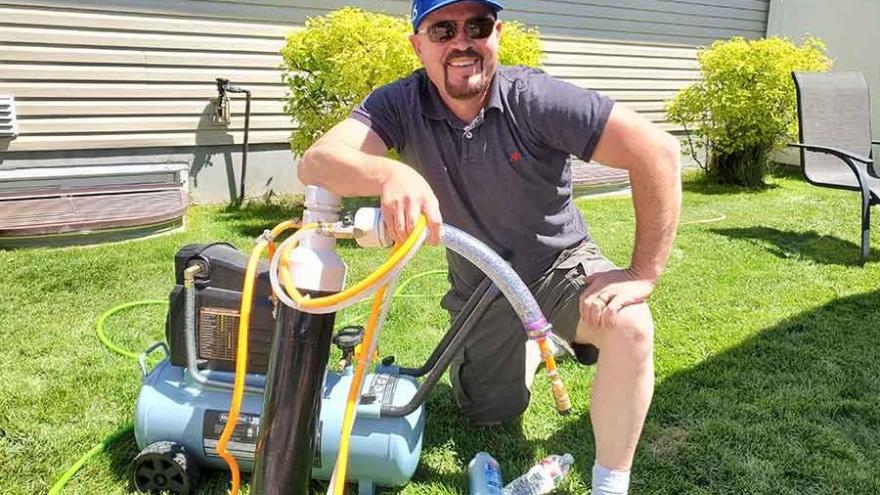 Darwin Arnold, also known as the “Honey Do Carpenter,” spent years as a crane operator, but when half a ton of steel fell and crushed his leg, he found himself out of work.

Complications from the accident left him unable to operate a crane so he got a job delivering frozen pizzas to grocery stores. But constantly carrying heavy boxes day in and day out took a toll on his injured leg.

“We were just desperate to do something,” Darwin said.

One day, a friend was helping Darwin’s wife Melanie with some things and noticed furniture and other items Darwin had built.

That friend was Julieanne Siddoway – a local YouTuber from Rigby whose channel, Dirtpatcheaven, has more than 142,000 subscribers.

She suggested that Darwin and Melanie could earn some extra money through YouTube.

“She said, ‘This is what I do. I’ll help you,'” Melanie said. “She showed me what to do and told me to just follow my husband around with a camera.”

That’s what Melanie did. Darwin set to work crafting all sorts of things such as folding tables, teeter-totters, children’s furniture and more while Melanie filmed. That’s when the Honey Do Carpenter YouTube channel was born.

Those early videos topped out at 200 to 300 views each. They didn’t even get enough subscribers for Darwin and Melanie to monetize the channel.

“One day Melanie found a video on this aircrete dome and said, ‘You have to build me one,'” Darwin said. “So I said ‘OK,’ like a fool because I had no idea how I was gonna do it.”

Aircrete is an aerated form of concrete that is light-weight and has super insulative qualities. It is made by substituting the rocks and gravel traditionally used in concrete mixtures with foam.

A foam generator is an essential tool for creating aircrete. To build the aircrete structure his wife wanted, Darwin was going to need a foam generator but those currently on the market are designed for industrial use and can be prohibitively expensive.

“If I don’t have a tool, I will build the tool,” Darwin said.

He managed to get his hands on the blueprints for an industrial foam generator and began studying them, finding which components he could eliminate and which ones could be substituted with cheaper materials.

After some trial and error, he created the Foam Mate – a foam generator that could be built by almost anyone for $30.

“I told Melanie that I think I figured out a way to create this foam so that we can infuse it and mix it into cement, and she needed to come watch me build this thing,” Darwin said. “I did it right on my benchtop table, and she filmed it and she edited it.”

She had also written down the instructions on how to build the Foam Mate.

“I wanted to set up an Etsy store and sell the directions for it,” Melanie said.

The only problem was is that she didn’t know what to call the various components or the tools Darwin used to put it together.

“Like, a hose clamp was called a ‘clampy thing,'” Darwin said. “A three-eighths brass hose barb nipple to her was ‘that shiny pokey thing.'”

After Melanie posted the video, titled ‘Air Crete Machine for Under $30 (DIY)’ Darwin began his pizza delivery route for the day.

At his first stop, he checked to see how the video was doing and was shocked to see that it already had more than 500 views. At his next stop, it had shot up to more than 1,000 and continued to get more and more views throughout the day.

When he finished making all of his deliveries, he rushed home to share the good news with Melanie. As he told her about it, he noticed her phone hadn’t stopped receiving notifications the entire time he had been talking to her.

Melanie explained that each notification was another sale on her Etsy store of the Foam Mate instructions.

Over the next couple days, the video kept getting views and they made a few thousand dollars from selling the Foam Mate instructions.

“It was insane. We just felt so blessed and amazed,” Melanie said.

The video was posted in October 2017. It has been viewed more than 785,000 times since then. Honey Do Carpenter has more than 72,000 subscribers and the Foam Mate has been sold in 50 different countries.

Not long after that first video went viral, Darwin began construction on an aircrete shed. Melanie filmed the whole process and posted the videos to YouTube. The shed was completed in short order and after two years is still standing strong, but Darwin has kept working with the Foam Mate and aircrete.

He’s built rocket stoves, forges, bricks for flower beds and even a dog house with aircrete.

Because aircrete is porous, it needs to be sealed. Darwin invented another device to help with that. He created the Stucco Mate that helps to quickly apply stucco to seal aircrete structures.

Darwin was able to quit his job delivering pizzas and is now self-employed. He builds Foam Mates and his other inventions by hand and sells them all over the world. He still maintains his YouTube channel and receives a small income from that.

“It is scary and exciting all at the same moment,” Melanie said.

Between YouTube and online sales, Darwin and Melanie are able to make a modest living, but that’s not the most important part about being self-employed for Darwin.

“What I found is the happiness level is just through the roof when you are self-employed and you’re your own boss and you’re actually making a living from something you create,” he said.