Covid-19 is a 'pandemic of historic proportions,' expert says, as cases climb in the South and Southwest 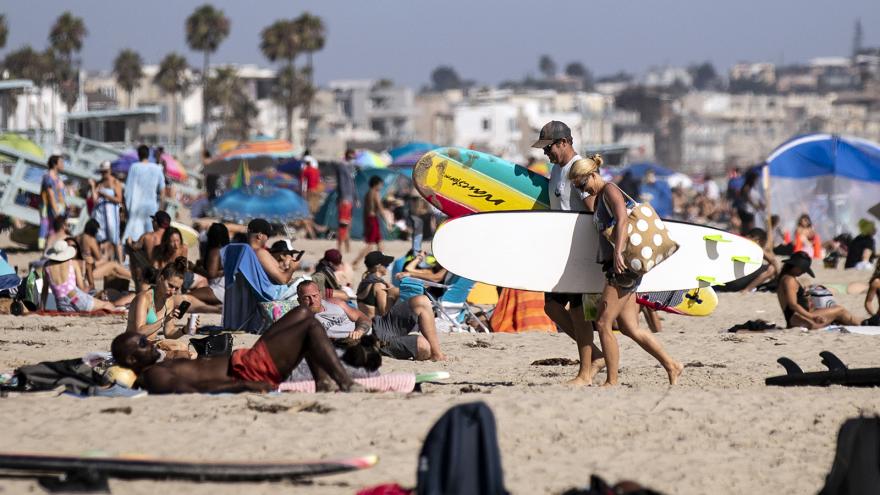 (CNN) -- With Covid-19 cases soaring in the US South and Southwest, the nation's public health experts fear the end is not yet in sight and wonder what normal will look like as the pandemic stretches on through the rest of the year.

"I think we can't deny that fact," he said during a Georgetown University Global Health Initiative webinar. Fauci compared the current crisis to the 1918 influenza pandemic that killed more than 50 million people globally and about 675,000 in the US. "That was the mother of all pandemics and truly historic. I hope we don't even approach that with this, but it does have the makings of, the possibility of ... approaching that in seriousness."

The United States saw a record number of new cases Tuesday with 67,417, according to data from Johns Hopkins University. As of Tuesday, more than 3.4 million people had been infected, and 38 states reported an increase in the number of new cases from the week before.

As new cases continue to emerge, at least 27 states have paused or rolled back plans to reopen their economies. Among them is Nevada, where 37 bars have filed a lawsuit to fight Gov. Steve Sisolak's order to revert back to Phase 1 of the state's reopening plan.

But Fauci cautioned that relaxed restrictions in California, Florida, Arizona and Texas are partly to blame for rising cases in those states, particularly among young people.

Addressing the climb in the number of cases overall and among young people, US Centers for Disease Control and Prevention Director Dr. Robert Redfield said Tuesday the nation is in a much better place than it was in the spring, because the mortality rate is lower, but said "we're not out of the woods for this."

"While we've made a lot of progress, we still have a ways to go in terms of getting this under control," Redfield said during a webinar with the Buck Institute.

Hopes for a successful vaccine

A major determinant in how long the US will have to live with a coronavirus pandemic, experts say, is how quickly researchers can produce a vaccine.

Without one, Redfield said, "we're going to have to go through two or three years of wrestling with this virus."

But Redfield also said he has "never seen the government move faster" and is hoping that the nation will have a successful vaccine by January.

Creation of the vaccine is not the end of the virus, however. It must then be distributed to enough people, along with survivors of the virus, to establish herd immunity.

Companies developing vaccines have said they will be able to make up to a billion doses, Fauci said Tuesday. He is hopeful those vaccines can be developed and distributed within the next year to a year and a half, he said.

"I'm feeling much better about getting a vaccine that's distributed not only within our country, but then to be able to have doses for people throughout the world, who cannot afford, nor are they in a situation where it's very easy for them to get vaccinated," Fauci said.

Before that happens thousands more Americans will die from the virus, an influential model says.

The model from the Institute for Health Metrics and Evaluation at the University of Washington is now projecting that 224,000 people will die from the virus by November 1, which is an increase of almost 16,000 from the week before.

Some of those states set coronavirus records Tuesday.

Texas reported a record high daily number of new cases Tuesday with more 10,745. Mississippi has its highest numbers of coronavirus hospitalizations by far since the first case was reported, Gov. Tate Reeves said. California also set records with 6,745 hospitalizations and 1,886 ICU admissions, according to data from the California Department of Public Health (CDPH).

The virus is so widespread that laboratories are getting more coronavirus samples than they can process, the American Clinical Laboratory Association said Tuesday.

As the numbers grow, officials continue to debate the best plan for the new school year.

In California, some of Orange County's largest school districts said they will not follow the county Board of Education's controversial recommendations to return students and teachers to the classroom this fall without the use of face masks or social distancing.

Many are still discussing their alternatives, but Anaheim and Santa Anita Unified School Districts said their school years will start with full distance learning.

"During these challenging times, the safety of our school community continues to be our top priority. While we hope at some point to have our students attend our schools alongside their classmates and teachers, now is not the time," said Santa Ana Unified School District Superintendent Jerry Almendarez.

President Donald Trump, who has threatened the funding of schools that do not return to campus in the fall, said Tuesday in an interview with CBS News that it would be a "terrible decision" for schools not to go back and that people are playing politics with the issue.