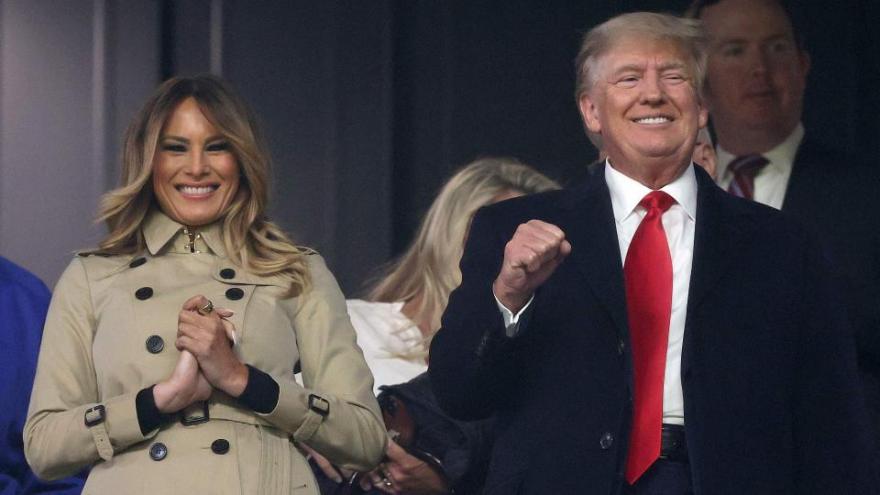 Former first lady and president of the United States Melania and Donald Trump look on prior to Game Four of the World Series on October 30, 2021 in Atlanta, Georgia.

(CNN) -- A Georgia district attorney investigating former President Donald Trump's efforts to overturn the 2020 election results in the state has requested a special grand jury to gather evidence and compel witnesses to testify in relation to her probe.

Fulton County District Attorney Fani Willis wrote that her office has "received information indicating a reasonable probability that the State of Georgia's administration of elections in 2020, including the State's election of President of the United States, was subject to possible criminal disruptions," according to a letter sent to Christopher Brasher, chief judge of Fulton County's Superior Court, and provided by the court.

Willis has asked for the grand jury to begin in May and remain in place for no longer than 12 months.

The request to seat a special grand jury -- nearly a year after she opened her investigation -- indicates Willis is still seriously pursuing possible criminal charges against Trump or his allies for their efforts to interfere in Georgia's election in 2020.

A Trump spokesperson did not respond to a request for comment.

"We have made efforts to interview multiple witnesses and gather evidence, and a significant number of witnesses and prospective witnesses have refused to cooperate with the investigation absent a subpoena requiring their testimony," Willis wrote in her letter to the court.

"By way of example, Georgia Secretary of State Brad Raffensperger, an essential witness to the investigation, has indicated that he will not participate in an interview or otherwise offer evidence until he is presented with a subpoena by my office," she wrote.

Willis kicked off her probe with letters to Raffensperger and other Georgia state officials asking them to preserve documents related to Trump's meddling in Georgia's election soon after a recording came to light of Trump asking Raffensperger to "find" enough votes to flip the state -- which Joe Biden won -- in Trump's favor.

The Georgia Secretary of State's office has already provided Willis's team with evidence including document, recording of calls Trump made to Raffensperger and another official in his office and interviews with some staffers.

Raffensperger and other state officials have not been accused of wrongdoing and are not expected to be targets of her investigation.

However, Willis has made clear that she is looking into the activities of a number of other Trump loyalists. She planned to examine actions by former Trump lawyer Rudy Giuliani, South Carolina Sen. Lindsey Graham and others who may have aided Trump's efforts.

Willis, who took office in January 2021, has juggled her Trump investigation with a mountain of backlogged cases and rising violence in the Atlanta area. Her investigation now threatens to run up against the 2022 midterm elections.

In a recent Associated Press interview, Willis said she expected to make a decision in the first half of 2022 about whether to bring charges against Trump or others in his orbit.

She will need approval from the majority of the county's superior court judges in order to seat a special grand jury. While the panel would prove useful for evidence gathering, special grand juries in the state are not able to issue indictments.

In her letter, Willis noted that a special grand jury can be seated for a longer term that normal grand juries and can focus solely on the Trump matter.