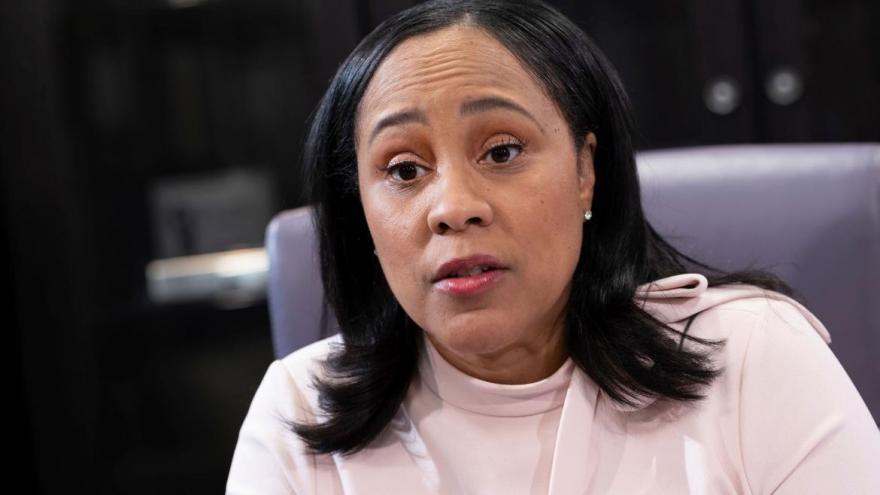 (CNN) -- The Fulton County, Georgia, district attorney is asking for the FBI's help in providing security for buildings and staff one day after former President Donald Trump called prosecutors investigating him "racists" and said his supporters should hold "the biggest protests we have ever had" in cities like Atlanta if the prosecutors "do anything wrong or illegal."

DA Fani Willis and her office are investigating Trump for his efforts to overturn the 2020 presidential election results in Georgia. A special grand jury will be seated as part of that investigation on May 2.

At a rally in Conroe, Texas, Saturday night, Trump, without naming them, railed against Willis plus New York Attorney General Letitia James and Manhattan District Attorney Alvin Bragg Jr., who are investigating his business empire, calling them "racists." The three are Black. Trump provided no evidence of racial discrimination.

"These prosecutors are vicious, horrible people. They're racists and they're very sick -- they're mentally sick," he said. "They're going after me without any protection of my rights from the Supreme Court or most other courts. In reality, they're not after me, they're after you."

In a letter to J.C. Hacker, FBI special agent in charge of the Atlanta field office, Willis asked for a risk assessment of buildings surrounding her office and the courthouse where the grand jury will sit. She also asked for FBI agents to provide security, saying "security concerns were escalated this weekend" by Trump's rhetoric. Willis said her office had already received communications from people unhappy with the investigation before Trump's rally.

"I am asking that you immediately conduct a risk assessment of the Fulton County Courthouse and Government Center, and that you provide protective resources to include intelligence and federal agents," Willis said in the letter, obtained by CNN. "It is imperative that these resources are in place well in advance of the convening of the Special Purpose Grand Jury."

CNN has reached out to the FBI in Atlanta for comment.

Willis, a Democrat, compared potential violence associated with her investigation to the January 6, 2021 attack on the US Capitol. Trump said Saturday night that he would consider pardoning those who were charged in connection with the deadly attack if he wins the White House again. Several high-profile Republicans, including New Hampshire Gov. Chris Sununu, Sen. Lindsey Graham of South Carolina and Sen. Susan Collins of Maine, quickly dismissed Trump's suggestion.

"We must work together to keep the public safe and ensure that we do not have a tragedy in Atlanta similar to what happened at the United States Capitol on January 6, 2021," Willis said.