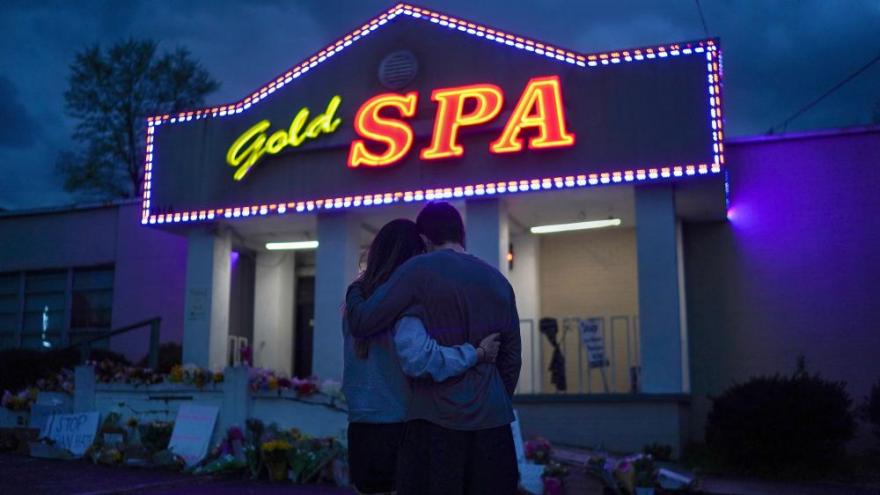 Robert Aaron Long, the suspect in the shootings that left eight people dead at three Atlanta-area Asian spas, has been indicted on murder charges, with prosecutors seeking the death penalty for hate crimes targeting the sex and race of the victims. Cynthia Shi and her boyfriend, Graham Bloomsmith, are shown embracing outside Gold Spa near Acworth, Ga., on Thursday, March 18, 2021.

(CNN) -- Robert Aaron Long, the suspect in the shootings that left eight people dead at three Atlanta-area Asian spas, has been indicted on murder charges, with prosecutors seeking the death penalty for hate crimes targeting the sex and race of the victims.

Fulton County District Attorney Fani Willis filed notice with the Fulton Superior Court Tuesday that she plans to seek the death penalty and enhanced hate crimes charges against Long in the first test of a hate crime law passed by the Georgia Legislature last year.

"I, along with my staff, have made a determination that this office will seek the death penalty," Willis told reporters. "Last year, I told the voters of Fulton County that I could not imagine a circumstance where I would seek it. And at that time I did not."

"Unfortunately, a case has arisen in the first few months of my term that I believe warrants the ultimate penalty," she added. Further, we have filed a notice that we will seek sentence enhancement, pursuant to Georgia's sentencing enhancement statute, commonly referred to as a hate crime statute, based on the race and gender of the victims."

Willis said this is the law's first application in Fulton County and, she believes, in the state.

Some public officials had early on raised concerns that ethnicity had come into play in the shootings, particularly given a nationwide spike in anti-Asian violence during the coronavirus pandemic.

Long, 21, of Woodstock, Georgia, is suspected of opening fire at the spas on the afternoon and early evening of March 16, first at a business about 30 miles northwest of Atlanta, followed by two more at spas in northeastern Atlanta.

Peter Skandalakis, director of the Prosecuting Attorneys' Council of Georgia, said the enhanced hate crime penalty for homicide in the state is either maximum of life in prison with possibility of parole at 30 years, life without parole, or the death penalty.

Skandalakis said he wasn't aware of the law being used over the last year. His agency's mission is to provide support to prosecutors.

It will be up to a separate grand jury in Cherokee County to decide on charges for others killed in the shooting in Acworth, Georgia, that left four killed and one person wounded.

Authorities in Cherokee County previously said that Long told investigators that the shootings were not racially motivated and told them he has a "sexual addiction."

Long's appointed attorney could not immediately be reached for comment.

Long was arrested the night of the shootings about 150 miles south of Atlanta, in a traffic stop on Interstate 75, authorities said.

Sheriff Frank Reynolds of Cherokee County, where the Acworth shootings took place, told reporters Long indicated "he has some issues -- potentially sexual addiction -- and may have frequented some of these places in the past."

A law enforcement source told CNN shortly after the shootings that the suspect was recently kicked out of the house by his family due to his sexual addiction, which, the source said, included frequently spending hours on end watching pornography online.

Shortly before 5 p.m. on March 16, deputies were called to Young's Asian Massage between the Georgia cities of Woodstock and Acworth after reports of a shooting, Cherokee County sheriff's officials said.

That shooting left four people dead -- two Asian, and two White -- and one person injured, Baker said. Two of the victims were pronounced dead at the scene, while the other two died at a hospital.

Long's family saw the images, contacted authorities and helped identify him. He is being held without bond in Fulton County.

Georgia had been one of four states without a hate crime law.