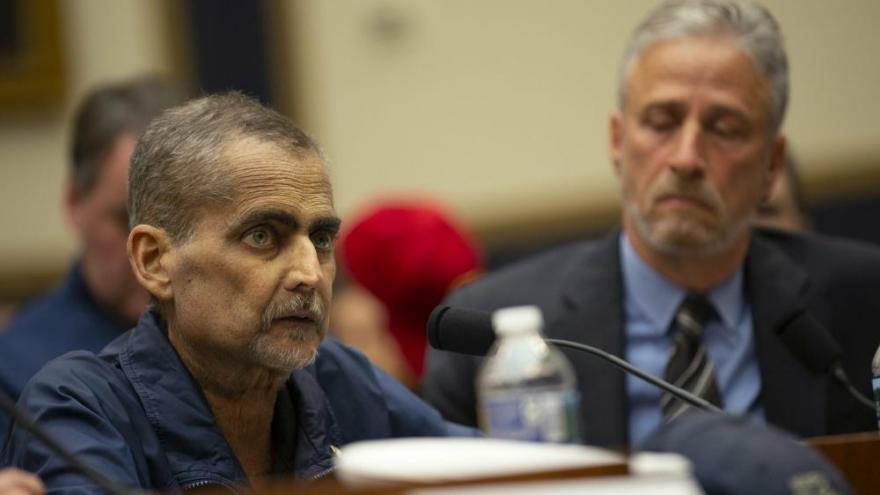 A funeral for first responder Luis Alvarez will be held Wednesday, just days after his powerful congressional testimony on compensating individuals with health problems related to the 9/11 terrorist attacks.

(CNN) -- A funeral for first responder Luis Alvarez was held Wednesday, just weeks after his powerful congressional testimony on compensating individuals with health problems related to the 9/11 terrorist attacks.

Alvarez, 53, died Saturday from complications of cancer linked to the time he spent with other first responders at ground zero.

His younger sister, Aida Lugo, recalled her Havana-born brother protectively standing guard over her stroller. "Don't touch my baby," Alvarez would say when he was just 3 years old.

"Little did my parents know that this single act of sacrifice would lay the groundwork for the man their son would become -- a man who served, defended, protected until his last dying day," she said of her parents leaving Cuba for the United States.

At 18, Alvarez told his parents, "without warning," that he was enrolling in the US Marine Corps, Lugo recalled at the packed Immaculate Conception Church in Queens. He later became a member of the New York Police Department, serving as a uniformed officer in Long Island City, Queens, as a narcotics officer and as a member of the elite bomb squad.

"He was about to discover the largest group of people who followed the same beat -- his same cadence," she said of the NYPD.

"No person who responded to 9/11 or who worked to the point of exhaustion during the lengthy rescue and recovery that followed should ever need to beg our elected officials to act," O'Neill said.

"But I'll tell you this, we can thank God it was Lou Alvarez who stepped forward to make that demand ... It is in Lou's memory that we must strenuously urge all our representatives that the United States of America cannot in good conscience place a financial cap on this slow moving crisis.

Following the news of his death, several lawmakers have called on Congress to permanently allocate money to a fund that compensates survivors and responders affected by the 2001 attacks.

"Detective Alvarez lost his fight against cancer, but his fight for 9/11 responders and survivors continues. He dedicated his life to protecting others and advocating on behalf of those ailing after the attacks," said US Rep. Jerry Nadler, D-New York.

A retired NYPD bomb squad detective, Alvarez testified in Washington last month about his 9/11-related medical issues and appealed for Congress to replenish the September 11th Victim Compensation Fund -- expected to expire by 2020.

Some lawmakers did not show up for the House Judiciary subcommittee hearing on the matter, sparking a fiery speech from comedian and fund proponent Jon Stewart, who attended Wednesday's funeral.

A group of 9/11 first responders met with Senate Majority Leader Mitch McConnell this month to push for the passage of a measure to extend compensation funding. Participants said McConnell committed to holding a vote.

One of the responders said he gave Alvarez's police badge to McConnell during the meeting.

The fund Alvarez and other responders fought for was created months after the 2001 terrorist attacks. Congress and President Barack Obama agreed in 2010 to pay medical costs for first responders who have since been diagnosed with illnesses and cancers related to breathing in the air at ground zero.

Congress and Obama also reopened the fund and set aside $2.7 billion to pay victims. In 2012, the government determined that cancers can be compensated as part of the fund.

It wasn't nearly enough money, however, and in 2015 Congress added $4.6 billion in funding, along with new controls and limits on some payments. The special master who administers the fund anticipates that total payouts for claims filed before the measure expires in 2020 could be far higher: $11.6 billion, if a current uptick in claims -- largely caused by an increase in serious illnesses and deaths -- continues.

The current proposal to permanently extend the fund would authorize it through 2089. It has plenty of support in the House, where it passed the Judiciary Committee, and McConnell indicated that Congress would address the fund.