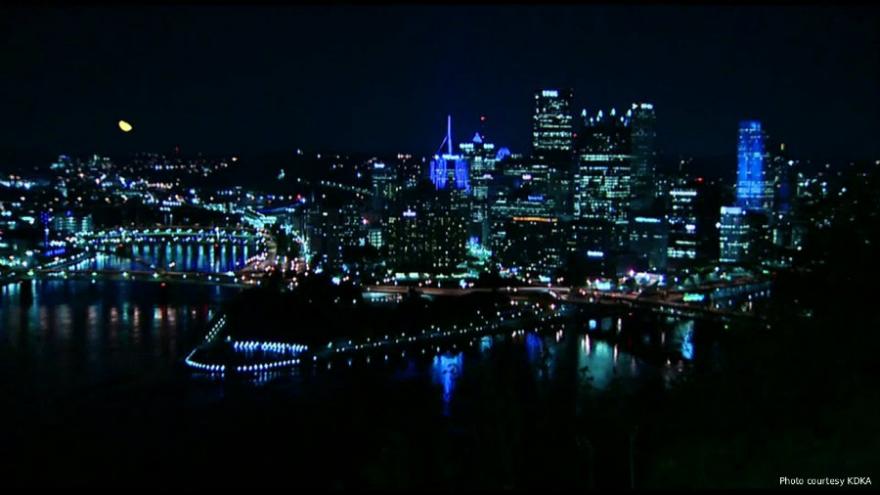 (CNN) -- A Pittsburgh community shaken by a brazen rampage in a synagogue continues its grieving Tuesday with funerals for three victims of what's believed to be the deadliest attack against Jews in US history.

Mourners, including members of the NFL's Pittsburgh Steelers, lined up late in the morning outside Rodef Shalom temple for a visitation and funeral for brothers Cecil and David Rosenthal, who were among the 11 worshippers killed Saturday when a gunman stormed the Tree of Life synagogue in the close-knit community of Squirrel Hill.

A long line also formed outside Pittsburgh's Jewish Community Center ahead of the funeral late Tuesday morning for Dr. Jerry Rabinowitz. Mourners have been remembering him for his skill in medicine and his compassionate care.

"He's so big. I mean, he's a little guy, and he's bigger than life," Jean Clickner told CNN's Anderson Cooper. "Everyone knows him (in this city). Everyone's been touched by him.

"Anything you wanted done, Jerry was there to do it. (He) always helped out."

Clickner said she had seen his spiritual growth over two decades.

"He wanted to learn," she said.

The services came hours before a visit from President Donald Trump, who will travel Tuesday afternoon to Pittsburgh, despite a request from the city's mayor to hold off on the trip.

Eleven people died and six were injured when a gunman opened fire in the synagogue as three congregations gathered to celebrate Shabbat services. Robert Bowers, whom authorities believe acted alone, faces 29 federal charges, some of which are punishable by death.

The shooting has struck at the heart of Pittsburgh's historically Jewish Squirrel Hill neighborhood and reverberated across the nation as people have banded together to comfort one another and stare down hatred.

"Tomorrow, we begin the funerals for our 11 neighbors who were stolen from us. Tomorrow, we continue to mourn their loss," Pittsburgh Mayor Bill Peduto tweeted Monday night. "We continue to help their families & those that were wounded. We reach out to our Jewish community to share love, compassion & empathy."

Blue light washed over Pittsburgh on Monday night, as buildings lit up in tribute to those who were killed.

The Pennsylvania State Capitol, in Harrisburg, also was bathed Monday night in a single blue light, as the governor attended a vigil.

"All of Pennsylvania stands with the victims and their families," Gov. Tom Wolf tweeted. "We join the Pittsburgh Jewish community and Jewish Americans across our nation in mourning."

Online, mourners have rallied behind the hashtag #strongerthanhate.

Rabbi Jeffrey Myers, who was leading the service at the Tree of Life when bullets began to fly, said his congregants would be unbowed.

"We are Tree of Life and, as I said before to many, you can cut off some of the branches from our tree, but Tree of Life has been in Pittsburgh for 154 years. We're not going anywhere," he said Monday on CNN's "New Day." "We will be back stronger and better than ever."

President Trump is expected to visit Pittsburgh on Tuesday afternoon, along with first lady Melania Trump, as well as daughter Ivanka Trump and son-in-law Jared Kushner. But the trip has been criticized in some circles -- and a number of local and national officials have declined to appear with him.

The White House has declined to say who the President will meet with when he travels to Pittsburgh on Tuesday afternoon. One official described the visit as "understated."

The visit will include a stop at the University of Pittsburgh Medical Center, which treated some of the shooting victims, UPMC spokesman Paul Wood said.

Trump wants to travel to Pittsburgh to show support in the aftermath of the shooting, White House press secretary Sarah Sanders said.

But Jewish activists in Pittsburgh told the President in an open letter that his words and policies over the past three years "have emboldened a growing white nationalist movement," and that he is not welcome until he "fully (denounces) white nationalism."

Peduto, the mayor, and Allegheny County Executive Rich Fitzgerald, both Democrats, have indicated they will not meet with the Republican President during his visit.

Peduto told CNN's Anderson Cooper on Monday that he would rather Trump visit after the victims' funerals.

Asked Tuesday whether Peduto would appear with Trump, spokesman Tim McNulty said: "No. His (Peduto's) focus is on the families."

Fitzgerald said that although he wouldn't meet Tuesday with Trump, "if the President wishes to come next week, or the next, that's something we can look at."

Pennsylvania's two US senators also were not planning to join Trump in Pittsburgh. Sen. Pat Toomey, a Republican, was invited to join the President but declined, according to a spokesman, citing previous commitments in another part of the state. Democratic Sen. Bob Casey was not invited by the White House, according to his communications director. Casey will attend a vigil for the victims in southeastern Pennsylvania.

Senate Majority Leader Mitch McConnell, House Speaker Paul Ryan, Senate Minority Leader Chuck Schumer, and House Minority Leader Nancy Pelosi were all invited to join the President but were not planning to take part in the visit, according to two congressional sources. Through their offices, McConnell and Ryan both cited scheduling conflicts.

Former Tree of Life Rabbi Chuck Diamond told CNN's Don Lemon he would rather have the President visit later.

"I would just ask the President please, please, if it's not too late, put it off a week," Diamond said. "Any president that would come in, any president would be a distraction.

"And President Trump, he's so divisive and there's such strong feelings on all sides, it will be a distraction," he said. "And that upsets me the most because the focus has to be on the victims and has to be on comforting the family and also the city. The city needs time to grieve."

Myers, the rabbi at Tree of Life, said Monday that "the President of the United States is always welcome."

"I'm a citizen. He's my president. He is certainly welcome," he said, when asked if he wanted Trump to come to Pittsburgh.

On Tuesday, Myers said his words prompted a swift backlash, including emails that "contain hate."

Support for those directly impacted has swelled in the massacre's wake. An online fundraiser for the synagogue had raised $825,000 toward its $1 million goal by Tuesday morning.

Sports fans will share a moment of silence for the victims Tuesday when the Pittsburgh Penguins take on the New York Islanders at the PPG Paints Arena. The hockey team will also wear "Stronger Than Hate" patches on their uniforms and hold a collection at the game to benefit victims and victims' families.

Outreach efforts also have extended to first responders. Those injured in the shooting include police officers, two of whom remain hospitalized.

The walls of the Zone 4 police station, a few blocks from the Tree of Life synagogue, were covered in handwritten notes from residents after the shooting, the Pittsburgh Public Safety Department said Monday in a series of Twitter posts. People also came by to "deliver food and hugs for the officers," the department said.

More than 500 people from different faiths, races, backgrounds and communities gathered to memorialize the victims Monday at the Westmoreland County Courthouse in Greensburg, about 30 miles southeast of Pittsburgh, CNN affiliate KDKA reported.

Everyone must "work together to make our differences, our strengths and promote love, dignity and respect," Carlotta Paige, co-chair of the Westmoreland County Diversity Coalition, told the crowd.

Bowers, the suspected gunman, made his first court appearance Monday. 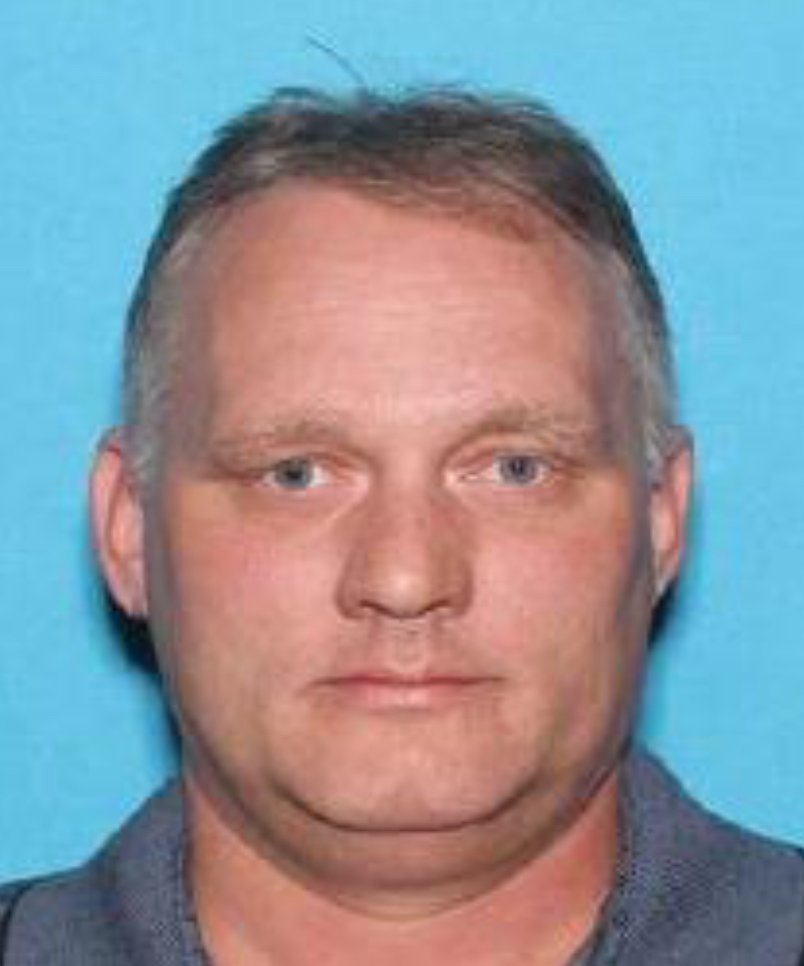 He faces at least 29 federal charges, including 11 counts of obstruction of exercise of religious beliefs resulting in death, plus 11 counts of using a firearm to commit murder. A conviction on any could be punishable by death, US Attorney Scott Brady of the Western District of Pennsylvania said.

Brady has initiated the process to seek the death penalty, though Attorney General Jeff Sessions must ultimately give the OK to pursue it, the Justice Department said.

Bowers was detained without bond. His next court date is Thursday.

Sessions in an address Monday in Boston labeled the assault a "murderous rampage."

"This was not just an attack on the Jewish faith," he said. "It was attack on all people of faith, and it was an attack on America's values of protecting those of faith. It cannot, it will not, be tolerated."

Weeks before the shooting, Bowers posted anti-Semitic slurs, complained that Trump was surrounded by too many Jewish people and blamed Jews for helping migrant caravans in Central America on the social media platform known as Gab.

Police said Bowers used a Colt AR-15 rifle and three Glock .357 handguns during the attack. He legally purchased the three Glock .357s, a law enforcement official familiar with the investigation told CNN. It's not clear whether the AR-15 was purchased legally.

Hours before the shooting, Bowers posted about Trump. Minutes before allegedly storming inside the building, he logged onto Gab again and wrote to his followers.

"I can't sit by and watch my people get slaughtered," he wrote. "Screw your optics, I'm going in."