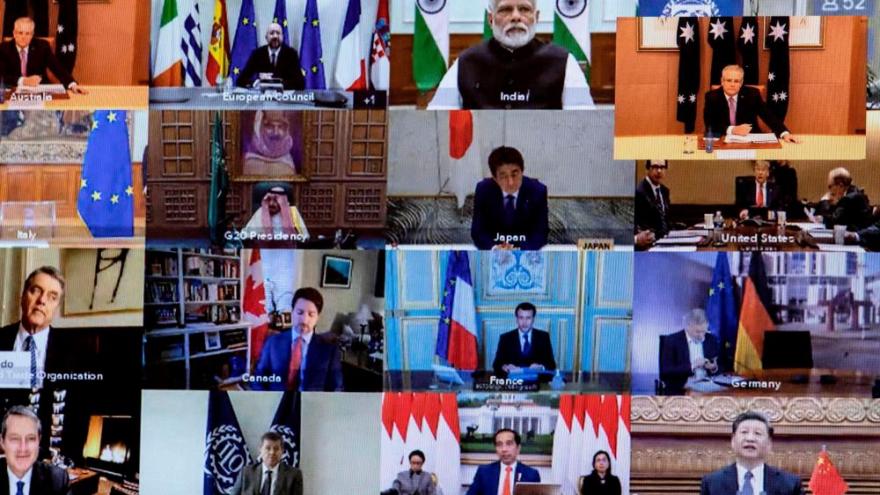 The leaders of the world's foremost industrialized nations convened Thursday to discuss the global coronavirus outbreak.

(CNN) -- The leaders of the world's foremost industrialized nations convened Thursday to discuss the global coronavirus outbreak as data emerged showing the largest of those economies -- the United States -- is suffering massive job losses due to the pandemic.

Like most of their citizens have been doing in the era of self-isolation, the G20 leaders met over video. Photos from the session showed leaders all beaming into the session from their offices or homes.

President Donald Trump participated from the White House Situation Room, with his presidential seal in the background. Other leaders, including Chinese President Xi Jinping, appeared from their offices.

Canadian Prime Minister Justin Trudeau, who is self-quarantining after his wife tested positive for coronavirus, appeared from home.

The detached summit -- which disallowed the small pull-asides, private huddles and quiet whispers that usually color the yearly G20 gathering -- only illustrated the uncertain and unusual times over which the leaders are presiding.

And it seemed to capture the lingering questions about whether a geopolitically fractured world will be able to confront a virus that disregards borders and the governments that enforce them.

Opening the meeting, the aging Saudi King Salman -- this year's G20 president -- said the "human crisis requires a global response. The world counts on us to come together and cooperate in order to face this challenge."

Trump tweeted that he'd be discussing the call during a 5 p.m. ET news conference from the White House. The call was underway when data was released from the federal government showing jobless claims soaring to a seasonally adjusted 3.28 million in the week ending March 21 -- the most in recorded history.

World leaders are gripping for more economic turmoil as the coronavirus pandemic gains speed, including the possibility of a global recession.

In a joint statement released after the call, the G20 countries said they were committed to doing whatever it takes to overcome the pandemic and would spare no effort to protect lives, safeguard people's jobs and preserve financial stability.

The statement did not outline any new or specific measures the G20 was taking, but said leaders were ready "to react promptly and take any further action that may be required."

The joint statement aside, there are lingering global disputes that could prevent the collective from effective coordination to combat the virus. The two largest economies in the group, the US and China, have been locked in a blame game on the origins of the crisis.

On Wednesday, the US State Department pushed to include the phrase "Wuhan virus" in a joint statement with other Group of Seven members following a meeting of foreign ministers. The overtures were rejected by other members, resulting in separate statements and division in the group.