GameStop names a new CEO and CFO, both from Amazon 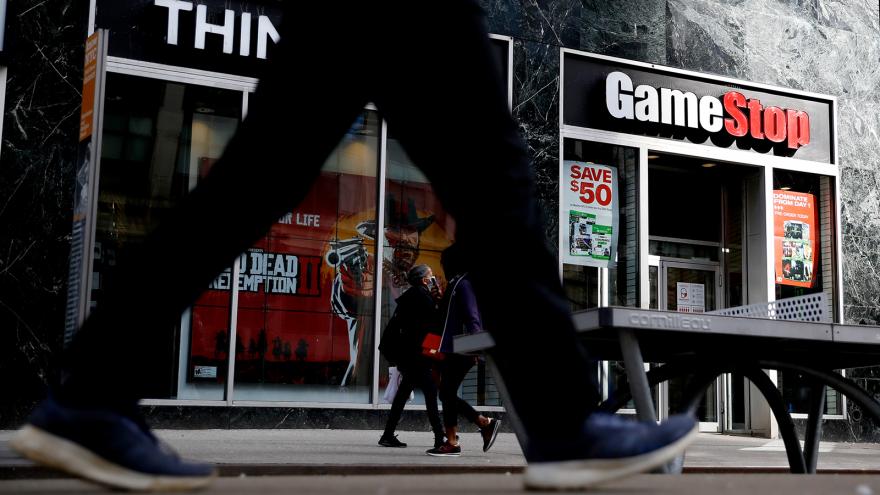 GameStop is getting a new chief executive and chief financial officer, the company announced as part of its earnings release on June 9. - John Smith/VIEWpress/Corbis/Getty Images

(CNN) -- GameStop is getting a new chief executive and chief financial officer, the company announced as part of its earnings release Wednesday.

Matt Furlong, who will replace George Sherman as CEO, and Mike Recupero, who will be CFO, are both joining the company from Amazon. Their experience at the online retail giant will likely prove useful as GameStop continues its efforts to transition from a struggling brick-and-mortar video game retailer into an e-commerce powerhouse.

In recent months, GameStop — which has been a darling of internet retail stock traders this year — has undergone a major executive shakeup at the direction of Ryan Cohen, the billionaire Chewy.com founder who invested heavily in GameStop last year and joined its board in January.

On Wednesday, Cohen was confirmed as chairman of GameStop's board during the company's annual shareholder meeting.

The company also recently added its first-ever chief technology officer, a new chief operating officer, a new senior vice president of e-commerce and several other executive roles — many of whom come from Amazon and Cohen's Chewy.

"The Company is continuing to actively pursue senior talent with gaming, retail and technology experience," the company said in a press release Wednesday.

In addition to the major leadership announcement, GameStop posted mixed earnings results for the three months ended May 1.

Quarterly revenue increased 25% year-over-year to nearly $1.28 billion, beating the $1.16 billion Wall Street analysts had projected. But the company posted a steeper-than-expected net loss of $66.8 million, or $1.01 per diluted share.

GameStop in April sold more than $550 million in stock, and on Wednesday, the company said it intends to file with the Securities and Exchange Commission for the option to sell up to 5 million more shares, though it's unclear if the company will exercise that option.

The stock drop may be a reaction not only to the earnings report, but also to the company's shareholder meeting Wednesday. During the event, Cohen spoke but declined to share details about his turnaround strategy for the company, according to multiple reports from the Wall Street Journal and others citing meeting attendees.

The company then held a quarterly earnings call that lasted around 10 minutes, during which outgoing CEO George Sherman reviewed the company's financial results from the quarter and did not take questions from analysts. The company also declined to provide annual sales and earnings guidance, although Sherman said during the call that the company's May sales were up nearly 27% year-over-year.

GameStop also revealed on Wednesday that it received a request from SEC staff last month to provide documents and information for an investigation into the trading of its and other companies' stocks.

"We are in the process of reviewing the request and producing the requested documents and intend to cooperate fully with the SEC Staff regarding this matter," the company said in its quarterly filing with the SEC. "This inquiry is not expected to adversely impact us."

Despite the love it's gotten from Redditors this year, GameStop still has a long way to go to turn its fortunes around. It is still losing millions, has closed hundreds of stores over the past year and is struggling to keep up with consumers' preference for downloading games from the internet rather than buying them in-stores.

Its new leadership could help.

Incoming CEO Furlong most recently worked as a "country leader" overseeing Amazon's Australia business, and he previously served as a technical adviser to the head of Amazon's North America consumer business, according to GameStop. In a press release, GameStop called him a "veteran e-commerce leader with significant experience implementing growth strategies across global geographies and product categories." He is set to start at GameStop on June 21.

"[Furlong] is a proven e-commerce leader with a firm understanding of how to delight customers," Sherman said during the earnings call. "His focus, intensity and work ethic will set the right tone atop the company as we begin shifting to a growth phase."

Recupero, the new CFO, is a 17-year Amazon veteran who has served as CFO of the North American consumer business and Prime Video. He will start at GameStop on July 12.