GameStop says it's an essential business 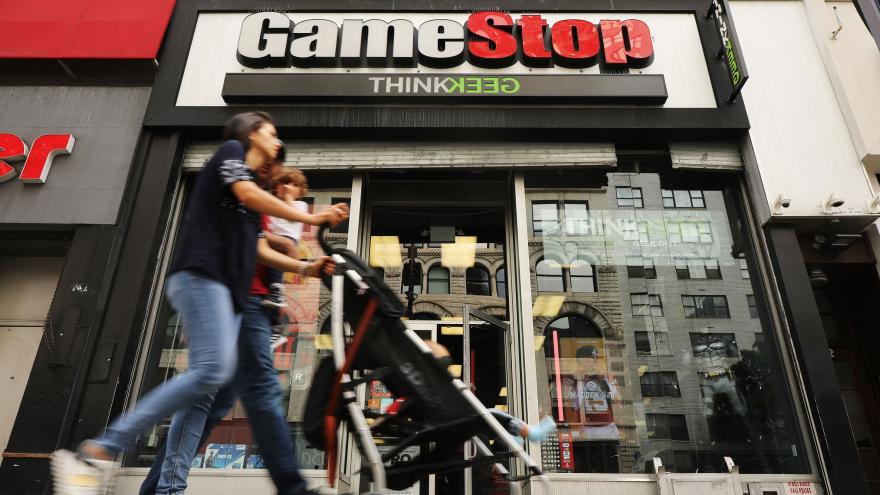 (CNN) -- Hundreds of GameStop stores around the United States remain open, despite the intensifying coronavirus outbreak and demands from irate employees to close the stores.

GameStop locations are still open in several states that have ordered non-essential retail to close, including New York and New Jersey. Starting Friday, the video game retailer began to close stores in California and Pennsylvania. California has been under a statewide shelter-in-place order since Thursday evening.

The company argues it is "essential" because it offers mice and keyboards that could help people work from home. GameStop told CNN Business in a statement that "we are one of many providers of these products that are remaining open at this time." But it didn't comment on why it must remain open if other stores are also providing those items.

Eight current employees told CNN Business that GameStop is keeping its stores open to profit off of a video game shopping spree during a global pandemic. Video game sales have risen for retailers and online stores, as analysts anticipate more people are playing as they stay home. PC game store Steam reported an all-time high of 21 million users on Friday.

"Animal Crossing: New Horizons" launched in stores Friday and "Doom Eternal" was available a day earlier. Ahead of those two major video game releases, GameStop sent out an internal memo Thursday to store leaders and other employees saying that it believed its stores should be "classified as an essential business" and remain open during the global pandemic. It told employees in a letter viewed by CNN Business that they should direct law enforcement to call a corporate number if they tried to enforce store closures.

Several current employees told CNN Business that only select shops carry the kind of equipment that can help people work from home. GameStop primarily carries higher-end PC gaming accessories, not the more affordable and simpler tools that are most suitable for office work.

"That's absolutely ridiculous. If someone's trying to work from home, they don't want the $85 Razer keyboard we have or the $60 Razer mouse. Some cheap $20 Microsoft something is going to get them by just fine," said Dustin Carson, 31, a game adviser at a GameStop in Athens, Georgia. "They can get that at Walmart. They can get that at any of these other stores that also have groceries and are arguably much more essential to being open right now."

The Athens store opened on Friday morning, even though the county is under a shelter-in-place order.

Police went to the store Friday afternoon to order that it shut down. They showed GameStop employees an 11-page ordinance that included a list of essential businesses, which CNN Business viewed. GameStop was not listed as one of them. The store closed on Friday at around 4 pm ET and it is unclear if it will reopen Saturday. Athens' police department did not return a request for comment.

"Honestly, I'm relieved," said Carson, "No one needs to get sick or die over video games. They're not essential items."

As states and districts adopt new rules to counter COVID-19, GameStop said it would shift its approach: "We are complying with all state, county, city and local ordinances and we will continue to adjust to any future developments."

GameStop is struggling financially, going through considerable layoffs and closing stores. The pandemic could hurt the company because the bulk of its profit comes selling physical copies of the games.

"I never considered myself someone essential to a pandemic then, and I don't now," a GameStop shift manager in Illinois, who asked to remain anonymous for fear of retribution, told CNN Business.

The Illinois employee said their store made $4,000 in net sales on Sunday and Monday combined and "that is definitely out of the norm for this time of the year."

"I think I've cried every day since Monday... I'm trying not to cry in front of my staff," said a longtime current GameStop store leader in New Jersey, who didn't want to be identified for fear of being fired. "I feel very much like a pawn. It doesn't matter what the staff on the ground does. They're just expendable."

Employees are calling for GameStop to shut its stores, even though it will hurt them financially.

One assistant store leader in California said "I had asked my manager if we should call local law enforcement to try to enforce the closure... [the request] died in the chain of command." He later added that his store has now closed as of Friday and that he does not expect to be paid beyond using up his vacation days.

Matthew, who asked to be identified by first name only, a longtime GameStop employee, worked in a New Jersey mall store he said recently closed because the governor mandated mall closures.

While most employees expressed they believe GameStop should close its stores during the pandemic, one keyholder in Virginia said, "I do believe that they should stay open. With unemployment buckling under the weight of the layoffs I can't see a way to earn income at this moment in time... I need this job."