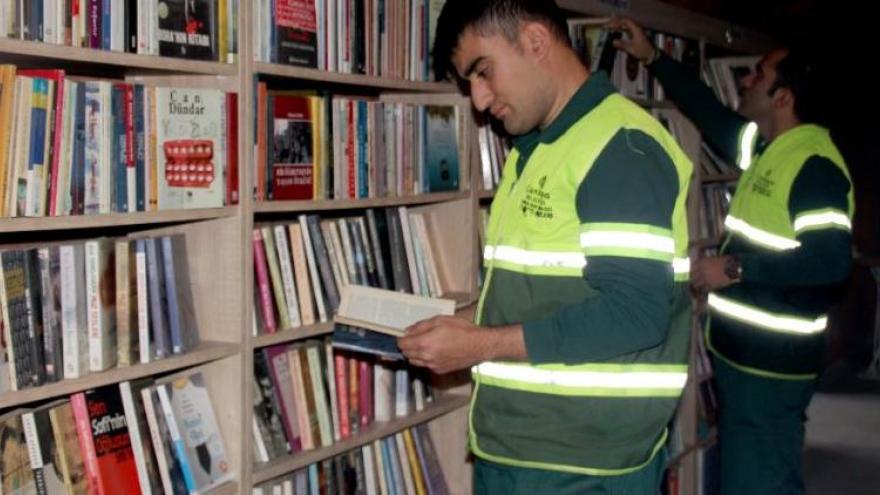 (CNN) -- A library in Ankara gives new meaning to the notion that books are timeless.

Garbage collectors in the Turkish capital have opened a public library comprised entirely of books once destined for the landfills.

The library, located in the Çankaya district of Ankara, was founded after sanitation workers started collecting discarded books.

Initially, the books were only for employees and their families to borrow. But as the collection grew and interest spread throughout the community, the library was eventually opened to the public in September of last year.

"We started to discuss the idea of creating a library from these books. And when everyone supported it, this project happened," said Çankaya Mayor Alper Tasdelen, whose local government oversaw the opening of the library.

Today, the library has over 6,000 books ranging from literature to nonfiction. There is also a popular kid's section with comic books and an entire section for scientific research. Books in English and French are also available for bilingual visitors.

The library is housed in a previously vacant brick factory at the sanitation department headquarters. With an aged brick façade and long corridors, the space was ideal for a library.

Books are loaned out on a two-week basis, which can be extended if needed, according to state media.

"On one hand, there were those who were leaving these books on the streets. On the other hand others were looking for these books," Tasdelen said.

The collection grew so large the library now loans the salvaged books to schools, educational programs, and even prisons.

"Village schoolteachers from all over Turkey are requesting books," Tasdelen said. The city government also hired a full-time employee to manage the library.

The library is often filled with children of municipal employees and students from nearby schools. There is also a lounge area for readers and chess boards for visitors. The library is especially popular with cyclists who bike in the nearby valley and break for a quick read and cup of tea.

"Before, I wished that I had a library in my house. Now we have a library here," Serhat Baytemur, a 32-year-old garbage collector, told state media.