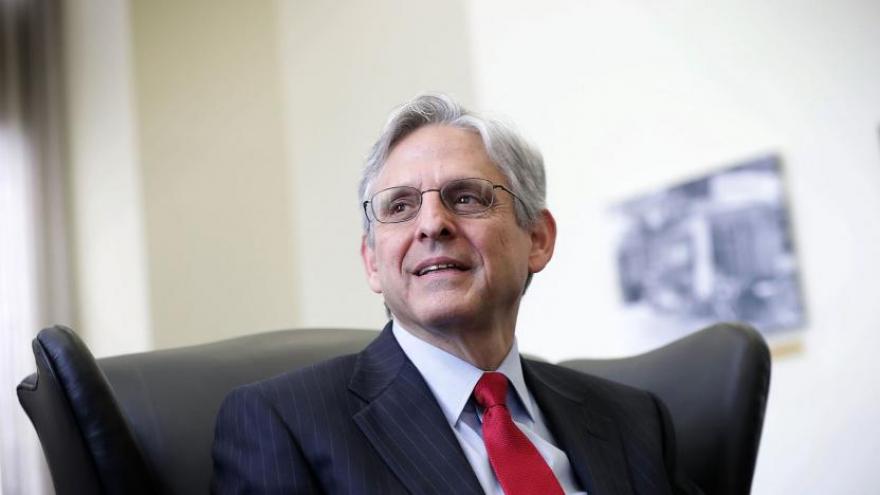 Merrick Garland gets another chance to go before the Senate Judiciary Committee at 9:30 a.m. ET on Monday, the first day of a two-day hearing, but this time he's appearing for a different role as President Joe Biden's nominee to lead the Justice Department.

(CNN) -- Merrick Garland, President Joe Biden's attorney general nominee, vowed Monday to prosecute the "heinous" crimes committed in the attack on the US Capitol and to redouble the Justice Department's efforts to provide equal justice amid heated policy debates over race and the criminal justice system.

Garland is testifying before the Senate Judiciary Committee on Monday, the first day of a two-day hearing where he's expected to face pointed questions from senators about politically charged investigations and the prosecution of the January 6 riot.

Garland, who led the Justice Department investigation into the 1995 Oklahoma City bombing, said that the current threat from White supremacists now is a "more dangerous period than we faced at that time," vowing to make his first priority to ensure investigators have all the resources they need to investigate the January 6 attack on the Capitol.

"If confirmed, I will supervise the prosecution of White supremacists and others who stormed the Capitol on January 6 -- a heinous attack that sought to disrupt a cornerstone of our democracy: the peaceful transfer of power to a newly elected government," Garland said in his opening statement.

Garland also distanced himself from the Trump administration's child separation immigration policy, calling it "shameful" and committing to aiding a Senate investigation into the matter.

"I think that the policy was shameful. I can't imagine anything worse than tearing parents from their children, and we will provide all of the cooperation that we possibility can," Garland told Senate Judiciary Chairman Dick Durbin.

The attorney general nominee also stressed that the Justice Department's role is meant to "serve the Rule of Law and to ensure equal justice under the law," noting that last year was the 150th anniversary of the Justice Department's founding in the aftermath of the Civil War, and that its core mission was to secure the civil rights promised by the 13th, 14th and 15th Amendments.

"The mission remains urgent because we do not yet have equal justice," Garland said. "Communities of color and other minorities still face discrimination in housing, education, employment, and the criminal justice system."

Garland is testifying Monday before the Judiciary Committee five years after he became the poster child for the Republican blockade of an open Supreme Court seat in the final year of President Barack Obama's term when Senate Republicans denied even a hearing Garland as Obama's Supreme Court nominee.

After Trump won the White House in 2016 and selected a new Supreme Court nominee, Neil Gorsuch, Garland returned to his position as the chief judge of the US Court of Appeals for the DC Circuit. While he stepped down from that position a year ago, he remains on the appellate court and has served on the federal bench for more than two decades.

He'll be leaving that appointment to take over a department often at the center of the political crises of the Trump administration.

While Garland faced pointed questions over multiple thorny issues awaiting him at the Justice Department, his selection has been praised by both Democrats and Republicans leading up to the hearing.

Sen. Chuck Grassley, the panel's top Republican, used his opening statement to defend the 2016 decision he made as the committee's chairman not to hold a hearing for Garland.

"I took a position on hearings and I stuck to it, and that's it," Grassley said. "I admire Judge Garland's public service."

In his opening statement, Durbin slammed the Justice Department under former Attorney General William Barr and former President Donald Trump, accusing the DOJ of becoming an arm of the Trump White House.

"The public's faith in the Department of Justice has been shaken -- the result of four years of Departmental leadership consumed with advancing the personal and political interests of one man -- Donald Trump," Durbin said. "Judge Garland, we are confident that you can rebuild the Department's once hallowed halls. That you can restore the faith of the American people in the rule of law. And that you can deliver equal justice for all."

Garland is likely to face questions from Democrats and Republicans alike on how he plans to navigate the political investigations in the Department -- both involving Trump as well as Biden's son, Hunter Biden.

Grassley asked Garland whether he had spoken to Biden about his son's case, where federal investigators in Delaware have been examining multiple financial issues involving the younger Biden, including whether he violated tax and money laundering laws in business dealings in foreign countries, principally China, two people briefed on the probe told CNN in December.

"I have not," Garland responded. "The President made abundantly clear in every public statement before and after my nomination that decisions about investigations and prosecutions will be left to the justice department. That was the reason that I was willing to take on this job."

Republicans are likely to seek a commitment from Garland not to interfere in the Hunter Biden case, where federal investigators in Delaware have been examining multiple financial issues involving the younger Biden, including whether he violated tax and money laundering laws in business dealings in foreign countries, principally China, two people briefed on the probe told CNN in December.

Republicans are also sure to push Garland to fully investigate Democratic New York Gov. Andrew Cuomo, after reports last week that federal investigators were investigating his handling of some of the data surrounding Covid-19 deaths in long term care facilities in New York.

Garland has said he wouldn't have accepted the attorney general nomination without assurances from Biden about his independence.

Democrats, meanwhile, are likely to push Garland on whether the Justice Department will investigate Trump, particularly following the January 6 riots that led to his impeachment. Even Senate GOP Leader Mitch McConnell, after voting to acquit Trump in the Senate trial, suggested that the criminal justice system is the right venue to consider those allegations instead.

Garland is also likely to face questions over his plans to steer the Justice Department amid policy debates over race and the criminal justice system, which came to the fore after a summer of mass protests spurred by the police killings of Black men and women.

Prior to his appointment as a federal judge, Garland served as principal associate deputy attorney general at the Justice Department, where he supervised the investigation of the 1995 Oklahoma City bombing and led the investigations of the 1996 Olympics bombing in Atlanta.