The Rev. Al Sharpton remembers George Floyd as an 'ordinary brother' who changed the world 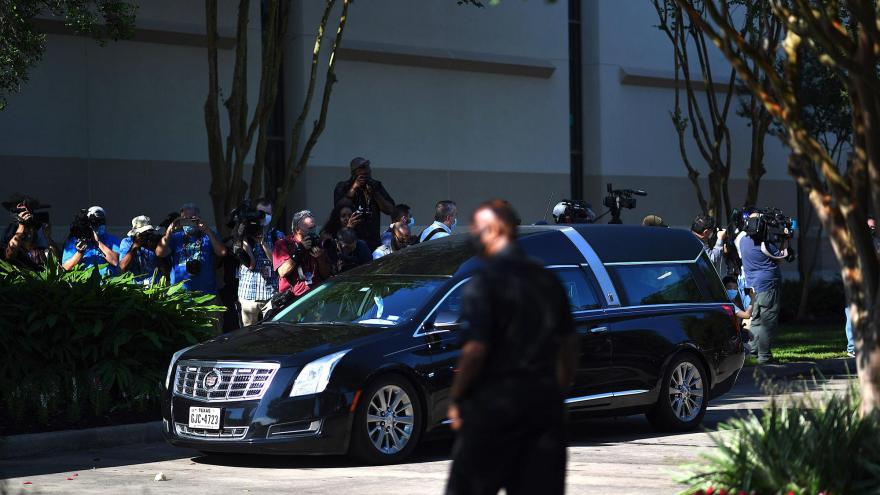 The casket with George Floyd arrives at the Fountain of Praise church where services will be held on June 8, 2020 in Houston, Texas.

(CNN) -- George Floyd was an "ordinary brother" from Houston's housing projects who "nobody thought much about," which makes his central role in a generational movement that much more powerful, the Rev. Al Sharpton said at his funeral Tuesday.

"God took the rejected stone and made him the cornerstone of a movement that's going to change the whole wide world," Sharpton said.

"Your family is going to miss you George, but your nation is going to always remember your name. Because your neck was one that represents all of us, and how you suffered is how we all suffer," he added.

Sharpton was one of a number of family, friends and prominent figures who gathered at The Fountain of Praise Church in Houston on Tuesday to celebrate Floyd's life and issue a clarion call for justice.

Actor Jamie Foxx was in the audience and R&B artist Ne-Yo performed a rendition of "It's So Hard to Say Goodbye to Yesterday" by Boyz II Men. Boxing champion Floyd Mayweather is handling all the expenses for Floyd's funeral.

Family members spoke about Floyd as a "gentle giant," and friends from high school and beyond fondly recalled his athletic prowess in football and basketball.

The funeral came two weeks after Floyd was killed while in Minneapolis police custody. His death sparked protests in the US and around the world, which have called for changes in policing and law enforcement's relationship with black and brown communities.

Biden, the Democratic presidential candidate, drew from his Catholic faith to offer words of empathy to Floyd's family and implored Americans to take on the fight of racial justice.

"Ladies and gentlemen, we've got to deal with the denial of the promise of this nation to so many people for so long," Biden said in a message delivered via video. "It's about who we are, what we believe, and maybe most importantly, who we want to be."

Floyd's body was escorted by the Houston Police Department into Houston Memorial Gardens in Pearland. A white horse-drawn carriage carried his casket for about a mile to his final resting place.

It was followed by a second carriage with two large football balloons and a poster that read "Jack Yates 88" -- a reference to Floyd's high school alma mater and his football jersey number.

People lined up to watch the procession and yelled "George Floyd" and "Say his name" as the carriage passed by.

He was buried next to his mother -- who Floyd called out for in his final moments.

"You called for mama. We're going to lay your body next to hers," Sharpton said. "But I know mama's already embraced you, George. You fought a good fight. You kept the faith. You finished your course. Go on and get your rest now. Go on and see mama now. We're going to fight on."

Biden: 'We must not turn away'

The service was a celebration of Floyd's life, said Mia K. Wright, the co-pastor of The Fountain of Praise church.

"In the tradition of the African-American church, this will be a home-going celebration," Wright said.

"Now you know what that means, that means foot-stomping, toe-tapping, shouting 'Hallelujah,' praising God, because we are celebrating his life," Dr. Remus Wright added.

In Biden's speech, he addressed Floyd's 6-year-old daughter, Gianna, and called on Americans to look through her eyes and question why racial injustice exists.

"Looking through your eyes, we should also be asking ourselves why the answer is so often too cruel and painful," he said. "Why, in this nation, do too many black Americans wake up knowing that they could lose their life in the course of just living their life? Why does justice not roll like a river or righteousness like a mighty stream? Why?

"Ladies and gentlemen, we can't turn away. We must not turn away. We cannot leave this moment thinking, we can once again turn away from racism," said Biden, the expected Democratic nominee for president.

Rep. Jackson Lee likened Floyd to the Biblical figures of Jesus and the prophet Isaiah.

"We know that centuries ago, they took a man, wicked men, put him on the cross. (They) did not understand that though they were intending wickedness, that out of much intention of wickedness came goodness," she said Tuesday.

Floyd was born in North Carolina, where hundreds of people lined up Saturday for a public viewing of his casket. Floyd graduated from Jack Yates High School in Houston in 1992, where he helped the football team win the state title. He also played basketball as a power forward.

Before moving to Minneapolis, Floyd was well known in the Houston music scene, rapping with a group called Screwed Up Clik (SUC).

Floyd died May 25 after former police officer Derek Chauvin pressed his knee into Floyd's neck for nearly nine minutes during an arrest.

On Monday, thousands of mourners gathered at The Fountain of Praise church to pay their respects to Floyd. The memorial was the third stop in a series of events to celebrate his life.

Floyd was a huge role model for a lot of people, his brother, Philonise Floyd, said during Monday's visitation ceremony.

"He was the first person who everybody looked up to in our neighborhood because he was the first one to get a scholarship to go and play basketball or football when he wanted to do," Philonise Floyd said.

Floyd was someone who also had a beautiful soul, his younger brother, Rodney Floyd, said.

"If he was told he would have to sacrifice his life to bring the world together, and knowing him, I know he would've did it," Rodney Floyd said.

He added that he's still processing the death. "It seems unreal because, you know, every day is like waiting on that phone call. I'm still calling his phone number."