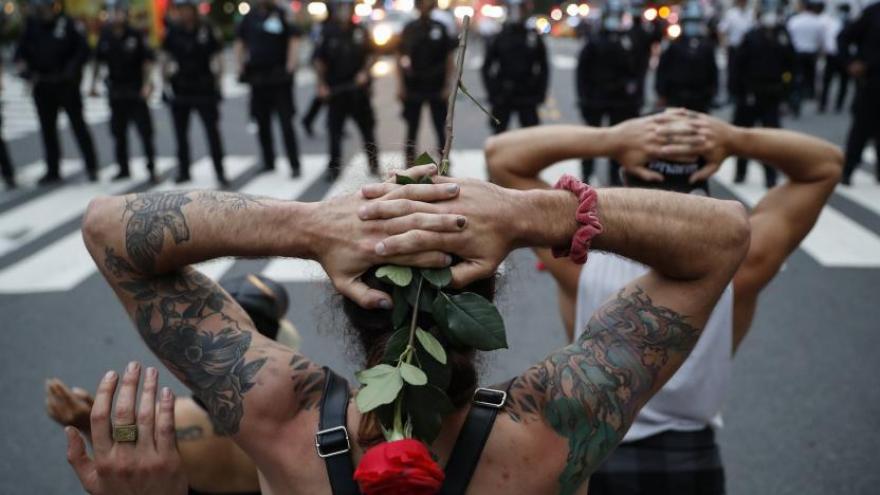 Throngs of protesters have taken to the streets since George Floyd died on May 25 to demand the arrest of all four officers involved in his death.

(CNN) -- A judge on Thursday set bail for three former Minneapolis police officers charged in George Floyd's death at $1 million each, or $750,000 under certain conditions, including that they do not work in law enforcement or have any contact with Floyd's family.

The charges follow those first brought against Derek Chauvin, the officer who pinned Floyd to the ground by his neck for nearly 9 minutes.

Lane and Kueng helped restrain Floyd, while Thao stood nearby.

All three officers appeared before Judge Paul R. Scoggin wearing orange prison uniforms and masks. Each stood inside a cubicle at a downtown Minneapolis courtroom. A plexiglass window provided a hole to speak through.

Thao appeared first. His lawyer noted that Thao provided a statement to the Minnesota Bureau of Criminal Apprehension and turned himself in when an arrest warrant was issued.

Attorneys for the two other defendants worked to contrast their clients' experience as police officers with Chauvin's, who spent more than 18 years with the Minneapolis Police Department.

When Floyd's death took place, it was Kueng's third shift as a police officer, said Thomas Plunkett, his attorney. Chauvin, he added, was Kueng's training officer.

Plunkett said Kueng turned to Chauvin at one point and said, "You can't do this."

Lane had been on the police force for four days when Floyd died, according to his attorney Earl Gray. Lane was "doing everything he thought he was supposed to do as a four-day police officer," Gray said.

"You've got a 20-year cop in the front and my guy is in the back there with four days," Gray said after his court appearance. "I don't know what you're supposed to do as a cop."

When asked by CNN whether he was implying Lane was following orders, Gray said no. But his client thought that what he was doing was right, Gray said, because Chauvin refused to turn Floyd on his side after Lane asked if they should.

"George Floyd mattered. He was loved. His family was important. His life had value," Ellison said. "We will seek justice for him and for you, and we will find it."

Meanwhile, Floyd's family and friends gathered for a memorial at North Central University in Minneapolis, the first of several memorials planned in Floyd's honor in the coming days.

At one point, the congregation stood for 8 minutes and 46 seconds -- the amount of time Chauvin knelt on Floyd's neck.

Rev. Al Sharpton denounced racism during the eulogy, saying, "What happened to Floyd happens every day" in all areas of American life.

"The reason we could never be who we wanted to be and dreamed of being is you kept your knee on our neck," Sharpton said. "We don't want no favors, just get up off of us."

Sharpton said a march for criminal justice reform would be held in Washington, D.C., on August 28 -- the 57th anniversary of the iconic March on Washington, where Martin Luther King Jr. delivered his speech, "I Have a Dream."

"We need to go back to Washington and stand up, black, white, Latino, Arab, in the shadows of Lincoln and tell them this is the time to stop this," Sharpton said.

Atlanta Mayor Keisha Lance Bottoms told CNN's Nick Valencia that she walked with protestors downtown because she "wanted to feel the energy of our people" after watching the George Floyd memorial.

Bottoms thanked demonstrators for "peacefully protesting in the spirit of Martin Luther King, Jr." and told them "I agree with you and I say, 'No justice, no peace.'"

Some in the crowd booed Bottoms mercilessly.

She said she wanted to tell protesters they mattered and reminded them this days of demonstrations need to carry over.

"The civil rights movement was not a day, it was not a moment in time, it was a movement, we are in the midst of a movement in this country," she said. "But it's going to be incumbent upon all of us to be able to get together and articulate more than our anger."

There were demonstrations for a 10th night in Minneapolis and in other cities. In Washington, a crowd gathered in front of a fence near the White House. Authorities from multiple agencies stayed at a distance and huge spotlights pointed lights at the group.

In New York, there were again some tense moments after the 8 p.m. curfew with hundreds of people defying the city order. A CNN crew saw some people detained not far from the Plaza Hotel where there were hundreds of officers.

In the meantime, officials released more details on Floyd's autopsy.

His death was due to cardiopulmonary arrest -- or the stopping of his heart -- according to the final autopsy results released Wednesday by the Hennepin County Medical Examiner.

His neck was compressed when the officer's knee was on it for more than eight minutes, the report says, but does not conclude that it directly caused his death.

The final report from the medical examiner says Floyd had bruises and cuts on his head, face, mouth, shoulders, arms and legs. But it finds no evidence that any of those injuries directly would have killed him.

The autopsy says Floyd had heart disease and a history of high blood pressure. A preliminary toxicology report found moderate levels of fentanyl and methamphetamine.

The county autopsy also indicates that Floyd had tested positive for coronavirus in April.

But an independent autopsy commissioned by the Floyd family disagreed with the county's conclusion, saying he died of "asphyxiation from sustained pressure."