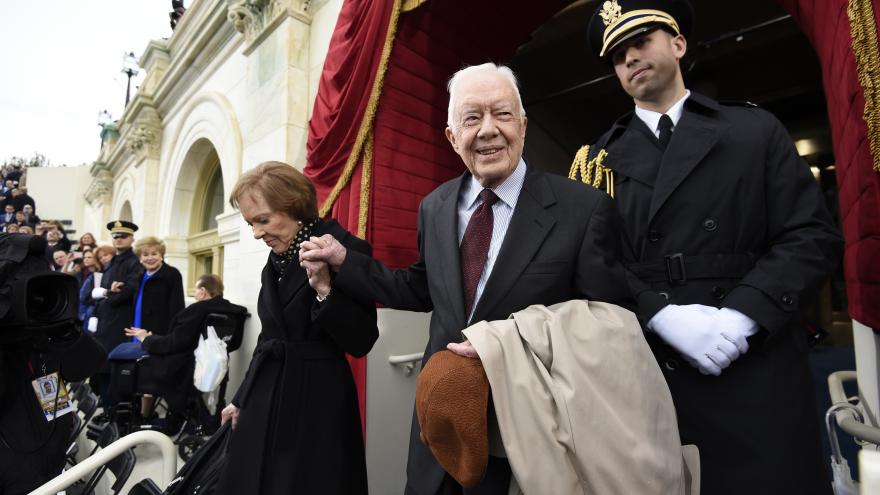 Former US President Jimmy Carter and First Lady Rosalynn Carter arrive for the Presidential Inauguration of Donald Trump at the US Capitol on January 20, 2017, in Washington, DC. - Saul Loeb/Getty Images

"President and Mrs. Bush look forward to returning to the Capitol for the swearing in of President Biden and Vice President Harris," Ford said in a statement. "I believe this will be the eighth inauguration they've had the privilege of attending -- President Trump's being the most recent -- and witnessing the peaceful transfer of power is a hallmark of our democracy that never gets old."

The 43rd President was among the first high-profile Republicans to congratulate Biden on his victory after CNN and other media organizations projected he would win the presidency in November.

"Though we have political differences, I know Joe Biden to be a good man, who has won his opportunity to lead and unify our country," Bush said. "The President-elect reiterated that while he ran as a Democrat, he will govern for all Americans. I offered him the same thing I offered Presidents Trump and Obama: my prayers for his success, and my pledge to help in any way I can."

"President and Mrs. Carter will not travel to Washington for the inauguration but have sent their best wishes to President-elect Biden and Vice President-elect Harris and look forward to a successful administration," Deanna Congileo, a spokeswoman for the Carter Center, said in a statement to CNN.

The Associated Press first reported that the Carters will not attend. At 96, Carter is America's oldest living president. In addition to his advanced age, Carter has survived brain and liver cancer and was hospitalized in 2019, and senior citizens are more vulnerable to Covid-19 than younger people.

Biden's inauguration on January 20 will be largely virtual, with a televised parade in lieu of the typical large, crowded event. The inaugural committee has also asked Americans not to travel to Washington, DC, for the ceremony.

This story and its headline have been updated with George W. Bush's plans.