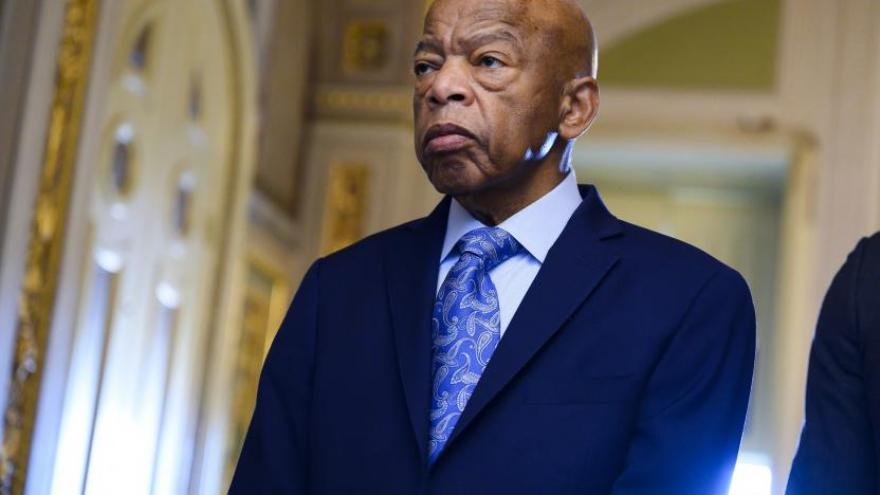 The death of US Rep. John Lewis on Friday has left Georgia's Democratic Party without a candidate in the 5th Congressional District -- and with a fast-approaching deadline to select his replacement on the ballot for the November general election.

(CNN) -- It's a position Georgia Democrats do not want to be in.

The death of US Rep. John Lewis on Friday has left Georgia's Democratic Party without a candidate in the 5th Congressional District -- and with a fast-approaching deadline to select his replacement on the ballot for the November general election.

The committee will narrow down the applicants to between three to five prospects to recommend to the state executive committee, who will meet virtually Monday at noon to consider the recommendations.

The party said it would make public the three to five recommended individuals as well as the full list of applicants before noon Monday.

Under Georgia law, the party will have to inform the Georgia secretary of state's office whether they intend to appoint a replacement by Monday, and then inform the office who their replacement nominee is shortly thereafter, Georgia Deputy Secretary of State Jordan Fuchs told CNN.

The Georgia Democratic Party said it would publicly announce the name of the nominee.

The source described Williams as having close ties to Lewis. Her state senate district sits within the 5th Congressional District and many people "in her world are connected to his," the source said.

Asked what kind of candidate the committee is looking for, Heard-Tucker told CNN on Sunday, "I don't think we've gotten to that point yet."

"We're not there yet for a committee to say what we're looking for. It's going to be hard to fill his seat," Heard-Tucker said, adding, "John has such huge shoes to fill."

The application asks six questions including, "why are you the best person to represent" the 5th District and "what ties" the individual has to the district.

Vincent Fort, who served in the state Senate for more than two decades and ran for Atlanta mayor in 2017, told CNN that he submitted his application and hopes to be considered, but has concerns about an "opaque" process.

"I think that the process ought to be open and transparent," Fort told CNN on Sunday. "We cannot be in a situation where there's a small group of people in a smoke-filled room."

Fort said that while "there will never be another John Lewis," the nominee should be a person with a background in activism, but also policy, and whomever "follows him ought to follow his general commitment for voting rights and for better health care."

But he said Lewis' successor should not be expected to be in lock-step with Lewis' policy positions.

"It's unfair to say you have to be another John Lewis," Fort said.

Lewis easily won the June Democratic primary with 87% of the vote.

Barrington Martin II, a progressive who was the sole challenger to Lewis in the Democratic primary, also applied for the nomination and voiced concern about the process.

"For a long time now, the Democratic party has been riddled with archaic, outdated, and mundane ideologies and it has not served the greater good of the people it seeks to represent. Evidence of this can be seen within this entire process in which the power of choice and choosing one's own fate has been removed from the people and replaced with bureaucratic technicalities that serve only the few and not the many. I understand that these are simply the rules; however, the people who review all of these applications have the power to suggest the necessary changes that should be made that would better serve the people," Martin said in a statement provided to CNN Sunday.

Lewis died Friday at the age of 80. In December, he was diagnosed with Stage 4 pancreatic cancer.

Martin in his statement defended his decision to run against Lewis, saying he values the district's constituents over politics.

"I was proactive in ensuring the people of this district would be looked after in the result of Congressman Lewis' untimely death; and now we are here," Martin said.

Whomever the Democrats pick will face Republican Angela Stanton-King, a criminal justice reform advocate and former reality star, in the November general election.

Stanton-King was uncontested in the Republican primary for the district. In February, she received a pardon from President Donald Trump for her involvement in a stolen vehicle ring in 2007, for which she served six months of home confinement.

Democrats are confident the seat will remain in their hands.

Former Democratic presidential nominee Hillary Clinton carried the district by more than 70 points in 2016. The district is rated as Solid Democratic by Inside Elections with Nathan L. Gonzales, who is also a CNN contributor.

This story has been updated to include new information from the Georgia Democratic Party about the number of applicants and more about the selection process.