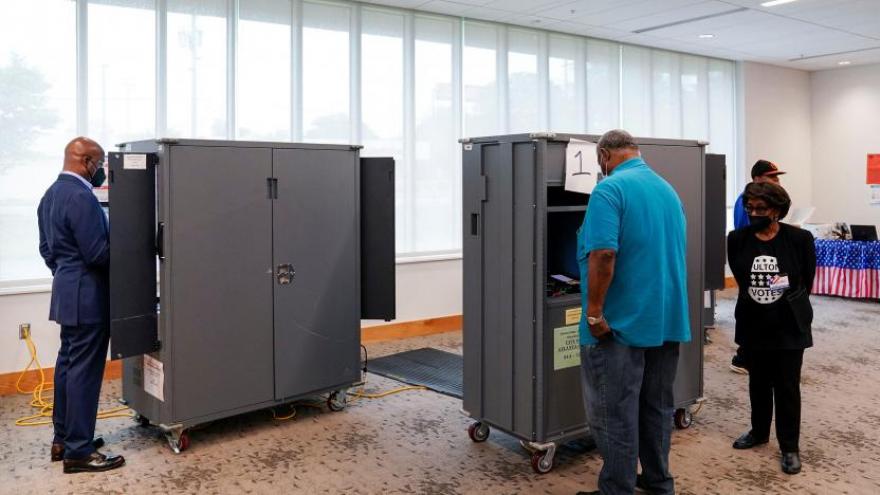 Sen. Raphael Warnock casts his ballot in the state's general primary at a Fulton County polling station in Atlanta, Georgia, on May 6.

(CNN) -- Early voting has surged in the Georgia primary, with a record-number ballots cast ahead of Tuesday's contests.

While Republicans have claimed it's a sign of success after the passage of new voting laws that Democrats and others had warned would restrict ballot access, voting activists say the surge is not showing the larger picture of the obstacles voters are enduring to get their vote counted this year.

As of May 21, nearly 800,000 were cast, according to GOP Secretary of State Brad Raffensperger, during the three-week early voting period. He said it was a record and touted SB 202, the voting law from 2021, as the reason for the success.

"The incredible turnout we have seen demonstrates once and for all that Georgia's Election Integrity Act struck a good balance between the guardrails of access and security," Raffensperger said in a statement announcing the turnout numbers.

SB 202 added new voter identification requirements for absentee ballots, empowered state officials to take over local elections boards, limited the use of ballot drop boxes and made it a crime to approach voters in line to give them food or water.

Activists say it's their work that has brought about the so-called success. Several voting rights organizations across the state like Black Voter Matter and LWV have been educating voters on the new rules. The work has included setting up hotlines to starting grassroots educational networks to holding voter turnout events on weekends.

"The high early vote turnout shows that this message has been heard by voters," Susannah Scott, president of the Georgia Chapter of League of Women Voters, told CNN on Monday.

Cliff Albright, executive director of Black Voters Matter, noted that the turnout rate is not indicative of Black voters who have been discouraged by the new rules. Activists had warned that the new laws would hurt Black voter turnout who make up roughly a third of the state's population.

In 2020, a record 1.3 million Georgians voted absentee. Absentee voting rules have since changed. While anyone in Georgia can vote by mail without needing an excuse, voters now must provide their Georgia driver's license number or state ID along with other identifying information like birth date when applying for a mail-in-ballot application. Those lacking the required ID forms can use other paperwork like a utility bill or bank statement.

What remains to be seen is how many voters opted to vote by mail this time around, and whether the surge in early voting will balance that out. Election officials in Georgia won't start counting mail-in ballots until 7 a.m. on Election Day and voters have until three days after to fix any problems with their ballot so it can be counted.

"Now, the bigger question is this: How many people decided not to shift from vote-by-mail to early voting. ... We're so frustrated, discouraged that they didn't do either one," Albright told CNN.

Some voting rights groups say that the early voting numbers show that voters are taking the safer route to casting a ballot.

"My sense is that voters are uncertain about how updates to voting laws will impact them and have opted to vote early to ensure that they have time to fix any problems that may arise while there is still time to do so," said Scott.

Some voters think that the suppression is being felt more in rural areas like Griffin, Georgia, an hour south of Atlanta. There, voter intimidation is more frequent, said Dexter Wimbish an attorney in the town.

Wimbish, who took part in a recent Saturday "Souls to the Polls" event in Griffin, told CNN that even Stacey Abrams and US Sen. Raphael Warnock being on the ballot isn't going to stop the impact of the new laws.

"I don't think that the fact that we've got two excellent candidates like Stacey (Abrams) and Senator Warnock, you know that is certainly a plus, but it's not going to mitigate the protracted efforts by those on the other side to limit the ability of people to cast a vote without any restrictions," Wimbish said.

One new rule doesn't allow people to give a voter waiting in line food or water. Paul Glaze, communications manager for the New Georgia Project, said the rule could trip up some voters, as rain is expected and people might want to give out ponchos.

"Voters are confused as to whether it's illegal to give out ponchos or the like," Glaze said. "We do expect long lines in some places -- we saw up to two hours long on Friday."

The group will have a hotline for reporting issues.