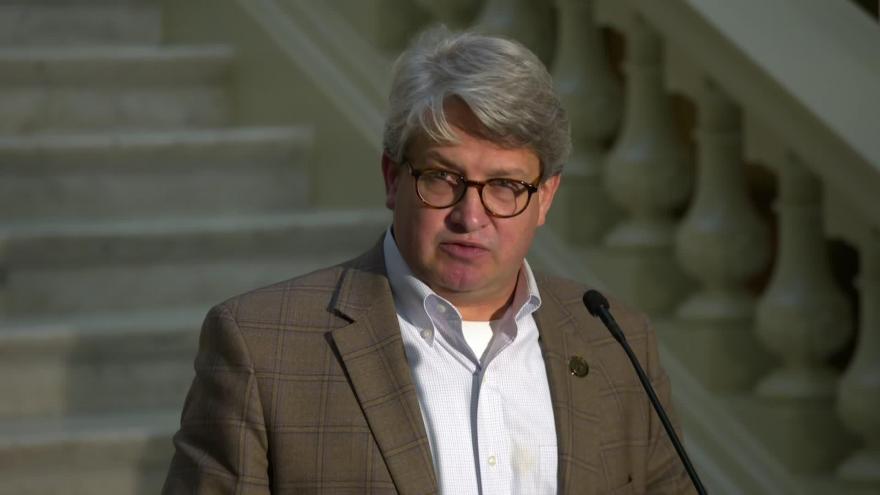 A top Georgia election official said Monday that "everybody's vote did count" in the state's November elections as he shot down a list of voter fraud conspiracy theories President Donald Trump aired in a call with Georgia Secretary of State Brad Raffensperger this weekend.

(CNN) -- A top Georgia election official said Monday that "everybody's vote did count" in the state's November elections as he shot down a list of voter fraud conspiracy theories President Donald Trump aired in a call with Georgia Secretary of State Brad Raffensperger this weekend.

"The reason I'm having to stand here today is because there are people in positions of authority and respect who have said their votes didn't count, and it's not true," said Gabriel Sterling, the voting systems implementation manager for the Georgia Secretary of State's office, during a news conference.

In audio first reported by The Washington Post and obtained by CNN, Trump is heard pressuring Raffensperger, who is also a Republican, to "find" votes to overturn the election in Georgia, which he lost to President-elect Joe Biden. Raffensperger rebuffed Trump's demand.

In excerpts of the stunning one-hour phone call Saturday, Trump lambasted his fellow Republican for refusing to falsely say that he won the election in Georgia and repeatedly touted baseless claims of election fraud.

"The people of Georgia are angry, the people of the country are angry. And there's nothing wrong with saying that, you know, um, that you've recalculated," Trump said in one part of the call. Raffensperger responded, "Well, Mr. President, the challenge that you have is, the data you have is wrong."

In another part, Trump said: "So look, all I want to do is this, I just want to find 11,780 votes, which is one more than we have. Because we won the state."

Sterling said Monday that the President's voter fraud claims are "all easily, provably false" as he ran through some of the conspiracy theories that Trump floated on his call with Raffensperger.

Addressing Trump's claim that ballots had been shredded, Sterling said flatly: "There is no shredding of ballots going on. That's not real. It's not happening."

"It's not a real thing. That's not happening," he said.

As he sought to emphasize the unfounded nature of Trump's claims, Sterling lamented the way the President's message could still undermine Georgia residents' faith in the state's election system ahead of Tuesday's critical US Senate runoffs.

If either of the incumbent Republicans -- Sens. Kelly Loeffler and David Perdue -- holds on to their seat, the party will maintain its majority control in the chamber.

If Democratic challengers Jon Ossoff and the Rev. Raphael Warnock both prevail, however, Democrats would gain control of the Senate thanks to Vice President-elect Kamala Harris' tie-breaking vote.

"If you're a Georgia voter, if you want your values reflected by your election officials, I strongly beg and encourage you, go vote tomorrow. Do not let anybody discourage you. Do not self-suppress your own vote. Do not make a self-fulfilling prophecy out of doing this. Don't let anybody steal your vote that way," Sterling said.

"And that's what's happening. If you self-suppress, you are taking away your important voice from this election."

Georgia recertified its presidential election results in December following three counts of ballots that yielded no evidence of the widespread voter fraud Trump and his allies have claimed.

Despite this, the President has launched an extraordinary effort to change the results of the race in Georgia and other key battleground states that Biden won. The futile bid has garnered support from a number of congressional Republicans, who plan to challenge electoral votes when Congress is expected to certify Biden's victory on Wednesday.

None of the challenges, though, will change the fact that Biden will be the next president of the United States, and multiple courts have thrown out challenges to the election.

"At the end of the day, we want to make sure people understand their votes count," Sterling said Monday. "Every person, every voice matters."

This story has been updated with more from the news conference.