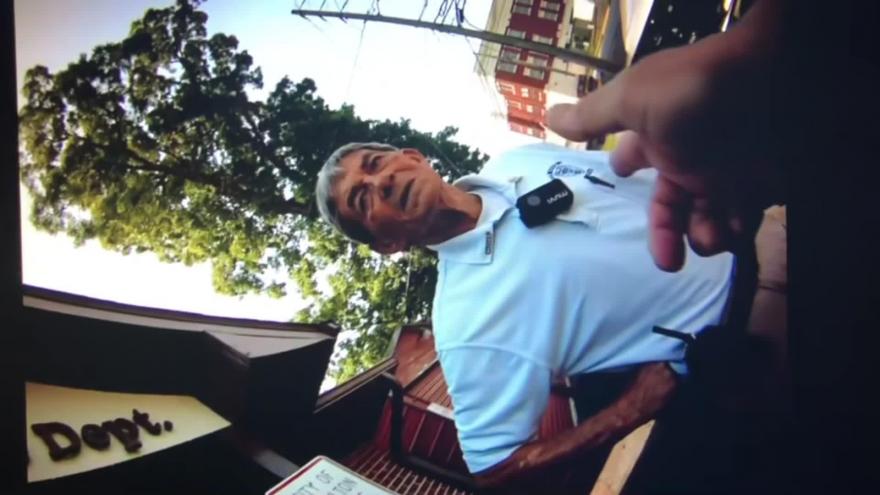 Gene Allmond, the former police chief of Hamilton, Georgia, in an image from a police body camera in which he was caught making racist comments about slavery.

(CNN) -- The police chief and a patrolman in a small Georgia town have been pushed out of their jobs after they were caught having a racist, misogynist conversation while preparing to patrol a Black Lives Matter Rally in June 2020, according to Buddy Walker, an assistant to Hamilton Mayor Julie Brown.

CNN has not been able to obtain the unedited audio, and the version provided by the city of Hamilton censored some of the words the men used.

?Walker said the police department had not been using body cameras regularly but were "trying to get them to work."

"They were not aware that Officer Brooks' camera was on. It was the first time they wore them and they were trying to figure out how they worked," Walker said. ?

Hamilton has a population of nearly 1,900, according to the US Census Bureau's 2019 estimate, and is roughly 90 miles southwest of Atlanta. It is the county seat of Harris County, along the Georgia-Alabama state line north of Columbus.

Walker said the body camera video came to his attention January 25 when a city employee called and told him about it. The Hamilton Police Department's body cameras were being inspected after the city council inquired why police did not use them and were told it was because they didn't work, according to Walker.

"The reaction that I think everyone had was horrified. The first word that comes to mind is horrified and it goes on to disgusted and disappointed and then you run out of words," Walker told CNN.

Walker said "there never was any doubt of what would happen" and both Allmond and Brooks were offered the opportunity to resign. Allmond resigned that night, according to Walker. Brooks was terminated the following day for failing to return city property to the police department, a violation of the agreed-upon terms of resignation, Walker said.

Walker said the reaction in the community has been mixed but mostly positive.

"People are glad to see we did the right thing but let's face it, there are some on the other side. We have received emails here that are not appropriate," he said.

In a statement released Monday, Executive Director of the Georgia Association of Chiefs of Police A.A. Butch Ayers expressed his "shock and disappointment" at the language used in the recording.

"Whether they were recorded or not, there is no excuse for such derogatory and demeaning language to be used by anyone, especially a police chief," Ayers said. "The actions and statements of Chief Allmond are deplorable and represent neither the values of our Association nor the hundreds of police chiefs and thousands of police officers in our great State."

"Throughout Georgia, police chiefs and their officers work hard every day to earn the trust and respect that are critical for a safe community. Allmond's behavior is the antithesis of our values and beliefs," Ayers added.

CNN has been unable to reach Allmond, Brooks or the Georgia Association of Chiefs of Police for comment.