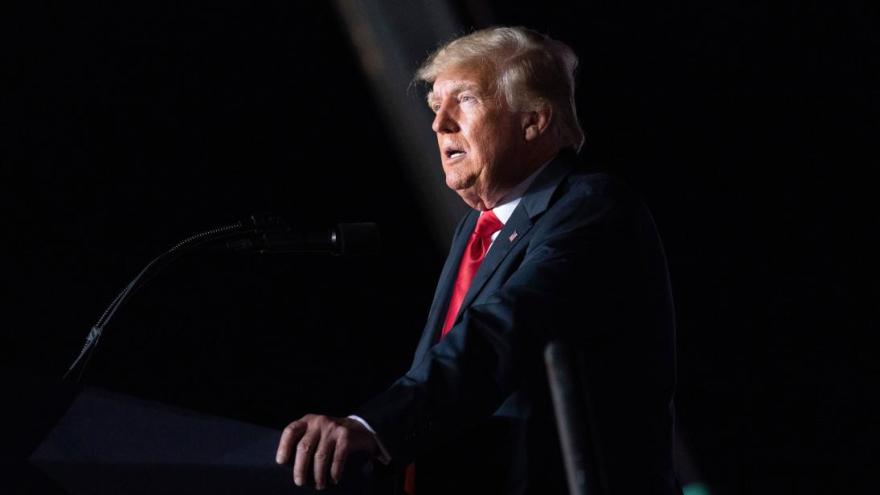 Former President Donald Trump speaks at a rally on September 25, 2021 in Perry, Georgia.

(CNN) -- The Atlanta-area prosecutors scrutinizing former President Donald Trump's attempts to overturn the 2020 election in Georgia said Tuesday that all 16 of the "fake electors" who participated in a plan to subvert the Electoral College are now targets of an ongoing criminal investigation.

Court documents filed late Tuesday reveal Fulton County District Attorney Fani Willis has informed all 16 of the individuals who signed an "unofficial electoral certificate" that was ultimately sent to the National Archives in late 2020 they may be indicted in the probe.

The significant development indicates prosecutors are moving closer to possible criminal charges against those involved in the effort. It also suggests the probe may be drawing closer to Trump himself, as it comes on the heels of subpoenas that were issued to several members of the former President's legal team who took part in overseeing the effort to overturn the election results in Georgia and other key battleground states.

"Each of the sixteen persons who signed the unofficial Elector Certificate ultimately submitted to the National Archives received a similar target letter alerting, that person both that his testimony was required by the special purpose grand jury and that he was a target of the investigation," prosecutors said Tuesday.

Court filings earlier Tuesday had revealed that 11 of the 16 fake GOP electors received letters notifying them that they were targets of the investigation, and not merely witnesses.

Willis' office informed lawyers for those fake electors that the status change from witness to target was the result of "new evidence" that has come to light over the course of the probe.

"As our investigation has matured and new evidence has come to light, in a spirit of integrity we feel it only fitting to inform you that your clients' status has changed to 'Target,'" Willis' office said, according to a defense filing.

The Trump campaign's role in creating false election documents as a way to supplant Joe Biden's win in Georgia has come under increasingly scrutiny by prosecutors in Georgia, as well as the Justice Department in recent months. CNN previously reported that Trump campaign officials oversaw efforts to put forward illegitimate electors in seven swing states Trump lost. The House select committee investigating the January 6, 2021, insurrection has linked the effort to Trump's "seven-part plan" to overturn the election that culminated in the US Capitol attack.

That plan, according to the committee, included the fake electors, a pressure campaign on then-Vice President Mike Pence to stop the counting of electoral votes, and the assembly of a violent mob that Trump directed to march to the Capitol.

Attorneys for the electors say they are moving to "quash" grand jury subpoenas for appearances beginning on July 25, calling them "unreasonable and oppressive."

Among the 16 fake electors now considered targets in the grand jury investigation is state Republican Party Chairman David Shafer. CNN previously reported that the Fulton County DA sent a target letter to Shafer, warning him that he may be indicted as part of her investigation.

The court documents reflect a shift by Georgia prosecutors, as they previously reassured Shafer and other fake electors for Trump that they were considered witnesses, rather than subjects or targets, in the grand jury investigation -- a notable distinction that suggests Willis' office did not view their actions as criminal at the time, two sources told CNN.

That appears to have changed in late June, according to the court records filed by defense attorneys on Tuesday, after prosecutors were informed the 11 electors "were, in fact, planning to testify substantively to the grand jury."

"The unavoidable conclusion is that the nominee electors' change of status was not precipitated by new evidence or an honestly-held belief that they have criminal exposure but instead an improper desire to force them to publicly invoke their rights as, at best, a publicity stunt," the court filing stated.

Shafer, who has faced inquiries from federal investigators, Georgia prosecutors and the House select committee investigating the January 6 attack on the US Capitol, acted as a pro-Trump elector in Georgia. He also helped organize the fake slate of electors in the Peach State, which Trump lost by nearly 12,000 votes.

Willis' office appeared to be trying to determine whether the pro-Trump electors in Georgia had any knowledge that their actions may have been a component of a broader and potentially illegal plot to pressure election officials and overturn Biden's victory, a source previously told CNN.

Georgia has remained a central focus for investigators at state and federal levels. The Atlanta-area investigation was prompted after Trump's infamous phone call pressuring Georgia Secretary of State Brad Raffensperger to "find" the votes needed to swing the state to him was revealed.

Shafer told the House select committee in February that the fake electors scheme came at the direction of the Trump campaign after the then-President lost the state's vote.

CNN previously reported that Rudy Giuliani led the Trump campaign officials in spearheading the illegitimate electors as a part of the broader plot to overturn Biden's victory when Congress counted the electoral votes on January 6.