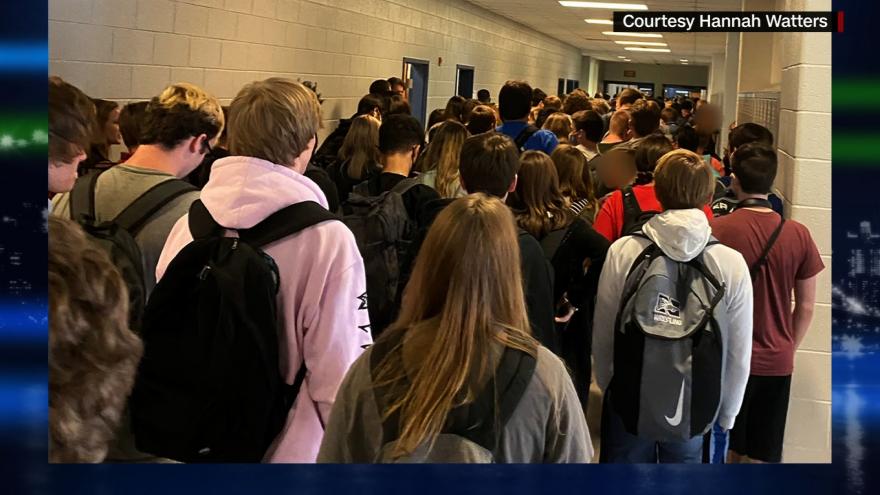 (CNN) -- A Georgia high school that came under scrutiny last week when a student shared a photo of a crowded hallway will temporarily move to virtual learning after it reported nine cases of Covid-19, according to a letter the school district sent to parents Sunday.

"As a result of our being informed of nine cases of Covid-19 at North Paulding High School following the first week of in-person instruction, along with the possibility that number could increase if there are currently pending tests that prove positive, we have consulted with the Department of Public Health and are temporarily switching the instructional method to Digital Learning at NPHS," the letter from Paulding County Schools Superintendent Brian Otott said.

The high school will only offer digital learning Monday and Tuesday. Tuesday evening families will be informed of whether remote instruction will continue or if students can return to school, the letter said.

Meanwhile, "the school will be thoroughly cleaned and disinfected," Otott wrote. The school district will also work with the Georgia Department of Public Health to identify anyone else who had close contact with the confirmed patients and have yet to be identified.

Principal Gabe Carmona wrote in a separate letter Saturday that "six students and three staff members who were in school for at least some time last week ... have since reported to us that they have tested positive."

One student at a middle school in the county, Sammy McClure, Sr. Middle School, has tested positive for the coronavirus, according to a letter sent by Principal Jaynath Hayes to parents Sunday.

The student was in school "for at least some time last week" and reported to the school that they have tested positive, the letter said.

The school is being cleaned by custodial staff and is following DPH recommendations, according to the letter.

The school is asking anyone whose child exhibits symptoms to have them tested as soon as possible and notify the school.

The Paulding cases are just the latest instance of students and teachers testing positive for Covid-19 after returning to school, highlighting the risks of resuming in-person classes amid the coronavirus pandemic.

Hannah previously told CNN she shared the photo because she was concerned for the safety of her classmates and school staff, as well as the wider community.

"We're all pretty concerned about going back," Hannah said of her friends Sunday. "And I know a lot of my teachers are, too."

In his letter Sunday, Otott apologized to families for "any inconvenience this schedule change may cause, but hopefully we all can agree that the health and safety of our students and staff takes precedence over any other considerations at this time."

Dr. Jonathan Reiner, a CNN medical analyst and professor of medicine at George Washington University said Sunday it was nice the school would be disinfected. But he said it wouldn't have a large effect on containing the virus, pointing to the virus' high rate of spread in Georgia.

Otott previously said in a letter to the community that the viral photo was taken out of context and that class changes in high school were a challenge.

"It is an area we are continuing to work on in this new environment to find practicable ways to further limit students from congregating. Students are in this hallway environment for just a brief period as they move to their next class," the superintendent wrote.

He added: "There is no question that the photo does not look good. ... Wearing a mask is a personal choice, and there is no practical way to enforce a mandate to wear them."

Otott's letter also said the district anticipated needing to make "adjustments." The district previously decided to make Thursday and Friday virtual learning days for students receiving in-person instruction, "so that all of our schools can step back and assess how things are going so far," Otott said.

Hannah said she was initially suspended for posting the photo. But on Friday, her mother told CNN the suspension had been reversed. Lynne Watters spoke with the school's principal Friday morning, she said, and was told her daughter would not be suspended and a suspension would not appear on her record. Hannah can return to school on Monday.

"I'd like to say this is some good and necessary trouble," she said Thursday. "My biggest concern is not only about me being safe," she said. "It's about everyone being safe because behind every teacher, student and staff member there is a family, there are friends, and I would just want to keep everyone safe."

Hannah said Sunday that she had received backlash and "threats" for sharing the photo. According to Hannah, her family and friends have received screenshots from group chats that included threatening language against her.

Hannah said she understands some students, especially seniors, might be worried about having their last year of high school taken from them, but said she doesn't want that.

"I just hope that sooner or later everyone can understand that I'm not trying to shut it down and when I did expose the school district, it wasn't to cancel the senior year, not to go after anyone," she said. "It was just to keep us all safe."