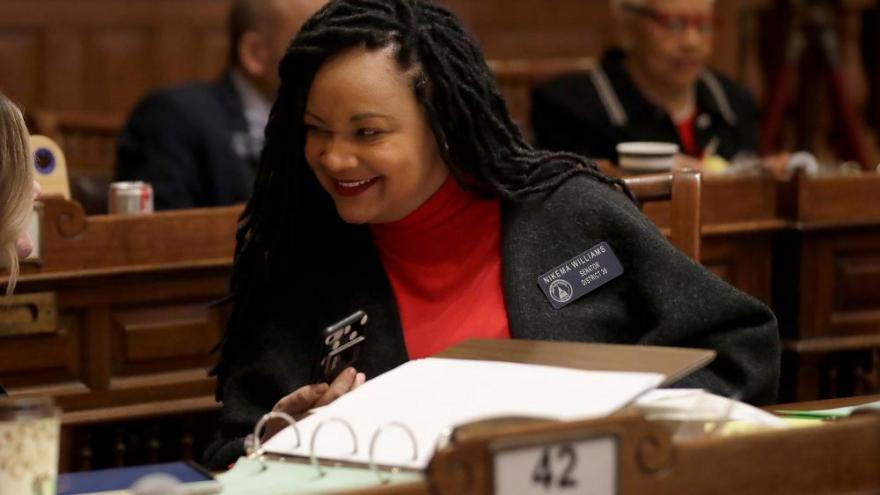 State Sen. Nikema Williams has been chosen to replace the late Rep. John Lewis on the ballot in November, paving the way for the first black woman elected to lead the Georgia Democratic Party to serve the Atlanta-area district in Congress next year.

(CNN) -- State Sen. Nikema Williams has been chosen to replace the late Rep. John Lewis on the ballot in November, paving the way for the first black woman elected to lead the Georgia Democratic Party to serve the Atlanta-area district in Congress next year.

The legacy of Lewis, a civil rights icon who was first elected to Congress in 1986, shone over the vote on Monday.

Lewis helped organize the Freedom Rides, spoke at the 1963 March on Washington and led the 1965 march across the Edmund Pettus Bridge in Selma, Alabama, where a state trooper fractured his skull with a billy club. That protest galvanized national support for the Voting Rights Act, which candidates for his seat pledged to defend and expand.

Williams, sitting in front of a framed picture of Lewis' mugshot from an arrest during the Nashville sit-in protests of the early 1960s, campaigned on Zoom before her fellow members of the party's executive committee while "still grieving" the loss.

She noted her upbringing in rural Alabama, where Lewis also grew up, and called herself "a student of the John Lewis school of politics" who has "practiced the art of getting into 'good trouble.'"

Williams, a state senator representing a liberal Atlanta-based district, noted that she was arrested and taken out of the state Capitol "with zip ties on my hands" during a November 2018 protest over the results of the close gubernatorial election.

"We need someone who is not afraid to put themselves on the line for their constituents in the same way that Congressman Lewis taught us to," she added.

The party's executive committee overwhelmingly voted for Williams over several other candidates, who were nominated from a pool of more than 130 applicants. The other candidates were state Rep. Park Cannon, Atlanta council member Andre Dickens, former Morehouse College President Robert Franklin and Georgia NAACP President James "Major" Woodall. The Democratic nominee in the deep blue district is likely to win the race.

"Nobody could possibly fill the shoes of Congressman Lewis," Williams said. "His leadership and fighting spirit is needed now more than ever in this country. I believe it is imperative that we choose someone with a long track record of fearlessly standing up for what is right and someone who will take on the endless attacks on our rights that we've grown accustomed to seeing from the Republican Party."