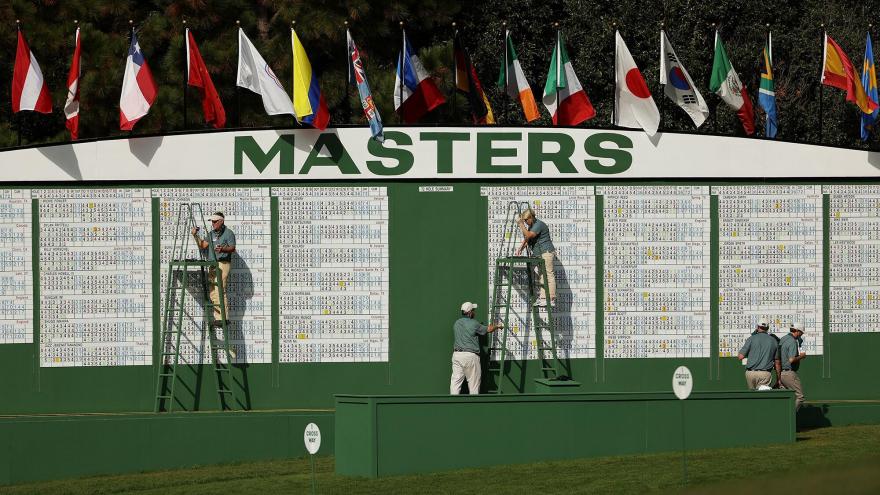 A leading Black civil rights group is calling on the PGA Tour to pull out of the upcoming Masters Tournament in Augusta after Republican Gov. Brian Kemp last week signed into law one of the nation's most restrictive voting rights. Course workers are shown during the final round of the Masters at Augusta National Golf Club on November 15, 2020.

(CNN) -- Georgia has a long history of attracting national sports events, but a controversial new voting law might have severe repercussions for that tradition.

A leading Black civil rights group is calling on the PGA Tour to pull out of the upcoming Masters Tournament in Augusta after Republican Gov. Brian Kemp last week signed into law one of the nation's most restrictive voting rights.

"The PGA Tour and Masters Tournament have both made commitments to help diversify golf and address racial inequities in this country -- and we expect them to not only speak out against Georgia's new racist voter suppression law -- but to also take action," the National Black Justice Coalition said in a statement.

The new law imposes new voter identification requirements for absentee ballots, empowers state officials to take over local elections boards, limits the use of ballot drop boxes and makes it a crime to approach voters in line to give them food and water. Voting rights groups have said the law would target the Black residents and other voters of color in the state.

The National Black Justice Coalition said professional golfers should refuse to play in Georgia until the law is repealed.

CNN has reached out to Augusta National and PGA Tour for comment.

Major League Baseball may also be faced with a decision. This year's MLB All-Star Game is scheduled to take place this summer at Truist Park -- home of the Atlanta Braves.

The executive director of the MLB Players Association says the union is open to discussing pulling the MLB All-Star game out of Georgia, according to a story published by Boston Globe on Friday.

Tony Clark told the Globe that "players are very much aware" of the law, but "as it relates to the All-Star Game, we have not had a conversation with the league on that issue."

CNN has reached out to MLB and the MLB Players Association for comment.

Previously, another sporting league changed its plans in response to another state's legislation. The NBA moved its 2017 All-Star game out of Charlotte, North Carolina, after a controversial transgender bathroom law was passed. The law was later repealed, and Charlotte hosted the All-Star Game in 2019.

The Women's National Basketball Players Association, many members of which have been champions for social justice and racial equality, has also condemned the new law in Georgia.

"SB 202 is a direct attack on the historic turnout and participation by voters during the November and January elections -- elections where Georgians voted to elect the first Black and Jewish senators from Georgia," the WNBPA said in a statement.

The statement adds that the law comes after an election where minority voters made their voices heard in record numbers.

"This is a racist backlash designed to silence the people's voices, mirroring the over 200 bills in state legislatures across the country designed to target voters and suppress democracy," the statement said.