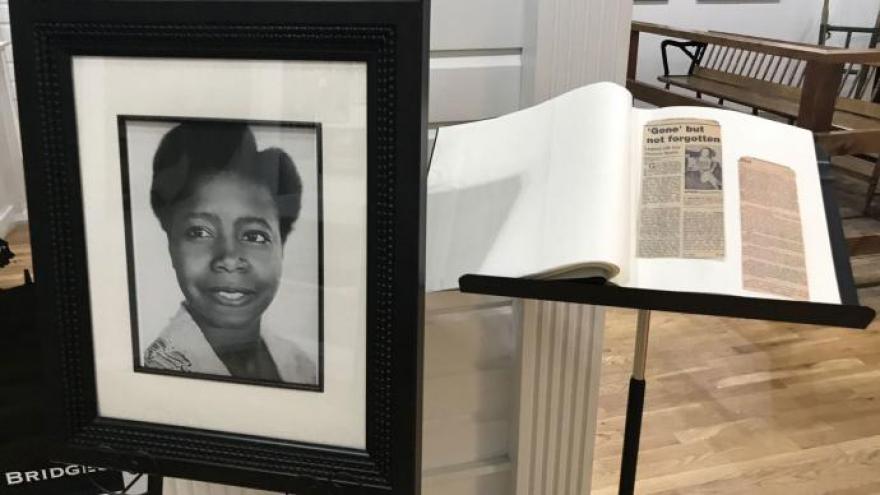 Butterfly McQueen's portrait and book display at the Road to Tara museum in Jonesboro, Georgia.

(CNN) -- Gabriel Johnson, a member of the Clayton County Tourism Authority Board, helps oversee the county's tourist sites including the Road to Tara museum, which features a small "Gone with the Wind" exhibit in a converted train depot.

But as an African American man, he has never stepped foot inside.

For Johnson, the museum celebrates a movie that has romanticized oppression against people who look like him.

"Gone with the Wind" is one of several American artworks and brands undergoing scrutiny amid a national movement for racial justice not seen since the 1960s.

In February a White man shot and killed 25-year-old Ahmaud Arbery, a Black man, while he jogged near Brunswick, Georgia. The subsequent deaths of Breonna Taylor, George Floyd and Rayshard Brooks at the hands of police sparked nationwide outrage and widespread racial justice reckoning.

The country music group Lady Antebellum has changed its name to Lady A, the Dixie Chicks are now The Chicks, Disney is re-theming its Splash Mountain ride, based on the controversial 1946 film "Song of the South", and PepsiCo will rename the syrup formerly known as Aunt Jemima.

HBO Max, owned by WarnerMedia, CNN's parent company, temporarily pulled "Gone with the Wind" from its streaming service, in reaction to criticism over the film's rosy depiction of slavery and its romanticized view of the Confederacy. HBO Max later restored the film with a new introduction by Jacqueline Stewart, an African American cinema professor at the University of Chicago.

The legacy of a troubled blockbuster

"Gone with the Wind" remains the largest US box office hit ever when adjusted for inflation. Based on the Pulitzer-prize winning novel by Atlanta native Margaret Mitchell, the belabored production was recognized for its groundbreaking cinematography, score and technicolor work.

It was also praised for the performances of its main actors, including Hattie McDaniel, the first African American to win an Academy Award for her role in the movie.

But during the 1940 Oscar ceremony, McDaniel had to sit in the back of the room, in the venue that was for Whites only. She and other Black actors were unable to attend the film's premiere at Atlanta's Loews Grand, due to Georgia's Jim Crow laws.

Systematic inequality has long plagued Georgia. Until recently, the state had been one of four states without a hate crime law. But Arbery's killing in February sparked statewide outrage and demands for action. Gov. Brian Kemp responded last week by signing a bill that allows judges to increase punishments against those who target victims based on race.

Conversations about demeaning racial depictions have now become part of some tours and sites dedicated to "Gone with the Wind" -- including the Road to Tara museum and the Margaret Mitchell house in Atlanta -- along with emphasis on the work and struggles of its Black actors during a time of abject racism.

The Gone with the Wind museum in Marietta did not respond to requests for comment.

Jessica VanLanduyt, vice president of guest experiences at the Atlanta History Center, which manages the Margaret Mitchell house, told CNN that Covid-19 has forced the museum to close but that the museum strives to help visitors learn how narrative and film impact Americans' views of history.

"We chronicle Margaret Mitchell's life and the legacy of her work, along with the Lost Cause myths and negative, racist portrayals of the enslaved and free Black characters in the book," VanLanduyt wrote in an email. "Both the book and the film depict a romanticized and benevolent view of the Old South and slavery, among other historical inaccuracies. To understand the difference of historical fiction from historical fact, we encourage open discussion on our tours about the content of the book and film, historical evidence and Mitchell's life."

A different Road to Tara

Tara, the name of the film's plantation set in Jonesboro, Georgia, is not a real place. But for 27 years the Road to Tara museum on North Main Street in Jonesboro has taken about 6,500 visitors annually through the fictional story and film production process. Visitors see a couple of real costume pieces, some costume replicas and displays from the film's premiere.

But when Tamara Patridge became executive director of Clayton County Tourism and Film in October 2018, she knew something had to change.

By December 2019 she had completed new exhibits. She replaced the Civil War display, which had shown replica costumes of Confederate soldiers, and converted the space into a display of film and TV shows shot in Clayton County: "The Walking Dead", "Hunger Games" and "Stranger Things".

Patridge said she got a "little backlash from some of our local community. People who were sort of rooted in the old way of thinking that, you know, 'this is our history.' We're seeing, we're hearing the same stories today. You know, 'why did you remove the image of the Confederate flag? That's our heritage.'"

The new exhibits were only on display for a short time before Covid-19 forced the museum to close. When it reopens on July 21, visitors will see last year's changes, including a new portrait near the entrance, of Butterfly McQueen, the Black actress who played the slave Prissy in the film.

To the right upon entering the museum, visitors will see a large copy of a 1937 flyer calling for a boycott of the film, along with a description of protests at that time over the negative stereotypes of African Americans. In response to protests, producer David O. Selznick removed some scenes, including ones with racial epithets. But screenwriter Sidney Howard retained much of the narrative he felt would preserve faithfulness to the text of the novel as written by Mitchell.

"We were able to locate an original boycott and reproduce this here from the Socialist Workers Party," Patridge said. "And, again, here is a photograph of protests in Washington, DC of 1939. And really just some context to state our position. That, you know, it's our responsibility, our duty to provide counterpoint perspective. It's an ongoing project."

Next to the flyer sits an expanded display case on the work of Hattie McDaniel, as well as a small poster signed by African Americans who were extras on the set.

Other exhibit pieces remain unchanged, including the original green velvet hat worn in the film by actress Vivien Leigh, the original pantaloons she wore in a scene with McDaniel and a set of original chairs and carpet from the Loews Grand, where the film premiered.

Johnson said he still has no desire to see the updated exhibit, even though he was pleased with Patridge's changes.

"I didn't even know what the movie consisted of, but I knew enough to know that it wasn't anything positive for people who look like me, and I still feel the same way, despite what [McDaniel] accomplished," Johnson said.

He said he only voiced his discomfort with the film and the county's attraction after Patridge's proposed changes made him feel comfortable enough to break his silence. He said he understands this space is a major tourist attraction for the county.

The museum and the two billboards advertising it are funded by hotel and motel taxes paid by visitors to unincorporated Clayton County, according to Patridge.

Johnson said what McDaniel achieved as an actress was "washed out" by her experience with racism. He said he also believes people who are drawn to the museum aren't there to see the work she did but to support the movie for the "other side, for the oppression."

For Patridge, the notion that fans of the film may not always be acutely aware of the history and oppression makes her task more important.

"It would have been very easy for me to just, you know, turn the lights off, put the closed sign up and say, you know, we're out of business," Patridge said. "But, again, the people who are coming to this museum as a destination, those are the individuals who I think need to learn more."

She plans to change the Clayton County tourism billboards to show McDaniel and McQueen, with words inviting the world to come to Clayton. She hopes to adjust their focus away from emphasizing only "Gone With the Wind", which currently eclipses the new productions filmed in Clayton County.

She also hopes to host a panel discussion about the film. There are no longer any products in the gift shop depicting McDaniel's character, Mammy, without context, and there's now a new t-shirt with a quote from McQueen: "They say the streets are going to be beautiful in Heaven. Well I'm trying to make the streets beautiful here."

But Patridge acknowledges the work is not done. After all, tomorrow is a new kind of day.