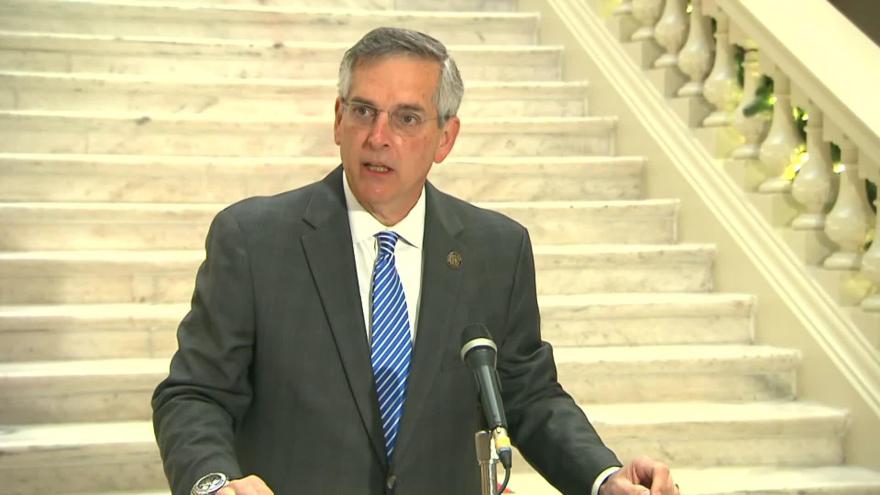 Secretary of State Brad Raffensperger says the recount of election results will show 'no substantial changes.'

(CNN) -- Georgia Secretary of State Brad Raffensperger said Wednesday they have seen "no substantial changes" in the state's election recount and expects to re-certify President-elect Joe Biden as the winner.

News of the looming recount results is yet another blow to President Donald Trump, who continues to baselessly claim widespread voter fraud in the state and has pursued legal challenges in the state. The President has repeatedly attacked Republican state officials, including Raffensperger and Gov. Brian Kemp, for not overturning the outcome in his favor, though the two men have distinguished themselves from other national party leaders by consistently rejecting his claims of fraud.

"We have seen no substantial changes to the results from any county so far. And that's what we expected, and I think that's what most other people have also," Raffensperger said at a press conference from the south stairs of the Georgia Capitol.

He also said 110 counties have finished their work on the recount as of Wednesday morning and he anticipates that all 159 counties in the state will finish their recount by a midnight deadline. Recount results will begin to be posted online starting Wednesday afternoon.

Gabriel Sterling, the voting systems implementation manager for the secretary of state's office, said during the press conference they plan to re-certify the presidential election results on Friday afternoon.

There is no evidence of widespread voter fraud in Georgia, which Biden won by more than 12,000 votes. Nearly 5 million votes were cast statewide.

For weeks, the President has made a series of unfounded claims of fraud in Georgia that state officials have disputed. The back-and-forth over the election results has intensified in recent days, after Joe diGenova, an attorney for the Trump campaign, issued a call for violence against Chris Krebs, a former cybersecurity official who had rejected Trump's voter fraud claims and ousted from his position. DiGenova later tried to walk back his remarks by portraying them as a joke.

Sterling pleaded for Trump and other Republicans to denounce the threats against election workers and officials on Tuesday, saying "it's all gone too far."

Tim Murtaugh, Trump campaign communications director, told CNN on Tuesday that "the campaign is focused on ensuring that all legal votes are counted and all illegal votes are not. No one should engage in threats or violence, and if that has happened, we condemn that fully."

Trump and Vice President Mike Pence are expected to travel to the Peach State this weekend to campaign for Republican Sens. Kelly Loeffler and David Perdue, who are both facing runoff elections in January that could determine which party controls the chamber.

Raffensperger's office announced earlier this week it has launched an investigation into several progressive groups that he says are allegedly registering individuals who are ineligible to cast ballots in the Senate runoff elections.

America Votes, Vote Forward and the New Georgia Project have "repeatedly and aggressively sought to register ineligible, out of state, or deceased voters before the January 5th Senate runoff elections," the state secretary of state's office said in a statement on Wednesday.

Georgia Deputy Secretary of State Jordan Fuchs told CNN on Wednesday that over the last few weeks, their office has received hundreds of reports of absentee ballot requests that are being sent to people who don't actually live in households. Raffensperger also said at Wednesday's news conference that three post cards addressed to his deceased son from the New Georgia Project were mailed to the family's home.

The New Georgia Project denied any wrongdoing in a statement Monday, saying Raffensperger "resurrected a tired and false claim" against the group's "legitimate efforts to register eligible Georgians to participate in elections."

America Votes spokesperson Sahil Mehrotra told CNN in a statement Wednesday that the group has mailed registered Georgia voters applications to "safely and securely vote by mail in the January runoffs" and that the mailings were sent to a voter registration list maintained by the secretary of state.

CNN has reached out to Vote Forward for comment.