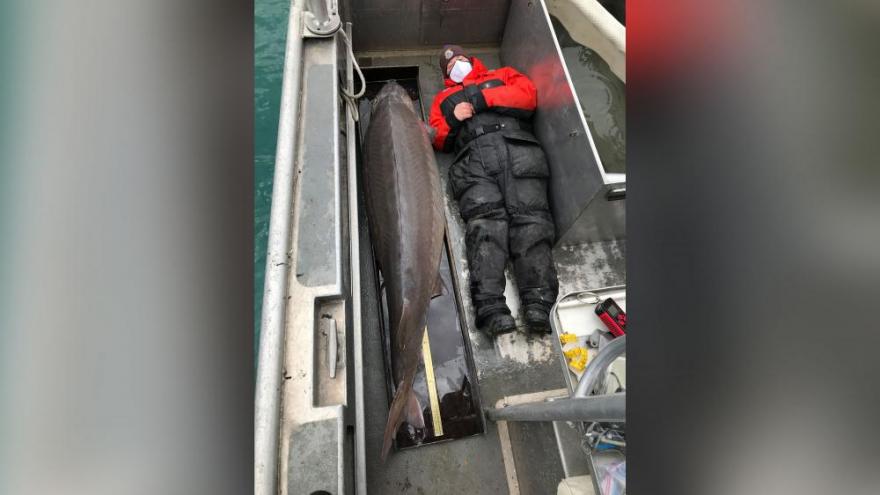 The fish, assumed to be female, was caught in the Detroit River.

(CNN) -- Scientists were in for a shock when they encountered a "real life river monster" -- a giant fish believed to be more than 100 years old.

Staff from the Alpena Fish and Wildlife Conservation Office caught the fish -- a female lake sturgeon measuring 6' 10" and weighing a whopping 240 pounds -- in the Detroit River in April.

Experts think the fish is one of the largest lake sturgeon ever recorded in the US, and based on the creature's girth and size, they said it is assumed to be female and more than 100 years old.

"So, she likely hatched in the Detroit River around 1920 when Detroit became the 4th largest city in America," the Alpena Fish and Wildlife Conservation Office said on Facebook.

Lake sturgeon are freshwater fish that live in North America, from the Hudson Bay through the Mississippi River drainages. The slow-moving creatures, which prefer the sand or gravel habitats on the bottom of lakes or riverbeds, travel up rivers during spawning season.

Male sturgeon have a lifespan of 50 to 60 years, but a female can live up to 150 years, according to the US Fish & Wildlife Service.

The freshwater creatures are listed as threatened in 19 of the 20 states where they are found, with over-harvesting and habitat loss a reason for their decline.

The fish was released back into the river after processing, the service said.