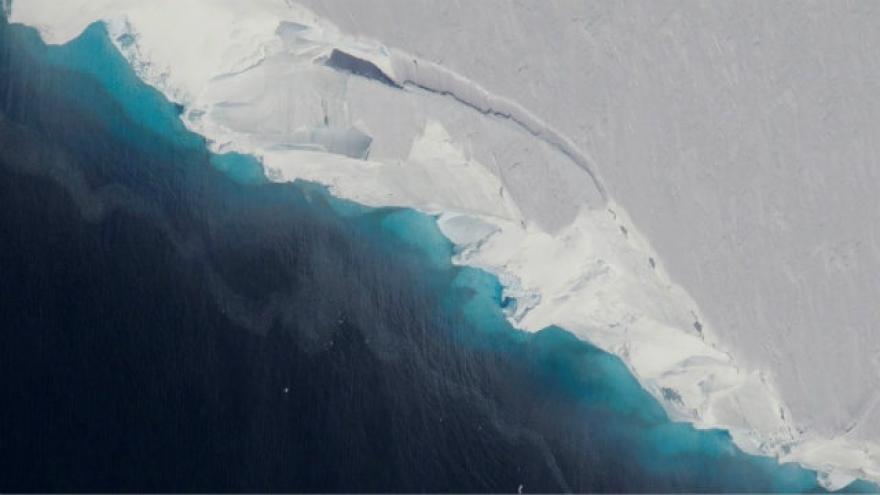 A massive cavity two-thirds the size of Manhattan has been discovered growing in an Antarctic glacier, signaling rapid ice decay that has shocked scientists. Photo courtesy NASA / OIB / Jeremy Harbeck

(CNN) -- A massive cavity two-thirds the size of Manhattan has been discovered growing in an Antarctic glacier, signaling rapid ice decay that has shocked scientists.

The huge hole -- measuring almost 1,000 feet (300 meters) tall -- was found growing at an "explosive rate" at the bottom of a glacier in West Antarctica, said NASA's Jet Propulsion Laboratory in a statement Wednesday.

The Thwaites Glacier is around the size of Florida, and the team of NASA-led scientists researching it had expected to find "some gaps" between the ice and bedrock.

"The size and explosive growth rate of the newfound hole, however, surprised them," they said.

The cavity was "big enough to have contained 14 billion tons of ice, and most of that ice melted over the last three years," they added.

By observing the undersides of Antarctic glaciers, researchers hope to calculate how fast global sea levels will rise in response to climate change.

The Thwaites Glacier is one of the hardest places to reach on Earth, and there's no way to monitor Antarctic glaciers from ground level over the long term, said scientists.

Instead, the team used airborne and satellite ice-penetrating radars to reveal the cavity.

"We have suspected for years that Thwaites was not tightly attached to the bedrock beneath it," said Eric Rignot, one of the co-authors of the study.

"Thanks to a new generation of satellites, we can finally see the detail," he said.

The glacier holds "enough ice to raise the world ocean level a little over 2 feet (65 centimeters)," said the team. Thwaites also "backstops neighboring glaciers that would raise sea levels an additional 8 feet (2.4 meters) if all the ice were lost," they added.

"Understanding the details of how the ocean melts away this glacier is essential to project its impact on sea level rise in the coming decades," Rignot said.