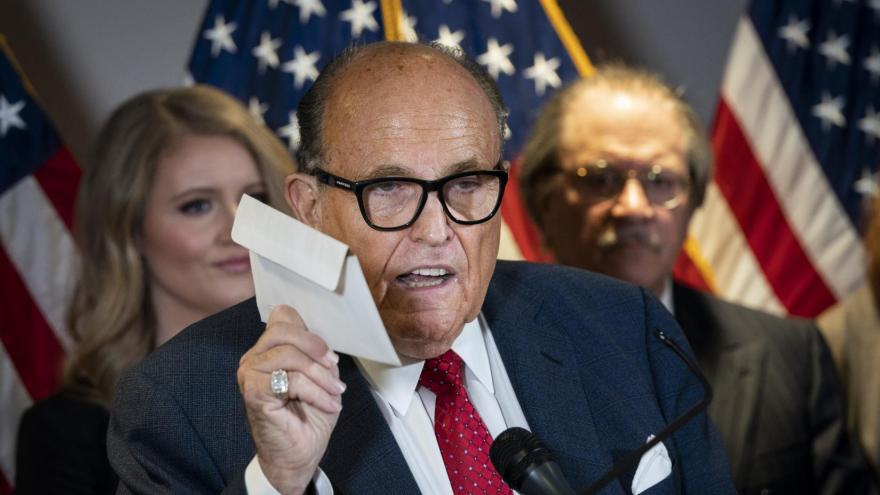 (CNN) -- Rudy Giuliani, President Donald Trump's personal attorney and the face of his longshot legal challenges to overturn the presidential election results, has been hospitalized after testing positive for Covid-19.

The 76-year-old former New York mayor was admitted to Georgetown University Hospital on Sunday, a source familiar with the matter confirmed to CNN. Giuliani appeared to confirm his positive diagnosis, hours after it was announced on Twitter by Trump, by tweeting that he's "getting great care and feeling good."

There have been no additional details provided about his condition, and it is unclear when Giuliani received a positive test for Covid-19. He and his spokeswoman have not responded to CNN's requests for comment.

The news immediately raised concerns about the extent to which Giuliani, who has frequently appeared maskless while crisscrossing the country in recent weeks to advance Trump's baseless claims of election fraud, may have spread the virus among public officials. Sunday night, it was announced that the Arizona state legislature -- where Giuliani had appeared at the beginning of last week -- would be closed for the upcoming week over Covid-19 concerns.

Giuliani's diagnosis, the latest positive test for a prominent member of Trump's inner circle, also further undercuts the President's frequently repeated and misleading claim that the US is "rounding the corner" in its fight against the coronavirus. The nation is seeing a record number of hospitalizations of Covid-19 patients, a surge in deaths and experts and health care workers fear things will only get worse, with a potential spike of infections fueled by Thanksgiving travel and gatherings.

Giuliani, who is considered at higher risk for complications from the coronavirus due to his age, has repeatedly disregarded public health guidelines, appearing maskless in state capitols, hotel ballrooms and at indoor news conferences in recent weeks. At many of the events, most of the other people in the indoor settings were also not wearing masks.

At some of those events, Giuliani was spotted shaking hands, hugging and taking pictures with people while not wearing a mask.

Giuliani has also eschewed US Centers for Disease Control and Prevention quarantine guidelines after his son Andrew, as well as close contact and campaign adviser Boris Epshteyn, tested positive in late November. The day Epshteyn announced he had tested positive, Giuliani traveled to Gettysburg, Pennsylvania, where he addressed a group of Republican state lawmakers in a crowded hotel ballroom.

Most recently, Giuliani was at the Georgia Capitol in Atlanta on Thursday to attend a state Senate hearing about the November election. During a break in the hearing, Giuliani removed the mask he was wearing to greet and take pictures with supporters.

He traveled to Michigan on Wednesday for a state House committee hearing that lasted four and a half hours, during which he was maskless as he pushed misleading claims that the election was stolen from Trump.

At the beginning of the week, Giuliani was in Arizona, meeting with some GOP members of the state's legislature to discuss unsubstantiated allegations that the election was fraudulent.

The Arizona Senate will be closed this week due to coronavirus concerns, Mike Philipsen, communications director for the body, confirmed to CNN in an email Sunday night. Members and staff will be working remotely, Philipsen said.

Philipsen told CNN he was not aware of any positive tests among Senate legislators.

The House will also be closed, according to the Arizona Capitol Times.

Georgia Democratic state senator Elena Parent, who attended the hearing at the Georgia Capitol on Thursday with Giuliani, told CNN that Giuliani and his team "willingly endangered all of us to pander to Trump."

"It was reckless and irresponsible for the Georgia Senate Republicans to hold an in-person hearing without requiring masks and social distancing during a pandemic. Clearly the COVID risk from (Giuliani) and team, who have been attending hearings maskless all around the country, was high and they willingly endangered all of us to pander to Trump," Parent said in a statement emailed to CNN Sunday.

She added, "Mayor Giuliani's blatant disregard for public safety measures in this pandemic is irresponsible and puts Georgians in danger."

The Trump campaign said in a statement late Sunday night that Giuliani tested negative twice "immediately preceding his trip to Arizona, Michigan, and Georgia" last week. The campaign added that Giuliani did not experience any symptoms or test positive for Covid-19 until more than 48 hours after his return. The former New York mayor had been interviewed on Fox News via satellite hours before Trump announced his diagnosis Sunday afternoon.

Trump campaign communications director Tim Murtaugh declined to comment on Giuliani's condition or whether campaign attorney Jenna Ellis, who has appeared at Giuliani's side at all of the events about the 2020 election in the last week, has tested positive or plans to quarantine. He referred CNN to tweets by Trump and Ellis, who called for "prayers for Mayor @RudyGiuliani" and called him a "tough warrior." She vowed the President's legal team will continue its efforts to overturn the election results.

Last month, Andrew Giuliani, who is a White House staffer, tested positive for Covid-19 after attending a Trump campaign legal team news conference with his father in Washington, DC.

The elder Giuliani is the latest person in the President's orbit to contract the virus. The President, first lady Melania Trump, his sons Donald Jr. and Barron, his chief of staff Mark Meadows and a number of other top aides both in his campaign and in the White House have tested positive in recent months.

As the number of Covid-19 cases and deaths have been on the rise, the White House has continued to flout CDC recommendations and host large events without masks and little social distancing.

This story has been updated with an additional statement from the Trump campaign.