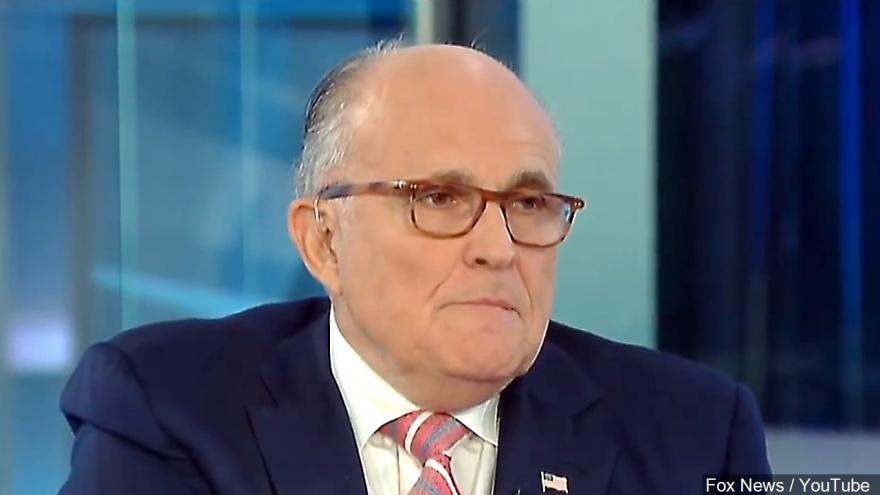 Giuliani called the Trump campaign's effort to get political help from representatives of the Russian government possibly ill-advised but not illegal.

The Sunday news shows offered the latest back and forth following the long-anticipated release on Thursday of Mueller's 448-page redacted report on his two-year investigation into Russian interference in the 2016 presidential election. Mueller found no evidence of a conspiracy between Russia and the Trump campaign and made no decision on obstruction of justice.

Giuliani rebutted Sen. Mitt Romney, R-Utah, who said in a statement on Twitter Friday he was "sickened" by the findings in Mueller's report that cited details on how the Trump campaign welcomed political dirt from Russia.

Giuliani said Romney should "stop the bull," saying that accepting negative information about a political opponent is common. "I would have advised, just out of excess of caution, don't do it," he said. Nevertheless, "there's no crime."

Pressed about whether there is a something wrong about using information stolen by foreign adversaries, Giuliani said, "It depends on the stolen material."

Trump, who spent the holiday weekend at his private Mar-a-Lago club in Palm Beach, Florida, asserted in tweets Sunday that he had been fully cleared by Mueller's report and that Democrats' continued efforts to investigate him will prove politically costly.

"Despite No Collusion, No Obstruction, The Radical Left Democrats do not want to go on to Legislate for the good of the people, but only to Investigate and waste time. This is costing our Country greatly, and will cost the Dems big time in 2020!" he tweeted.

Mueller explicitly did not exonerate Trump in the report on the question of obstruction, citing in part Justice Department guidelines that a sitting president shouldn't be indicted.

Not ruling out impeachment, Rep. Jerrold Nadler, who chairs the House committee that would hold impeachment hearings, said he remained puzzled why Mueller did not bring charges of criminal conspiracy against those in the Trump Tower meeting.

Nadler said it was now up to Congress to investigate after the special counsel said it did not establish enough evidence to bring charges of criminal conspiracy, yet detailed 10 allegations of Trump's attempts to obstruct the Russia investigation that left open whether Trump broke the law.

Asked whether the offenses are impeachable, Nadler told NBC, "If proven, some of this would be impeachable, yes." He said Democrats' current focus is to "go where the evidence leads us."

Nadler has subpoenaed the Justice Department for the full, unredacted report and said Sunday he was adding former White House counsel Don McGahn to the list of people he would call to testify before his committee, along with Mueller and Attorney General William Barr. According to the special counsel's report, McGahn was among the Trump aides who effectively halted Trump's efforts to influence the Russia investigation, rebuffing his demand to set Mueller's firing in motion.

Nadler has said he expects the Justice Department to comply with the subpoena for the full report by May 1, the same day Barr is to testify before a Senate committee and one day before Barr is to appear before Nadler's panel. Nadler summoned Mueller to testify by May 23.

Democratic leaders are under mounting pressure from the party's rising stars and some 2020 presidential contenders, including Sen. Elizabeth Warren of Massachusetts and Julian Castro, a former Housing and Urban Development secretary, to start impeachment proceedings.

House Speaker Nancy Pelosi, D-Calif., is pushing for a step-by-step approach to the House's oversight of Trump and has refused to consider impeachment without public support, including Republicans. Pelosi is convening House Democrats on Monday to assess next steps.

Sen. Mike Lee, a member of the Judiciary Committee, said it would be a "mistake" for Democrats to pursue further investigations that could lead to impeachment proceedings, arguing that the American public won't stand for it after Mueller failed to conclude that crimes had been committed.

Giuliani said Trump's legal team was weighing whether it would release a detailed written rebuttal to the Mueller report.

"It may become necessary, whether they go ahead with the hearings or not, whether other issues are raised by different people — there's probably a point at which we'll use it. Right now we think the public debate is playing out about as well as it can," he said.

In the redacted report, Mueller said he considered bringing charges over the Trump Tower meeting but ultimately did not obtain admissible evidence that the campaign officials involved knew the actions were illegal. The meeting had raised questions about whether Trump Jr. and others violated the federal ban on foreign contributions to American political campaigns.

"On the facts here, the government would unlikely be able to prove beyond a reasonable doubt that the June 9 meeting participants had general knowledge that their conduct was unlawful," the report stated. "The investigation has not developed evidence that the participants in the meeting were familiar with the foreign-contribution ban or the application of federal law to the relevant factual context."

Giuliani spoke on CNN's "State of the Union," ''Fox News Sunday" and NBC's "Meet the Press." Nadler also appeared on NBC. Lee was on CBS' "Face the Nation."

For complete coverage of the Mueller report, go to https://www.apnews.com/TrumpInvestigations