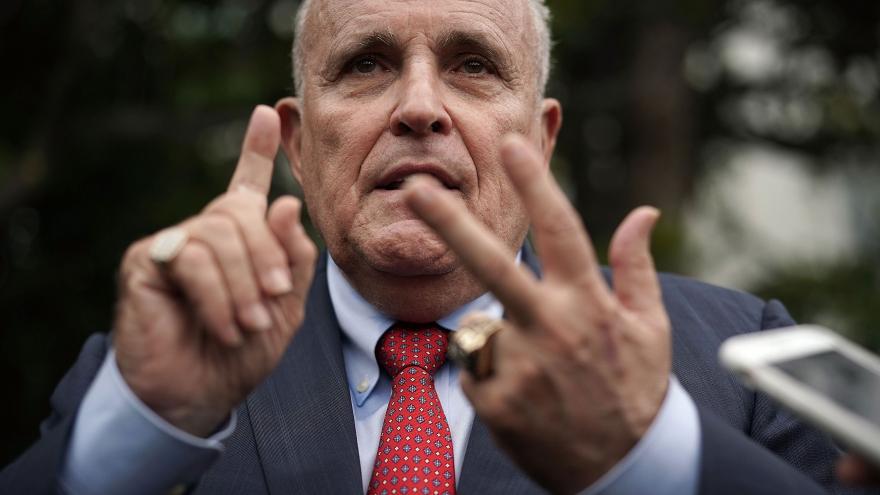 (CNN) -- Career diplomat George Kent told congressional investigators in his closed-door testimony this week that Rudy Giuliani asked the State Department and the White House to grant a visa to the former Ukrainian official who Joe Biden had pushed to have removed when he was vice president, according to four people familiar with Kent's testimony.

Kent, the deputy assistant secretary of state for European and Eurasian affairs, testified that around January 2019 Giuliani requested a visa for former Ukrainian prosecutor-general Viktor Shokin to travel to the United States. Shokin had been pushed out of his position as Ukraine's top prosecutor in 2016 after pressure from Western leaders, including Biden, over concerns that he was not pursuing corruption cases.

Giuliani has previously told CNN he wanted to interview Shokin in person because the Ukrainian promised to reveal dirt on Democrats.

Kent told congressional investigators the State Department had objected to the request, and State did not grant the visa. Giuliani, Kent said, then appealed to the White House to have State reverse its decision. Shokin's visa was never granted, although Giuliani eventually spoke with Shokin over Skype.

The incident reveals how Giuliani's work to dig up dirt on Democrats went much further than previously understood -- and included an attempt to directly influence the actions of the federal government. Concerns that Giuliani was inappropriately involved in shaping and driving the administration's Ukraine policy form a significant part of the intelligence community whistleblower's complaint, which prompted the ongoing impeachment investigation into President Donald Trump.

Giuliani did not reply Friday to questions from CNN. The White House did not respond to request for comment. Kent's lawyer declined to comment for this story.

When asked about the matter, a State Department official said that visa records are confidential under US law and the department does not discuss the specifics of individual cases.

Generally, visa applicants are required by US law to be interviewed by a consular officer at a US diplomatic mission. A visa application can be denied for a number of reasons, including if the reviewed information falls "within the scope of one of the inadmissibility or ineligibility grounds of the law," the State Department's website says.

In their January 23 Skype interview, Shokin provided information, Giuliani has told CNN, about supposed coordination between Democrats and people in Ukraine, as well as claims about Biden's son Hunter Biden, who had sat on the board of a Ukrainian energy company, Burisma Holdings. Shokin's successor as prosecutor general, Yuriy Lutsenko, did travel to the US and spoke with Giuliani about these claims later.

According to a write-up of his interview with Shokin included in the documents, Giuliani claimed that Shokin "believes the current Ambassador Marie L. Yovanovitch denied his visa" and noted that Yovanovitch was "close to Mr. Biden." In her recent testimony to the House Intelligence Committee, Yovanovitch said she has met Biden "several times over the course of our many years in government, neither he nor the previous Administration ever, directly or directly, raised the issue of either Burisma or Hunter Biden with me."

Giuliani's efforts to push a smear campaign against Yovanovitch ultimately led to her removal from her post in May.

But Shokin also had a damaged reputation among plenty of US and European diplomats. Dogged by criticism he had not pursued corruption aggressively enough, Shokin was forced to resign as Ukraine's top prosecutor in 2016 after both internal pressure and pressure from Western governments and financial institutions.

Among the leading advocates for Shokin's resignation was Biden, who at the time led the Obama administration's anti-corruption efforts in Ukraine.

Shokin has claimed, Giuliani has told CNN, that Biden pushed for his removal in order to stop an investigation into Burisma. There has been no evidence the Obama administration's push to remove Shokin was linked to stopping this investigation, which had been dormant for two years before the time of Shokin's resignation.