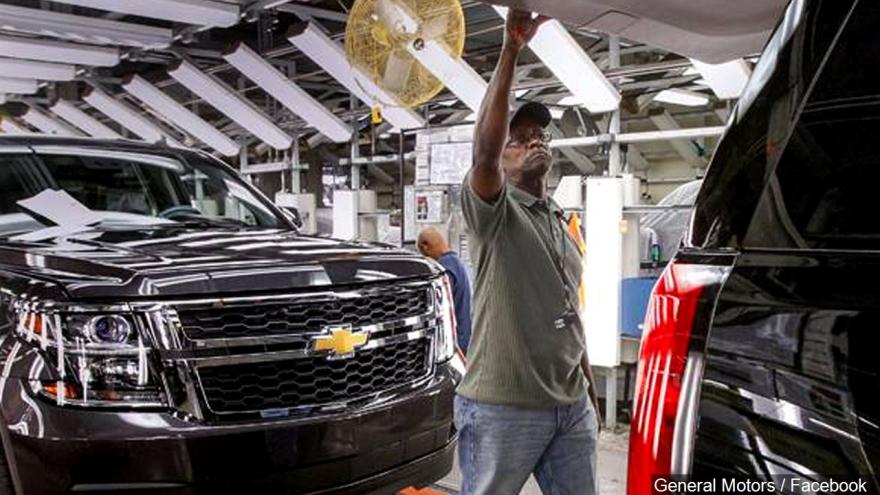 LORDSTOWN, Ohio (AP) — With too many factories making slow-selling cars, General Motors can't afford to keep them all operating without making some tough decisions. But the political atmosphere might be limiting its options.

A possible scenario, analysts say, is to close its sprawling Lordstown plant in northeastern Ohio because the compact car it makes also is built in Mexico. The once-bustling factory already has lost two of its three shifts and 3,000 union jobs since the beginning of last year.

But moving that car, the Chevrolet Cruze, south of the border brings the risk of provoking a backlash and tweetstorm from President Donald Trump. And GM also isn't sure whether he'll make good on threats to impose 25 percent tariffs on vehicles imported from Canada and Mexico.

Also at issue is that the Cruze plant just outside Youngtown is in a Democratic and labor stronghold, where Trump won over a surprising number of voters two years ago by reaching out to what he called America's "forgotten men and women."

At a rally near the plant last summer, Trump talked about passing by big factories whose jobs "have left Ohio," then told people not to sell their homes because the jobs are "coming back. They're all coming back."

Three are running on one shift per day, which is inefficient and costs GM money. Automakers like to run plants on at least two daily shifts.

To deal with the overcapacity, GM will either have to eat the added costs, close one or more plants, or retool them to build trucks and SUVs that now are favored by U.S. buyers.

GM's closest competitors, Fiat Chrysler and Ford, plan to scrap most car models and convert plants to trucks and SUVs. GM, however, recently revamped much of its car lineup and banked on sales stabilizing. But last month, trucks and SUVs reached a record 68 percent of U.S. new-vehicle sales.

In the U.S., automakers have enough factory capacity to build about 14 million vehicles per year, but last year they manufactured only 11 million. More than one-third of that idle capacity — 1.3 million vehicles — is in the five GM car plants that are operating at 37 percent capacity, said Kristin Dziczek, a vice president at the Center for Automotive Research, an industry think tank.

GM car plants are operating at 37 percent of their capacity, she said. Many truck and SUV plants, however, several of which run three shifts a day, are at 105 percent capacity.

So that leaves the automaker with the three choices: Run plants under capacity and risk reduced profits, close at least one plant and move its product to another, or move products to the U.S. from other countries, mainly Mexico, to fill the underused factories.

GM, which imports some of its profit-rich pickup trucks from Silao, Mexico, and SUVs from China, would be hard-pressed to absorb the tariff cost. So in order to say competitive, it would move, Dziczek said.

"They'd look to convert as much as they can to build what everyone is buying," she said.

Moving products back to the U.S. could keep the car factories open and save existing jobs. If enough vehicles came back from other countries, the companies could add jobs. Currently, the five GM plants have about 7,400 hourly workers.

While all this plays out, there's plenty of angst in Lordstown, where the GM plant is one of the region's few remaining industrial anchors.

UAW Local 1112 President Dave Green said he's not sure what Trump's threat of tariffs will mean for the plant's future.

"I don't necessarily have a lot of faith that our president knows what he's doing," Green said. "I'm a little concerned he may be just shooting from the hip."

While the UAW nationally endorsed Hillary Clinton for president in 2016, many Lordstown workers, including Eric Vasko, voted for Trump.

"He said he would bring work back to the United States to keep it from going to Mexico," said Vasko, who has worked at Lordstown for the past 18 years. "I'm sure a lot of people voted for him because of that."

Two of Ohio's most prominent Democrats — U.S. Sen. Sherrod Brown and Rep. Tim Ryan, who represents the Youngstown area — both said they have talked with GM CEO Mary Barra but came away without any commitment to keeping the Lordstown plant running.

What really angered Ryan and the plant's workers was that on the day Lordstown's second shift ended in June, GM announced plans to build its new Chevrolet Blazer in Mexico.

"Salt in the wound," Ryan said. "That's what upsets you; that's what gets you fired up."

GM spokeswoman Kim Carpenter would say only that the company is continually looking at global operations "for greater efficiency and capacity utilization."

Although GM could convert some car plants and add new SUVs, that won't be enough to utilize all of its excess car-building capacity, said Navigant Research analyst Sam Abuelsamid. "In all likelihood we'll almost certainly see one, maybe two plants closing," he said.

Further complicating GM's factory dilemma is the United Auto Workers, which has a contract that expires next year. Closing a plant before negotiations could bring a national strike, or could provoke a strike during the contract talks.

Already the UAW's leadership has taken a harder line than in the past, blasting GM's decision to build a new version of the Chevrolet Blazer SUV in Mexico when U.S. workers at car plants are unemployed.

"GM employs over 15,000 production workers in Mexico, pays the workers less than $3 per hour and exports over 80 percent of the vehicles to the U.S. to sell here," new Vice President for GM Terry Dittes said in a statement. "This is all happening while UAW-GM workers here in the U.S are laid off."