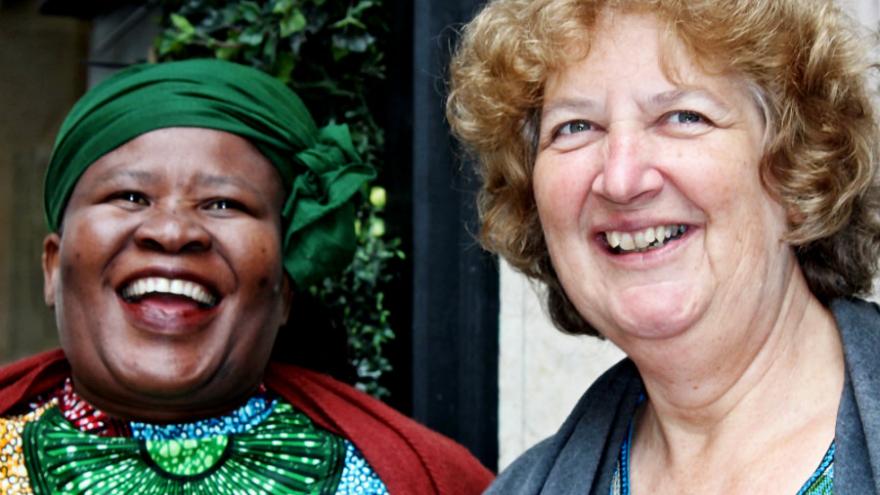 (CNN) -- It was the ultimate David versus Goliath battle.

For their herculean efforts, Makoma Lekalakala, 52, and Liz McDaid, 55, were awarded the prestigious 2018 Goldman Environmental Prize on Monday.

"These were hard won gains," Lekalakala said on being awarded the Goldman prize. "But for us the whole thing was about holding our leadership accountable to the people. We really fought for it."

The highly-coveted Goldman prize is awarded annually to six people from six different continents who undertake "sustained and significant efforts to protect and enhance the natural environment, often at great personal risk."

The activists challenged the proposed nuclear deal in court on the grounds that negotiations were kept secret and an agreement was reached without parliamentary debate in South Africa.

In a landmark ruling on April 26, 2017, a High Court in Cape Town pulled the plug on the nuclear deal, declaring it unlawful and unconstitutional.

Other nuclear power deals South Africa had signed with corporations in US and South Korea were also voided by the court.

The government's attempt to put the state power utility company Eskom in charge of procurement instead of the country's electricity regulator was also declared illegal.

The ruling also stated that all nuclear proposals in South Africa must get a public hearing and parliamentary approval.

The energy minister at the time said it would not appeal the case and indicated it would seek new deals with parliament consultation. "We will try our level best to start signing new agreements," said Minister Mmamoloko Kubayi-Ngubane in a statement.

Suing the South African government was the last thing on their minds when the pair stumbled upon the secret deal in 2014.

But the government's reluctance to answer questions forced Lekalakala and McDaid to take the case to court.

"We just had to take a different route," Lekalakala says.

For almost two years, Lekalakala and McDaid held public protests, brought other environmental lobbyists into their fold and mobilized a strong campaign force of mostly women.

"Women were able to understand very quickly the link between having not enough money right now at a household level to buy electricity and the problem of having even more expensive electricity if the nuclear deal went through," McDaid says.

"It was actually quite affirming that people were recognizing the role that women could play in such a campaign."

"Little money was raised because people were saying this is risky, nobody wanted to be linked to having supported this court case," Lekalakala said

They found a lawyer, Adrian Pole, who agreed to take the case on pro bono, buying them time against the government's attempts to stall the case.

"The government, they tried to wear us out and hoped that we run out of money for the lawyers," McDaid said. "In every step of the legal process they would ask for a delay."

In 2014, South Africa, then under the leadership of Zuma, appointed Russian energy company Rosatom to build nuclear plants worth one trillion rand ($76bn). When completed, the project would yield 9.6 GW of power, according to government figures.

The environmental activists say they were alerted to the deal when Ecodefense, a Russian environmental organization, spotted details of the plan on Rosatom's website.

"They sent it to us asking if we are aware of it," says Lekalakala, a director at Earthlife Africa (ELA).

South Africa's government denied knowledge of the deal when confronted and an article on the agreement was taken off the Russian contractor's website, Lekalakala says. "That told us that there was something fishy going on."

Many countries have cut back nuclear programs after the 2011 disaster in Fukushima, South Africa is one of the few that consider such projects in its energy mix despite the environmental and health impact it poses to residents in areas where nuclear stations are located.

Zuma's administration pushed for a nuclear program though government forecasts and studies showed the country did not need it for 20 years as electricity demands continue to drop in the country.

"So this is not about energy but the way that the processes have been manipulated and twisted so it benefits a few," McDaid says. "It was about the greed of a few individuals."

McDaid, climate change coordinator at SAFCEI, believes the nuclear deal would have bankrupted the country.

The agreement, which she claims, had been negotiated without a competitive tender process also posed serious threats to South Africa's economy.

"The proposed budget for this one project is equivalent to the country's annual budget," McDaid says.

"You can imagine we don't have that money, so we have to borrow it."

McDaid's secondary objection to the proposed project was the potential for mismanagement.

"Nuclear energy like any other big project gets delayed, it's easy for money to disappear along the way" she says. "That's money that could be going into the development of people in the country."

Zuma quit as President of South Africa in February after a series of corruption scandals which saw his party calling for his resignation.

South Africa's former president faces 16 counts of corruption relating to a 1990s arms deal. He has repeatedly denied any wrongdoing.

The fight is not over for the activists, however. Despite the ruling, both women continue to fight attempts to resurrect additional deals that could jeopardize South Africa's environment.

"We are kind of both aware that it never seems to die, it just seems to go away for a while and then resurrects itself," says McDaid.

"Our role is to keep working together with communities and take them along in the fight," Lekalakala adds.

They have been calling on the South African government to close Koeberg -- the country's only nuclear power station over concerns about its disaster management plans.

For the last 30 years, nuclear waste from Koeberg's reactor has been buried in the Namaqualand desert, home to the indigenous Nama people who say they were never consulted on the decision to host the nuclear waste site on their land.

"Basically the court case hit the reset button," McDaid says. "There's an opportunity now with the change of president.

We don't see this particular regime fast tracking nuclear but the concern is the power of the bureaucrats to influence the political will of the government and potentially convincing them that there is still a space for nuclear."