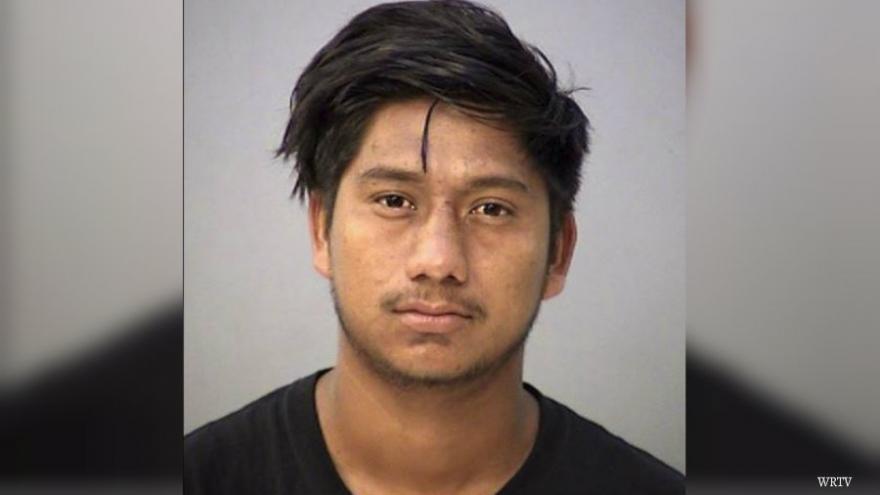 INDIANAPOLIS, Indiana (WRTV) -- An unlicensed driver who caused a 69-year-old man to crash was arrested Monday evening after a good Samaritan followed the suspect and led police to him.

Indianapolis Metropolitan Police Department officers responded to a hit-and-run near the intersection of Belmont and Washington Streets just after 8 p.m.

Indianapolis resident Benjamin Edwards says he was picking up a part at AutoZone on West Washington Street when he saw the accident.

"I was standing in the parking lot when I heard a loud crash," said Edwards. "I look up and I see this blue Toyota Corolla pushing another vehicle which I believe to be a Cavalier up onto the sidewalk."

Edwards said the Corolla took off and he felt the need to follow him.

Edwards said he boxed in the driver until police arrived.

When officers arrived, they noticed Jorge Hernandez-Diaz’s car had new damage to the front passenger’s side.

The victim, Stanley Ballinger, told police he was driving on westbound when someone sideswiped his vehicle and fled the scene.

"I was just passing through the intersection of Washington and Belmont and all of a sudden somebody hit me and pushed me off the road," said Ballinger. "I got the car stopped and I looked up and in the distance, I saw what looked like a blue or silver car speeding off... I may have been thinking a few things that I'm not going to repeat."

Police arrested Diaz for leaving the scene of an accident and driving without ever having a license.

Diaz could not provide a statement to police on the scene because he did not speak English.

Edwards is also an Uber driver but says he was not on-duty when he chased down the suspect.