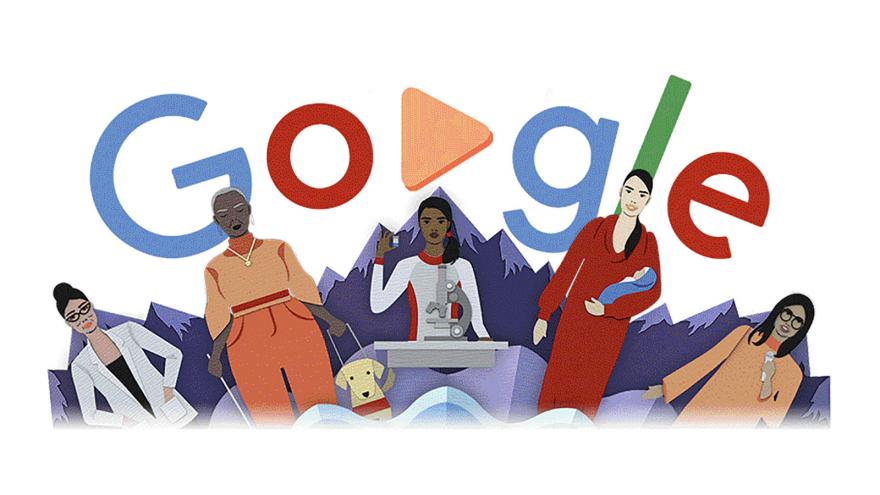 (CNN) -- Google's doodle for International Women's Day celebrates the achievements of women of all geographic and generational backgrounds.

Clicking the play button on the doodle prompts a multi-layered, paper mandala animation video created by two female duos: Julie Wilkinson and Joyanne Horscroft of Makerie Studio and animators Marion Willam and Daphne Abderhalden, according to a news release.

The mandala's black-and-white inner layer depicts women around the world from the late 1800s to the 1930s. The middle layer reflects women from the 1950s to the 1980s, which Google describes as "a landmark era in the wake of pushes for gender equality and rapid changes to the status quo."

The outer layer symbolizes women from the 1990s to the modern day, documenting what Google says are the results of progress made over more than 100 years of women's rights movements.

"It pays tribute to breaking barriers from former cultural and gender roles, as women continue to question, reclaim and redefine ideas about the roles women take on in society," Google says.

The doodle portrays women of various occupational backgrounds, from educators and gymnasts to pilots and homemakers.

"There was so much thought put into each of the 35 characters and how they were placed within the mandala," said Abderhalden, who works at DRASTIK GmbH in Zurich, in a Q&A on Google's site. "Starting from the center, it walks us through different time periods and depicts the issues women were facing in these times. Our biggest takeaway from the artwork is that we were reminded of how women fought and evolved through history so we can live the free life we live today."

Doodles for previous International Women's Days have focused on the diversity of women's hobbies, the word "women" in several languages and doodles crowd-sourced from female artists.

International Women's Day, celebrated annually on March 8, also brings awareness to the obstacles that still stand in women's way. The history of the celebration stems from the early 20th century, starting with labor movements across North America and Europe.

The first International Women's Day was celebrated by members of the women's movement in Russia on March 8, 1913, to peacefully protest World War I. After World War II, countries from all continents took the hint and began using March 8 to advocate for women's equality. More than 100 years later, numerous events take place to honor women's achievements and highlight what still needs do be done to achieve gender equality.

International Women's Day is given a theme every year by the United Nations -- this year's is "I am Generation Equality: Realizing Women's Rights," which focuses on equality and human rights for all women and girls.

"We drew a lot of inspiration from the history of International Women's Day and its humble roots, showing how the movement has grown exponentially over the years," Wilam said in the news release. "We loved the idea of visually representing the number of women involved in each stage, from the Suffragettes to women today, and portraying how their freedoms (have been) gradually expanding as the movement has evolved."

To champion women throughout March during Women's History Month, you can donate to a related cause, attend a festival or simply tell the women in your life how much you appreciate them.

"Without these women, the world would look much different," Abderhalden said.