Google Maps incognito mode mostly hides you from you 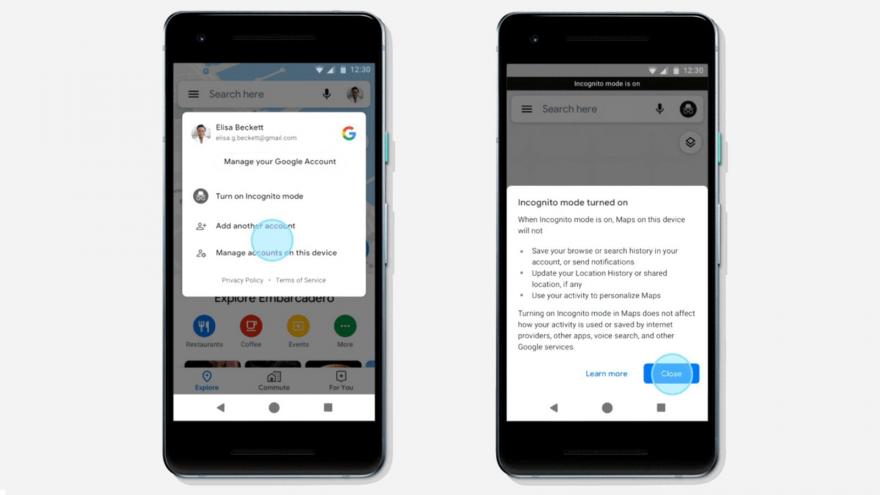 (CNN) -- A new incognito mode on Google Maps may make it easier to obscure your search history. But that doesn't mean the app won't be tracking your whereabouts.

The company announced this week a series of new privacy tools across its various apps, including a mode that lets you cut down on recording where you're going or where you've been and pause location sharing. (Those locations won't be saved to your Google account and the app won't use them to suggest destinations to you).

But the feature, which is available on Android now and coming to iOS soon, has significant limitations. "Turning on Incognito Mode in Maps does not affect how your activity is used or saved by internet providers, other apps, voice search, and other Google services," the company clarifies in a message.

In other words, it mostly lets you hide your location history from yourself.

Although you'll be able to have better control over your history and future maps requests, Google isn't going out of its way to anonymize that data before sending them to third parties.

Google did not immediately respond to a request for comment.

"Remember, Google's business model is based primarily on collecting your personal data and selling it to third parties," Cornell professor of electrical and computer engineering Stephen Wicker told CNN Business. "Your map activity is still available to third parties for the purpose of marketing and manipulation."

The mode, which needs to be manually turned on within Google Maps, already exists on other Google products, including its Chrome browser and YouTube.

"Incognito mode has been one of our most popular privacy controls since it launched with Chrome in 2008," Eric Miraglia, Google's director of product management and data protection officer, wrote in a blog post Wednesday.

In Chrome, a warning pops up when you switch on incognito mode to tell user activity could still be visible to websites you visit, your employer or school and your internet provider.